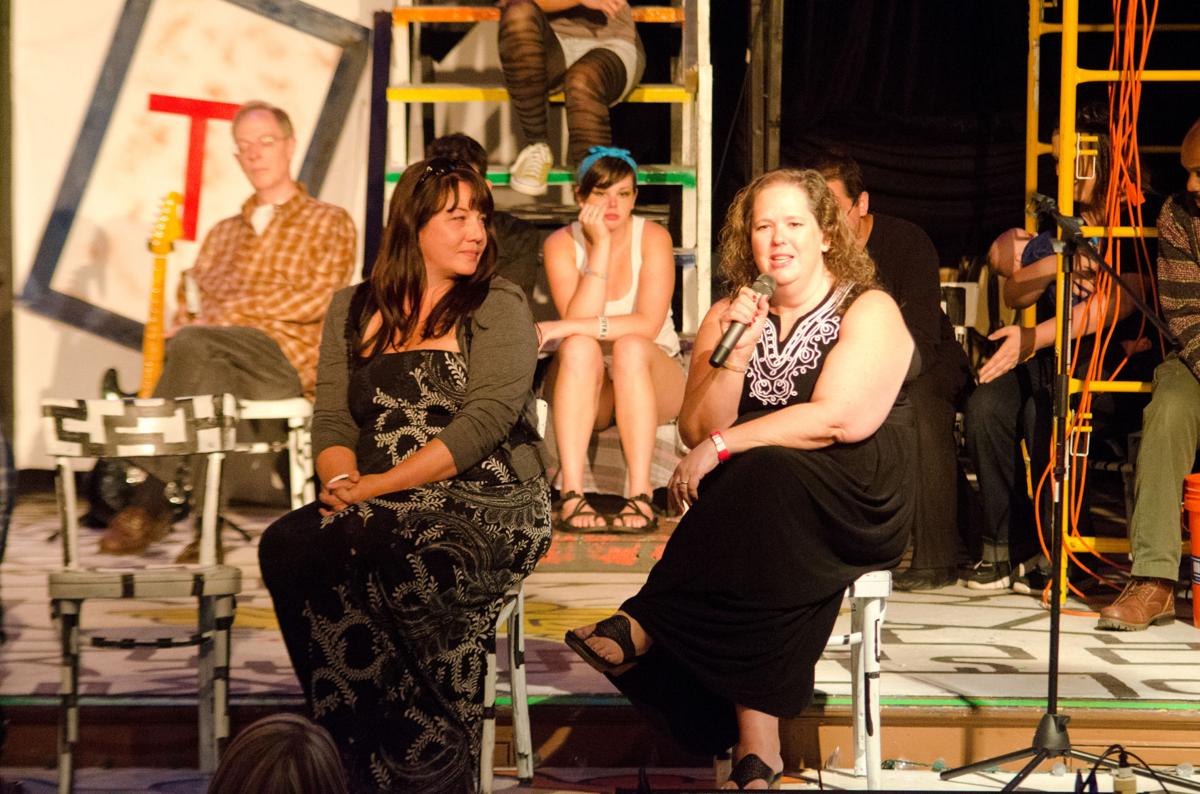 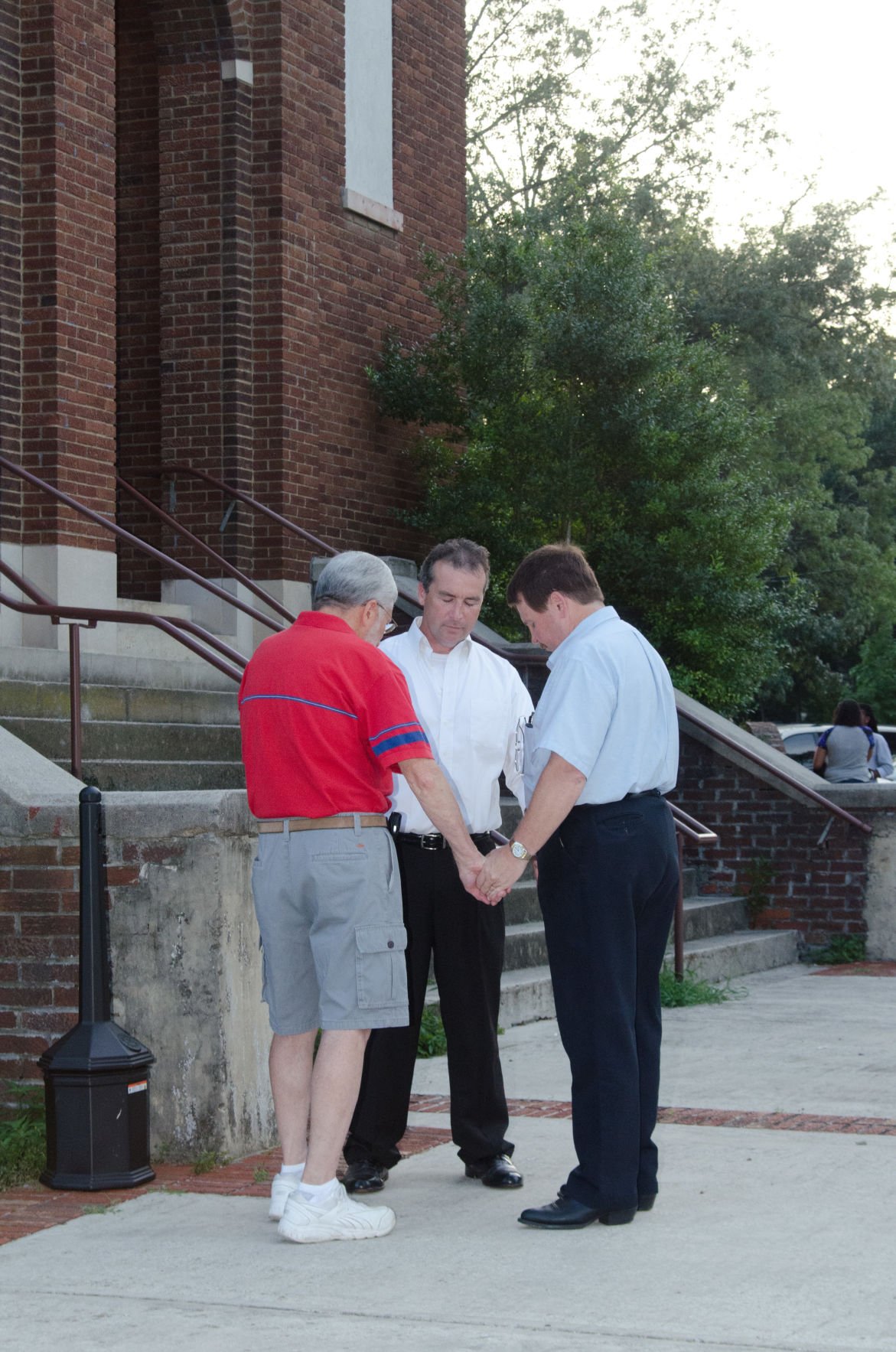 As the first act of the PACT production “Rent” neared its end Friday night at South Jackson Civic Center, an audience of roughly 200 broke into supportive applause mid-song as actors sang the line, “Let he among us without sin be the first to condemn.”

Pastors Jim Zidan (center) and Wayne Wester (right) prayed for the community prior to PACT’s opening performance of ‘Rent.’

It was a response borne of the controversy that had drawn many of them to the opening night performance of Jonathan Larson’s 1996 rock opera, the local staging of which drew national attention last week when area pastors Jim Zidan and Wayne Wester publicly expressed their opinion that the show’s adult themes (drug use, homosexual relationships and AIDS) were inappropriate for production by the “Performing Arts for Children and Teens” group.

When it became clear that both Zidan and Wester would host a prayer for the community on Civic Center grounds before the show on opening night, the show’s producers prepared for a protest.

However, as “Rent” cast members monitored the proceedings from the side of the building, apparently ready to break into song if the prayer escalated into protest, the small and nearly silent prayer circle consisting of Zidan, Wester and “concerned citizen” Peter Traversa opened only once to admit a fourth comer wishing to join the pastors in prayer.

Also quietly monitoring the situation opposite the cast was New York theatre advocate Howard Sherman, the former executive director of the American Theatre Wing whose blog post on the small town controversy went viral in the week before the show.

Sherman, in his current role as the director for the Arts Integrity Initiative at the New School for Drama, had flown to Tullahoma on that initiative’s mission to “examine and take an active role in instances of censorship.”

“I’m here because they are doing ‘Rent’ and there are people who think they shouldn’t,” said Sherman.

While the controversy certainly helped to advertise the show, Zidan said neither he nor the other pastors involved had ever planned to stop or disrupt the performance.

“They can do ‘Rent’ every weekend if they want,” said Zidan on Friday. “We don’t want to be a part of anything divisive. My agenda is to get the community to respond to this. It’s the community theatre.”

To be clear, the PACT program is a sub-group of the South Jackson production company and is not affiliated with the Civic Center’s resident community theatre group, Community Playhouse, Inc., which shares performance space with the other producing groups.

By opening night, Zidan had come to understand that only three of the cast members were under the age of 18 and that each had gotten parental consent to participate, but he still maintained the show was inappropriate for production by the children and teens group and he wanted to know more about how “Rent” came to be produced under the PACT umbrella.

In a post-show talkback with the audience, PACT assistant director Erik Petersen addressed that issue.

Petersen said that to “mitigate community pushback” the board of directors had considered producing the show under the South Jackson umbrella but had decided against it.

“We thought, ‘No, we’re doing this show for our teens and young adults that have grown up in PACT. They’ve matured into wonderful, beautiful people. This show is for them and to take PACT off of that bill and to produce it without PACT’s name really completely defeats the purpose of the message we’re trying to send, which is that regardless of how you feel about these issues, it is okay to think about them.

But if “Rent” is truly the coming-of-age reward to long-time “PACTors” who’ve paid their dues performing the program’s more child-friendly fare, it is notable that among the mostly adult cast that resulted from allowing only those over age 16 to audition, participating “PACTors” were largely relegated to the ensemble while a surprising number of opening night lead actors (there are two casts in rotation) were making their South Jackson debut.

Still, whether “PACTors” were in the forefront like three-year participant Fallon Endsley in the role of “Maureen” or in the ensemble, their tear-filled eyes as the crowd erupted into an elongated standing ovation (the duration of which was as much an appreciation of the cast’s perseverance as it was of their talents) made it very clear that in the face of adversity, opening the show at all was more important to them than landing a lead role.

“One of the gifts of the performing arts is that it allows us to address issues that we sometimes like to sweep under the carpet and not think about or talk about,” said talkback moderator, Rev. Sharon B. Austell. “This production has done a fantastic job of bringing to the forefront issues that some of us would like to think only happen in New York City and other big metropolis (sic) areas. They happen here, right here in this town and in little towns like this across this country.”

“If Jesus Christ were here today, at the turn of the millennium, this is the community he would be dwelling in. This is where he would be speaking and ministering.”

Psychotherapist Tamela Sadler, who counseled the cast during the rehearsal process, said the actors had been “very courageous” in mounting a production that had “exposed them not only to prejudice and bias and dealing with life-threatening illness and love and loss, but it also dealt with some touchy subjects concerning sexuality and how we live our lives.”

From the audience, Matt Collins of the Well Church spoke to the opportunity that the producers had given the community to publicly question the play and its contents after the show.

“As a pastor in the community, it’s not my job to regulate or try to manipulate morality. I’m not here to do that. I’m not here to judge anyone or condemn anyone,” said Collins. “I have never struggled with homosexuality or same-sex attraction but, man, I’ve struggled with heterosexual sins my whole life. I came here tonight to tell you that Jesus loves you, I love you and you’re all welcome at the Well Church.”

The PACT production of “Rent” continues this weekend 8 o’clock performances Friday and Saturday (plan to arrive when the house opens at 7:30 as IDs will be checked); and closes with a 2:30 Sunday matinee.