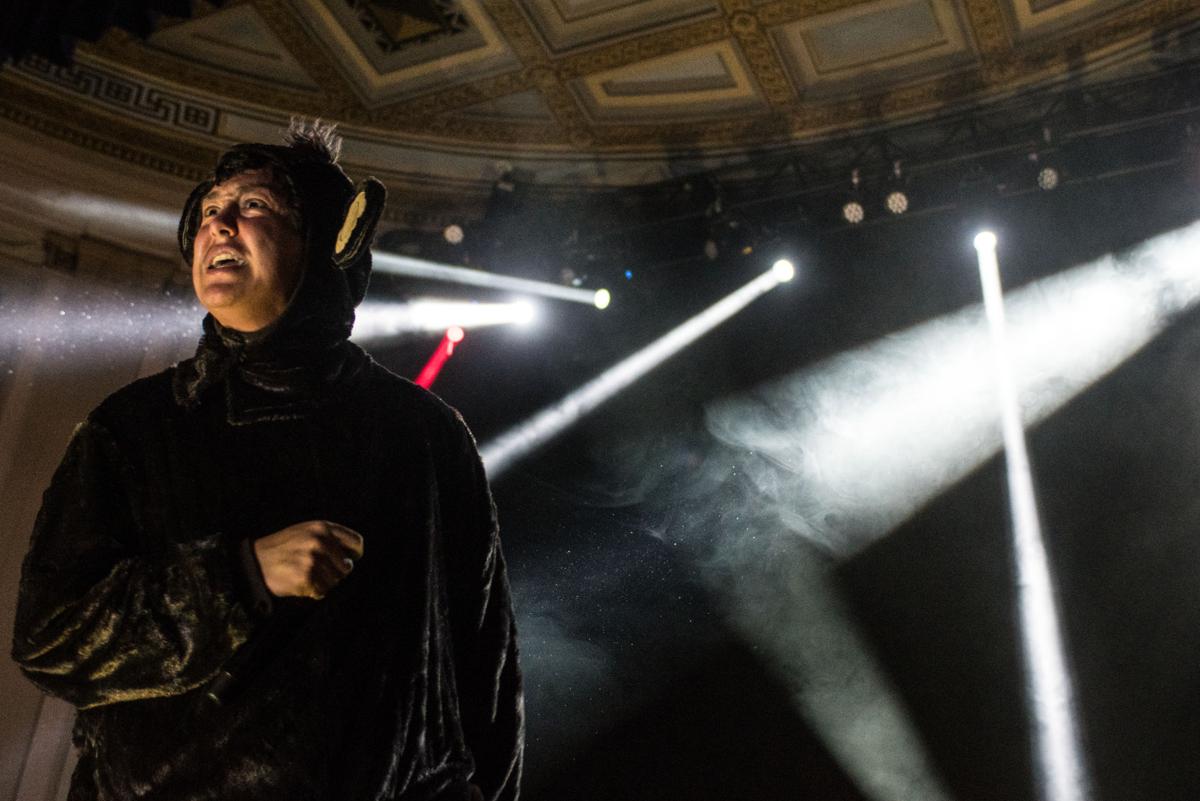 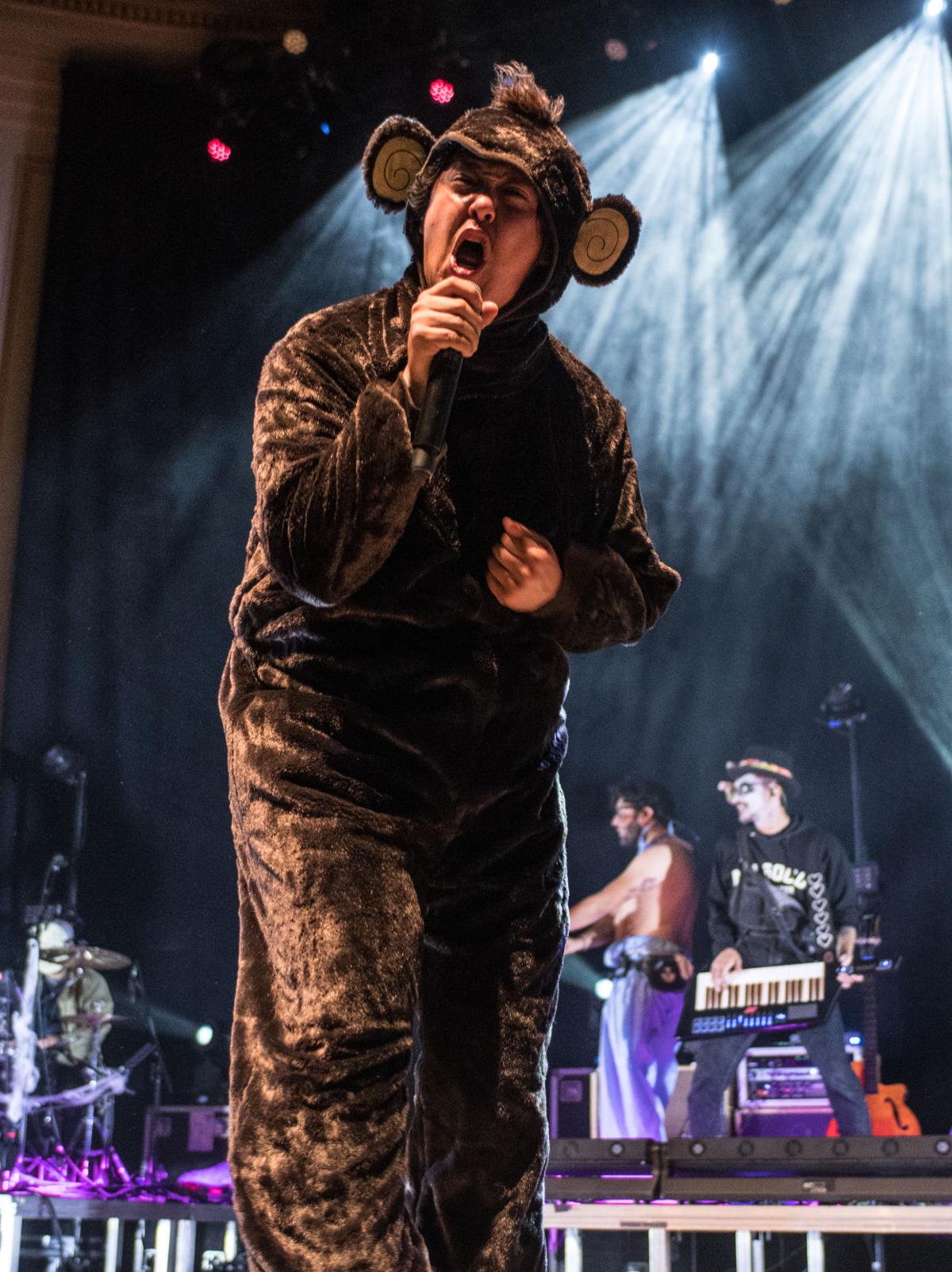 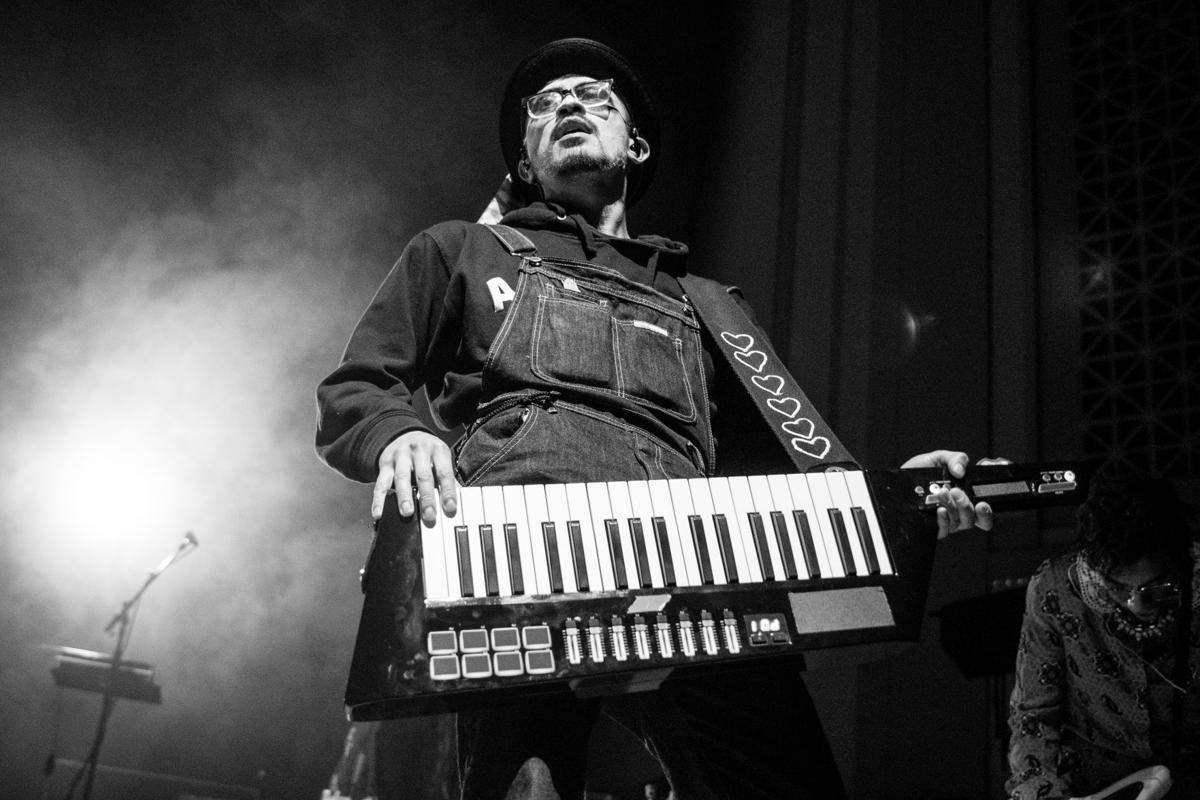 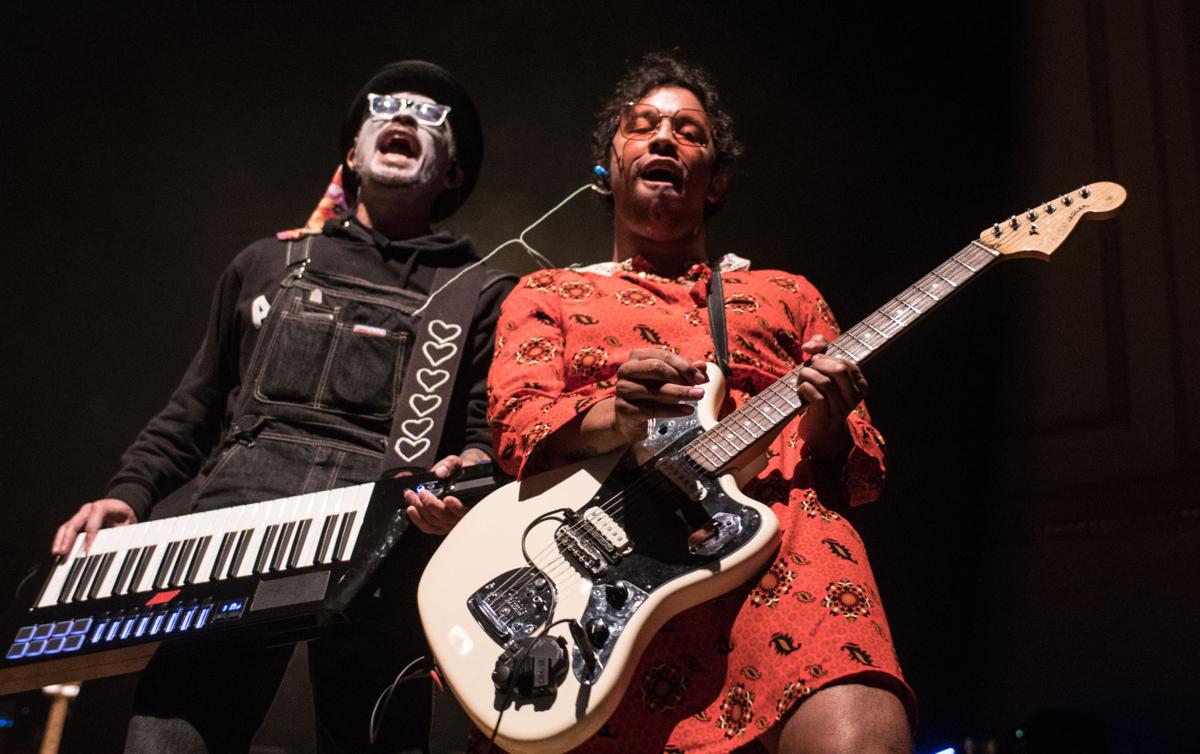 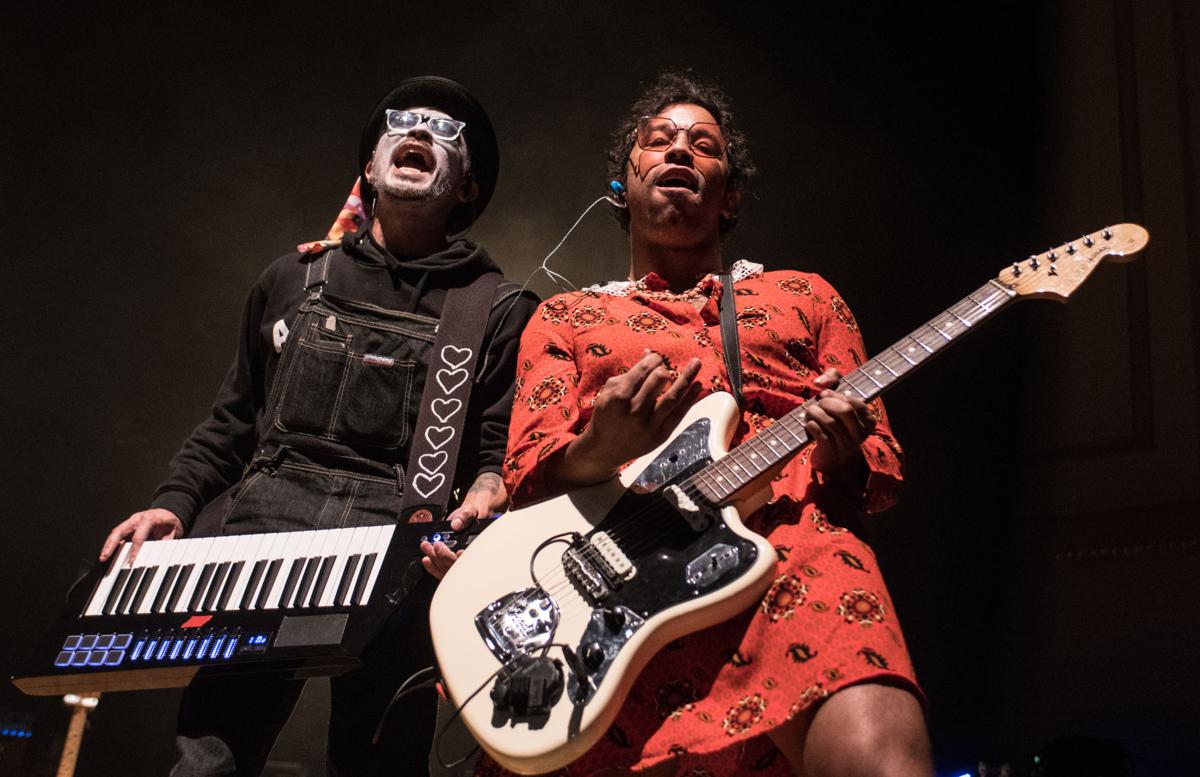 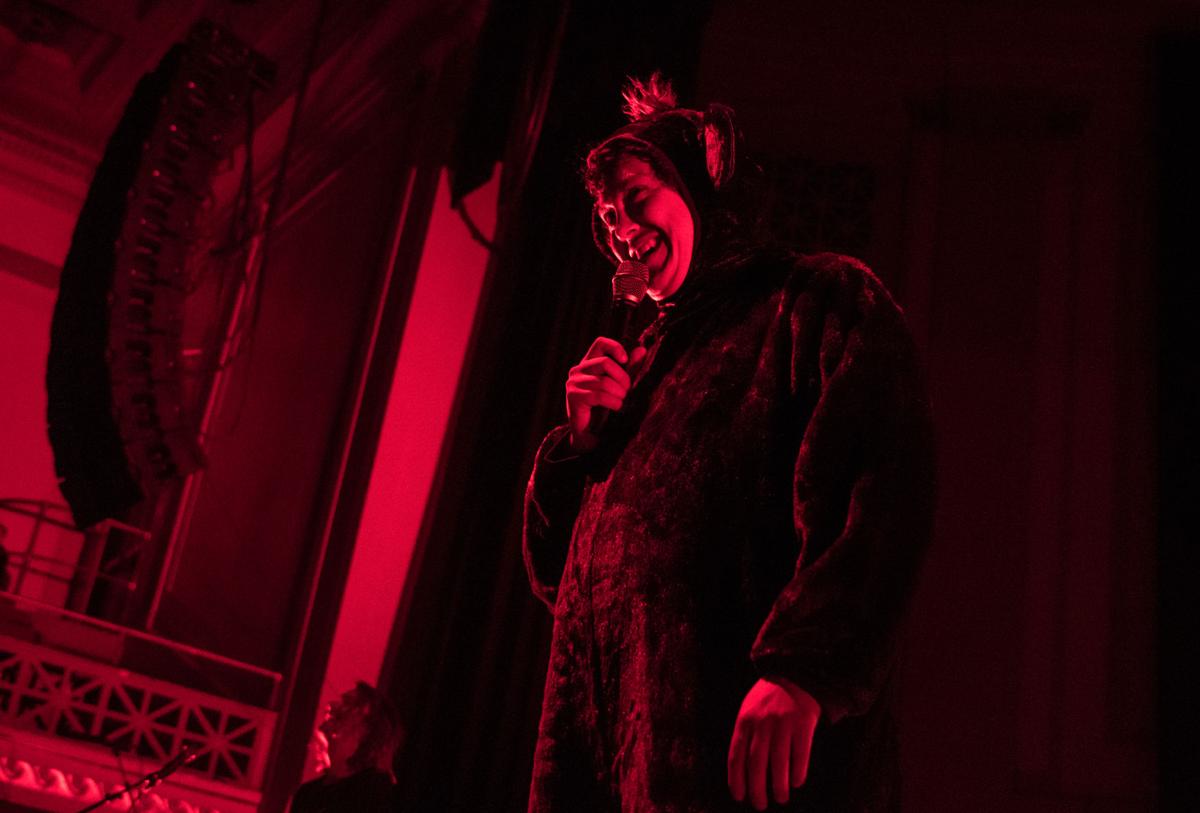 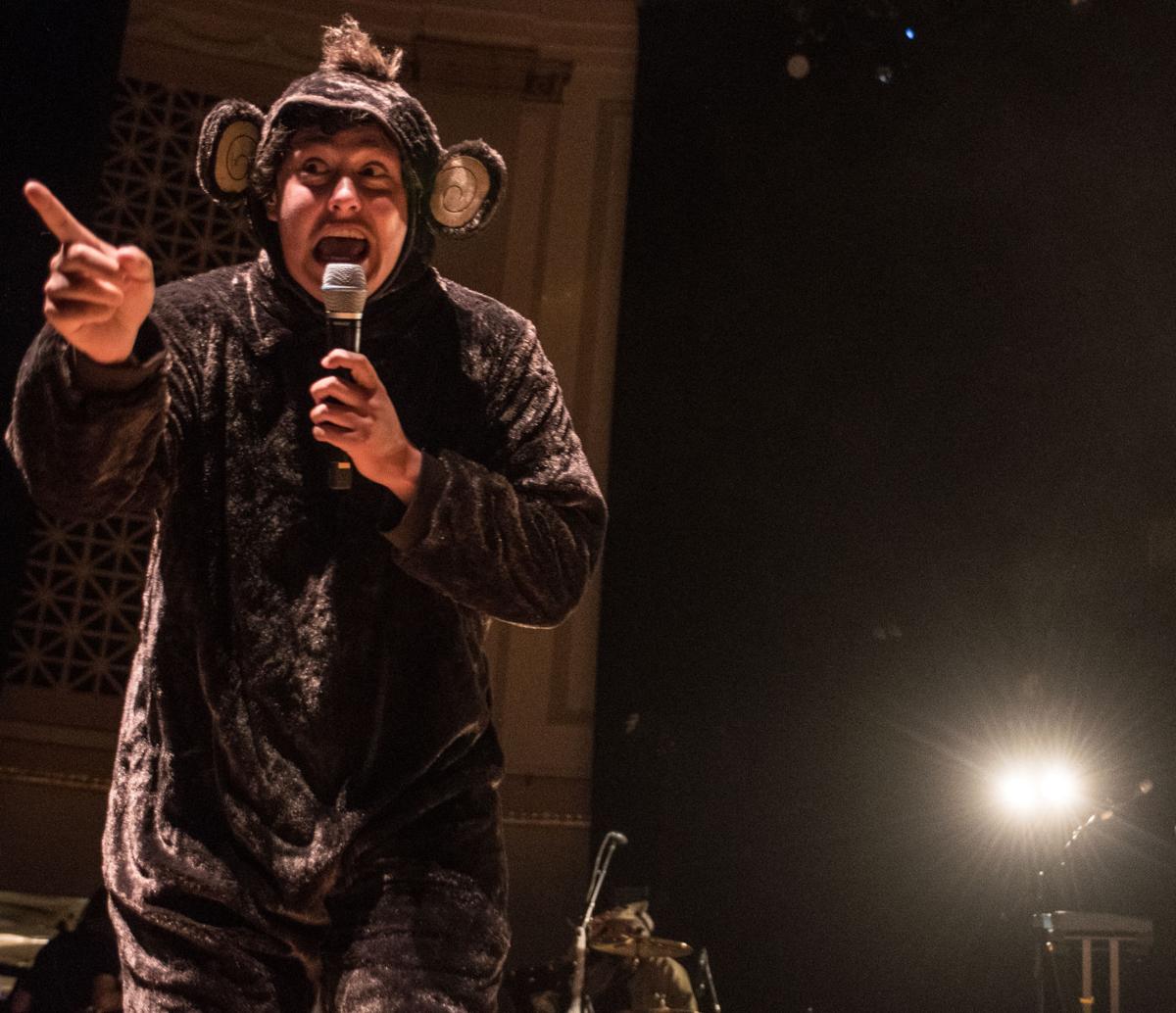 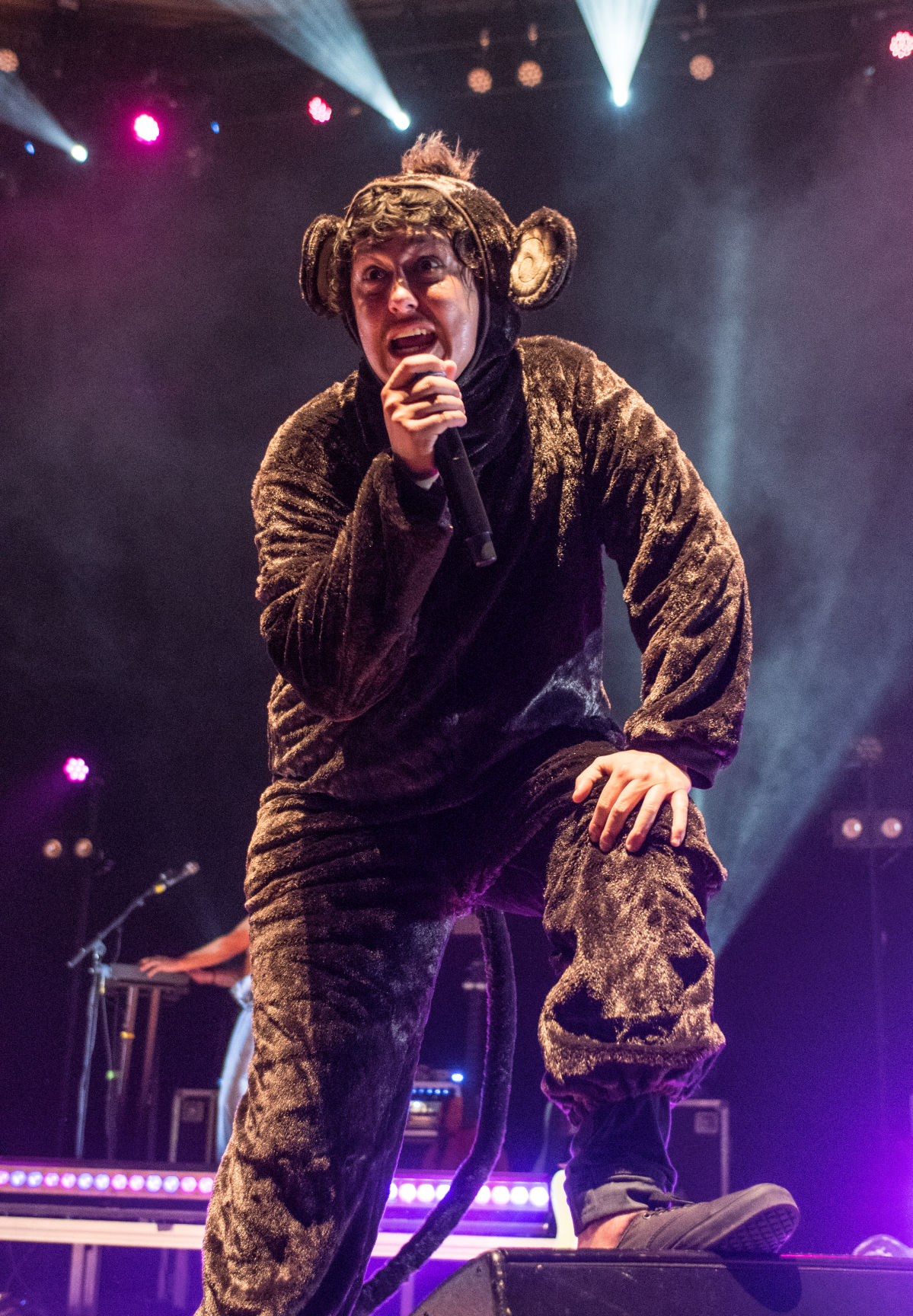 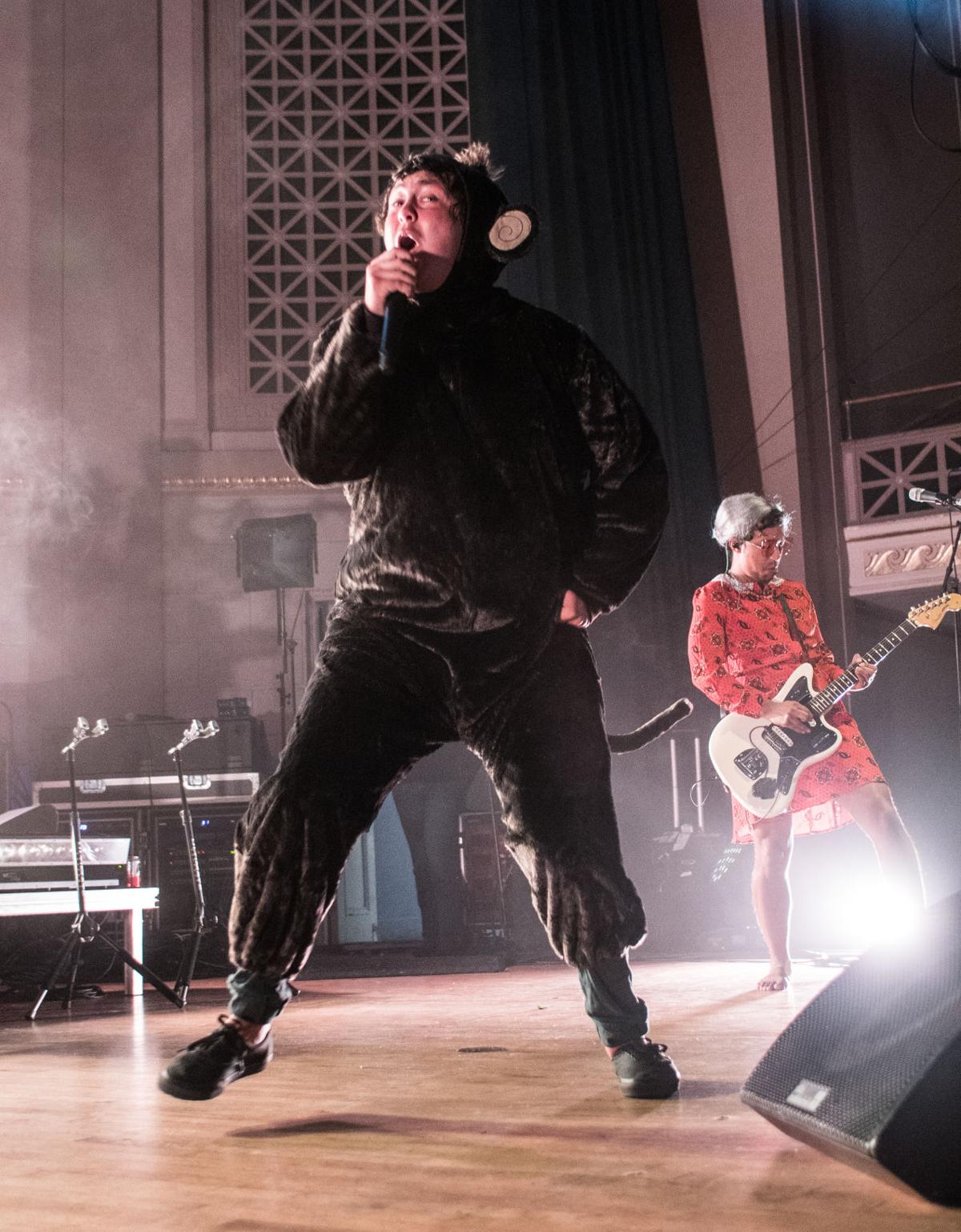 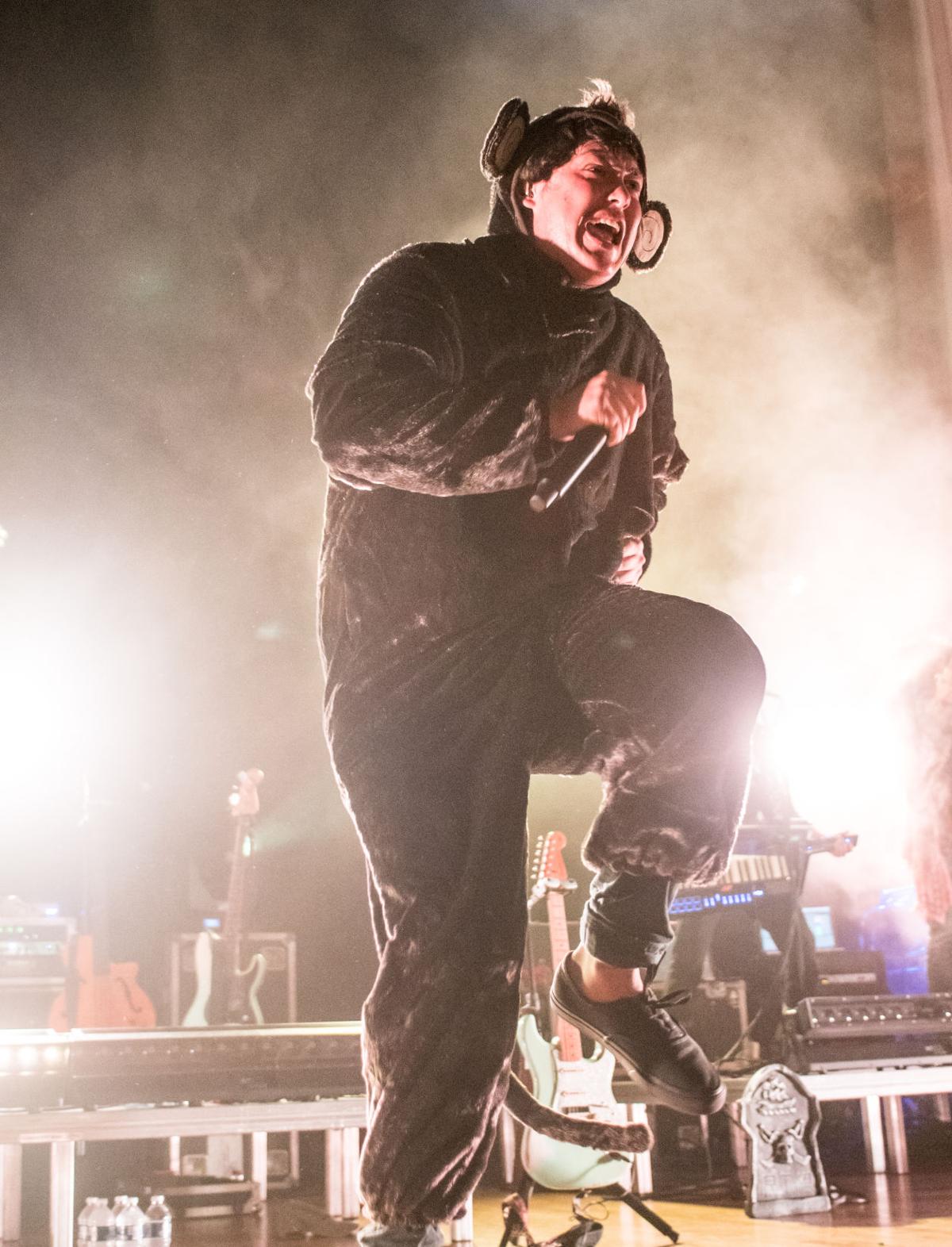 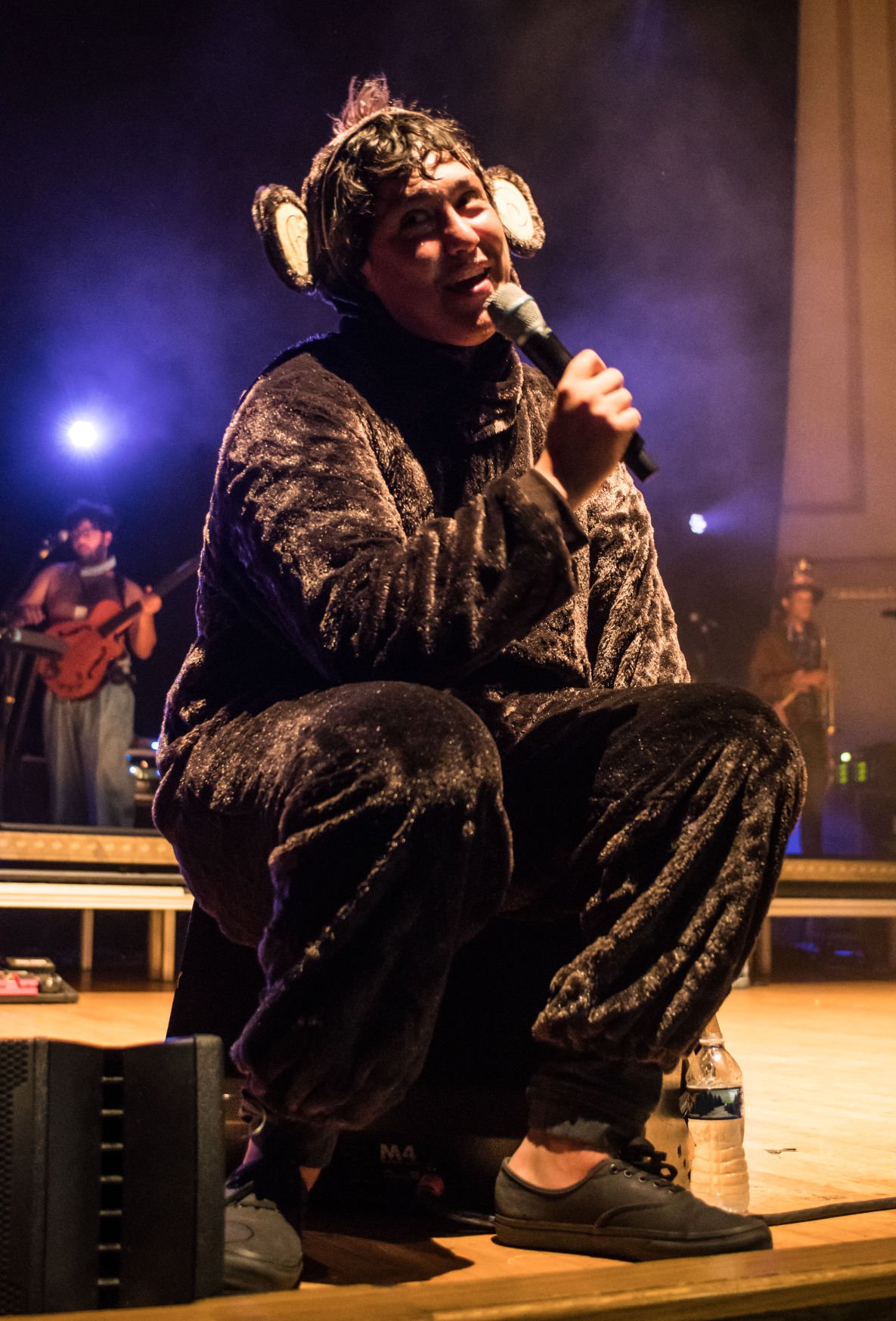 For Nashville it was a little bit of both at Hobo Johnson at War Memorial Auditorium on Halloween.

Fresh off the release of his second album, “The Fall of Hobo Johnson,” the singer/rapper brought his tour, sharing the same name to Music City. Adding some fun to the mix, Johnson and his backing band, otherwise known as The Lovemakers, dressed in costume. But, that right there just encapsulates what Johnson is all about.

There are times on his second record, when he gets deeply personal, talking about his relationships, the hurt he’s put people through, and the pain that he’s experienced in his life. Johnson performed a few of those tracks in Nashville, including “Happiness,” a track where he talks about trying to crush a loved one’s dream.

The remorse and guilt that he feels looking still felt genuine, as he uttered the words so passionately as if it were the first time that those lines had come out of his mouth. Throughout the night, it felt like Johnson was close to being on the verge of tears – and it wouldn’t surprise me if at times he had to wipe away some.

Then there were the moments on Thursday, and on the record, when he’s just straight up goofy. So much so that the crowd couldn’t help but interact with him, even throwing some candy at him, and once a vape pen, which he caught, and smoked from, before throwing it back into the audience.

Those nuances are what made Johnson’s show unique and really a treat to be at. However, he did have some tricks up his sleeve as well. Here are three standout moments from the Halloween show.

How is Subaru not sponsoring Hobo Johnson yet?

It should be no surprise that Johnson has a background in slam poetry. On Thursday night, he requested that Nashville join him, as delved into one his poems – one talking about the advantages of owning a Subaru Crosstreck XV.

That’s right, Johnson has a track on his newest album that highlights his car. As a he put it, “I would have bought a Lambo, but I’m not quite there yet.”

It goes much deeper than him being aware of his financial state. No in fact, he takes it a step farther, taking about the safety details, and much more.

As Johnson, said at the end of the performances, “I’m not getting paid a single dime for that one.” Which then leaves the question, what does a man have to do to get a sponsorship, Subaru?

“Open up the pit”

Prince Charles missing hugs with his family during Covid-19 pandemic

Late into his set though, Johnson told the fans, that a song that he was getting ready to perform slapped so hard.

“I am so absurdly confident in this next song being what you guys need tonight that there’s no way that I could possibly curtail my excitement,” Johnson said. “I am so f- excited… You’d better sing along and when I say open up the pit, that mean’s open up the f- pit.”

In true joking style though, the piano intro led to a cover of Vanessa Carlton’s “A Thousand Miles.” Johnson wasn’t joking though as he screamed at the crowd multiple times to “Open up the pit,” even spraying the crowd with a water bottle to lead off the song.

It made for one of the more fun moments of the evening. But, it wasn’t the only cover on his setlist. After leaving the stage, Johnson and The Lovemakers returned for a cover of “September” by Earth Wind &Fire, which had the room dancing.

“Sometimes the songs that aren’t yours are the best one,” Johnson said after his Carlton cover.

Maybe that’s true. But, when done with the goofiness and pure joy like Johnson, it makes the performance memorable.

Revert to the hits

As the lights turned off on Thursday as the band was taking the stage, the opening notes to Taylor Swift’s “Love Story,” came on the speakers played the song. The crowd reacted, bellowing out the words.

That was until the chorus came on. The track then split, as Johnson and The Lovemakers headed straight into “A Typical Story,” a song off the newest record that has found success on the radio waves. While delving into the newer tracks were great to see live, it was the “hits” that garnered the most reaction from the audience.

Late in the set, Johnson told a goofy story about him trick or treating one year. Long story short, the story was bogus, and led him to performing “Peach Scones.” That track gained Johnson a following after his NPR Tiny Desk set of the song. Needless to say, there were plenty of phones recording the performance on Thursday.

The Fall of Hobo Johnson Tour continues through Nov. 30. A full list of dates can be seen online at hobojohnson.com/shows.