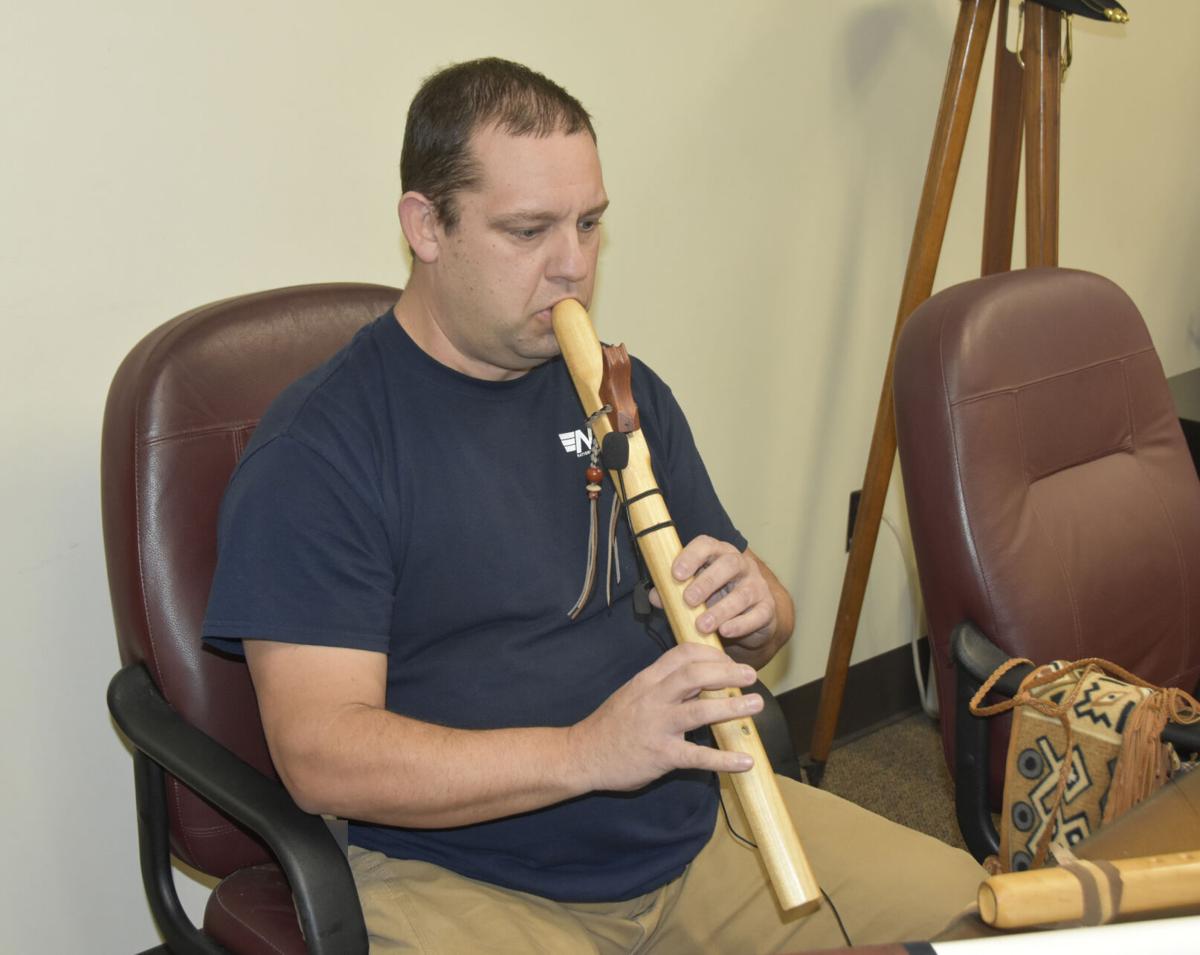 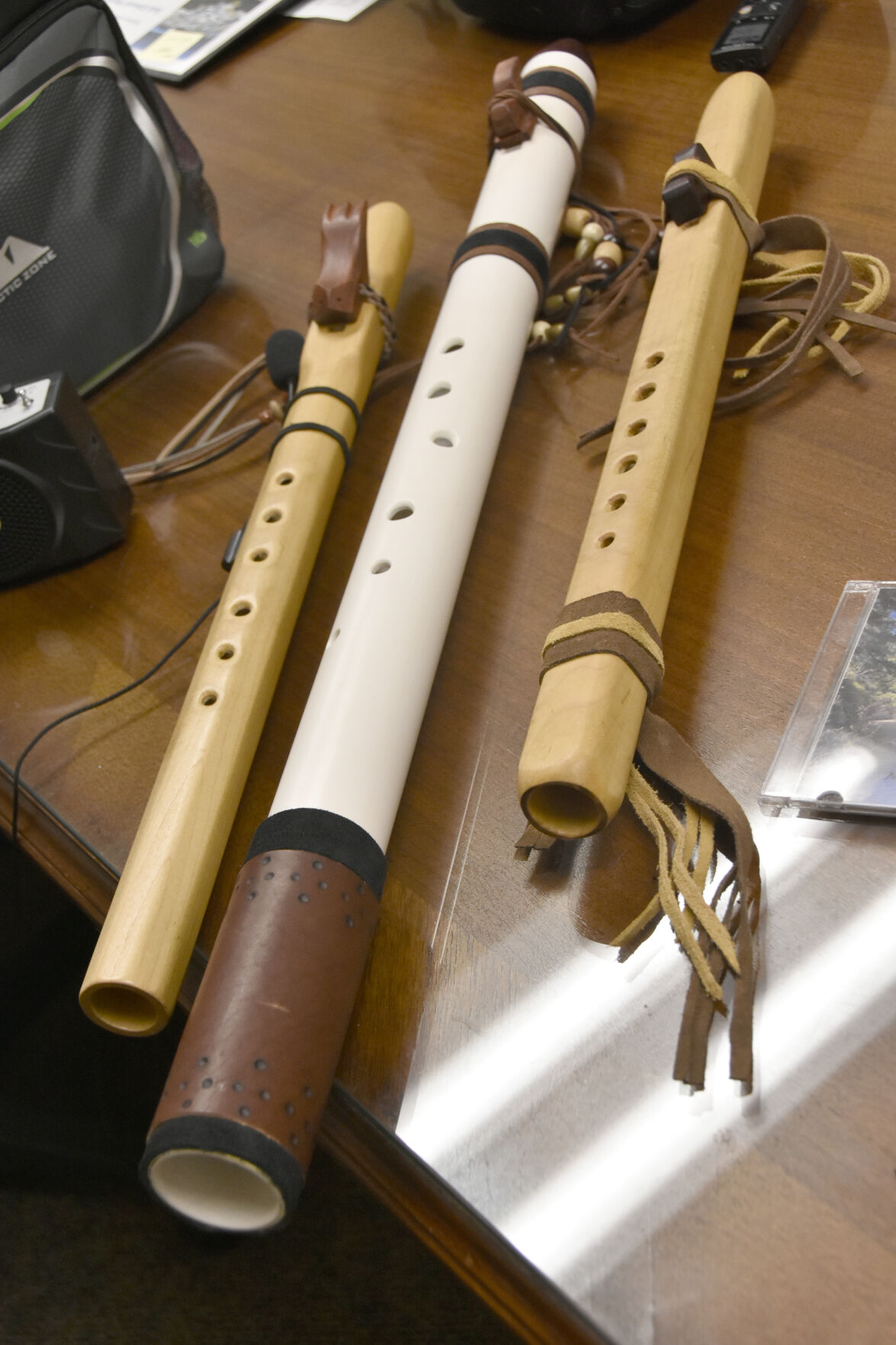 Three of the Native American flutes made by Kevin Ashley are pictured here. Ashley has been making his own flutes for more than a decade. Two of the flutes are made from maple, while Ashley made the bass flute in the center from PVC pipe.

Three of the Native American flutes made by Kevin Ashley are pictured here. Ashley has been making his own flutes for more than a decade. Two of the flutes are made from maple, while Ashley made the bass flute in the center from PVC pipe.

Kevin Ashley was once told that everyone has a song within them.

Ashley, an inside machinist in the Arnold Engineering Development Complex Model and Machine Shop at Arnold Air Force Base, found his not long after acquiring his first Native American flute. In the years since, he has not only continued to hone his playing but has added to his collection by meticulously crafting several of his own flutes.

“I’ve played guitars and banjos and different instruments, and that’s a lot of fun, but when I experienced the Native American flute, there’s something deeper inside that I connected to,” Ashley said. “With the sound that these instruments make, it kind of touches the soul, in a sense. Knowing that you can make one and, in the process of making one, when you begin to hear the sounds come from this wood, it comes alive. It’s not just a block of wood anymore.”

Through his interest in Native American culture due in large part to his Cherokee heritage, Ashley already had an affinity for Native American flute music. His interest led him to purchase his first flute during a visit to Cherokee, North Carolina, around 20 years ago. He said the shop owner took a few minutes to show him some playing techniques and share some advice.

“He said, ‘You can take that and learn to play all kinds of different songs that everybody knows about on the radio and whatnot, but learn to play your song,’” Ashley said. “He said, ‘Everybody’s got a song inside them,’ and he said, ‘This instrument is what that’s made for – to play the song that’s within you.’”

Ashley soon discovered the shop owner’s words were true, and he quickly fell in love with playing the Native American flute.

“You can take this instrument and go off into the woods or next to a creek, and you don’t have to know a set of notes or anything in particular like you would, say, on a guitar or whatever,” Ashley said. “It’s a very personal instrument, a very peaceful instrument to play. It’s very soothing.”

While Ashley does possess a musical background, he said this is not required to play the Native American flute. He said it’s all about playing what one feels on the inside.

“Somebody with no musical background can take one of these and, in a short period of time, fall in love with it and learn how to play it,” he said.

Although Ashley admits Native American flute music is “not everyone’s cup of tea,” he said those who find their ears grabbed by the tones soon find themselves loving it.

“To me, it touches something down in certain people that maybe they didn’t even know they had,” he said.

While learning to play was Ashley’s top priority after purchasing his first flute, it wasn’t long before he began taking a closer look at the instrument to learn how it produced its sounds. He did some research and took a stab at making a flute himself.

“And I was just kind of hooked on making my own,” Ashley said.

Ashley has now been making his own instruments for more than a decade. They can be constructed from a wide array of materials, including various woods, bamboo and even PVC pipes. Ashley uses power saws, drills, sanders and precision knives to make his flutes. He said the process requires a strong attention to detail.

“When you make a flute, most of it is pretty easy to do, but when you get to the holes, that’s the critical part,” Ashley said. “If you make a hole too small, you can always make it bigger. If you make it too big, you’ve messed up.”

“There is some science to it,” Ashley said, adding that with the proper setup, a flute can be made within a day or two.

Ashley has performed publicly with other musicians, for school groups and at several Native American festivals. He even produced an album of his own Native American flute music around 10 years ago.

Ashley carries a flute with him wherever he goes. He said he tries to get out in the wilderness as often as he can and is always prepared should he feel the call to play his song.

“I go into the mountains, I carry my flute and, sometimes, just sit under a bluff somewhere, build a fire and sit down and play my flute,” he said. “You talk about relaxing.”