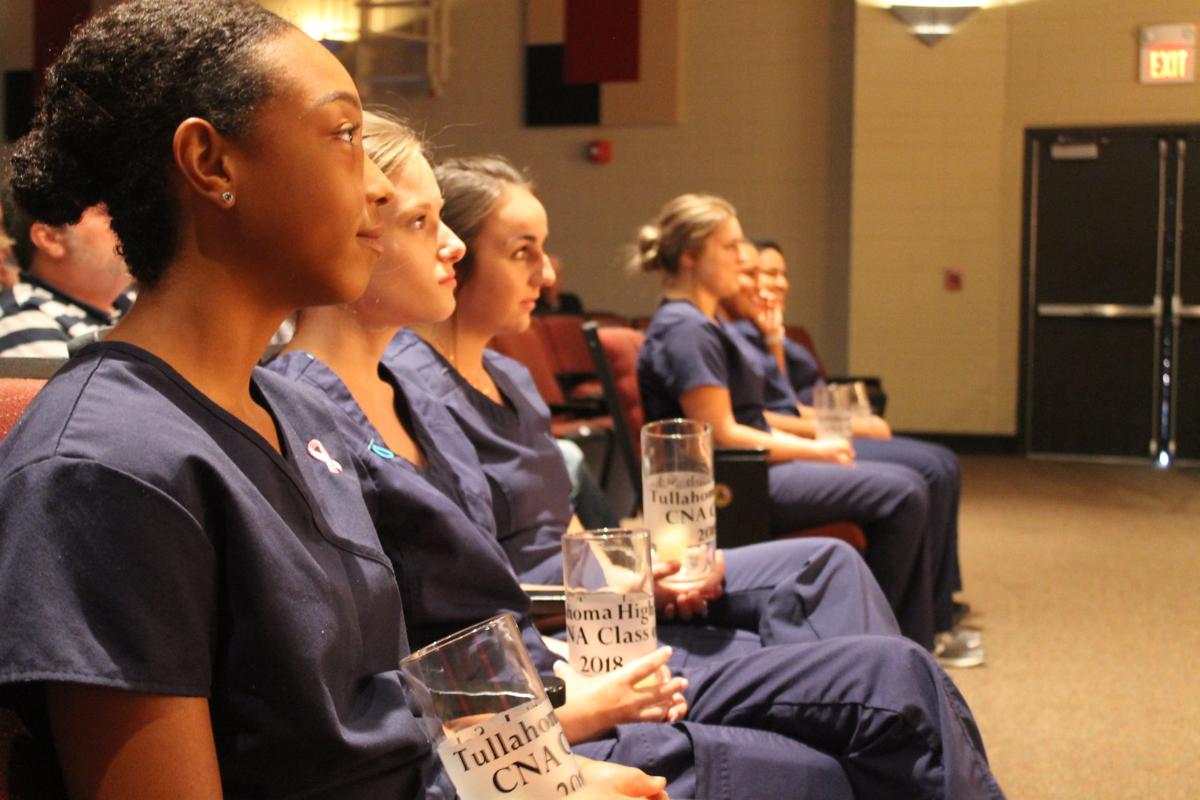 Promyse Bryson, left, sits with her classmates Thursday for their pinning ceremony to become certified nursing assistants (CNAs). Bryson and five of her 10 classmates were pinned during the ceremony for the inaugural CNA class at Tullahoma High School. 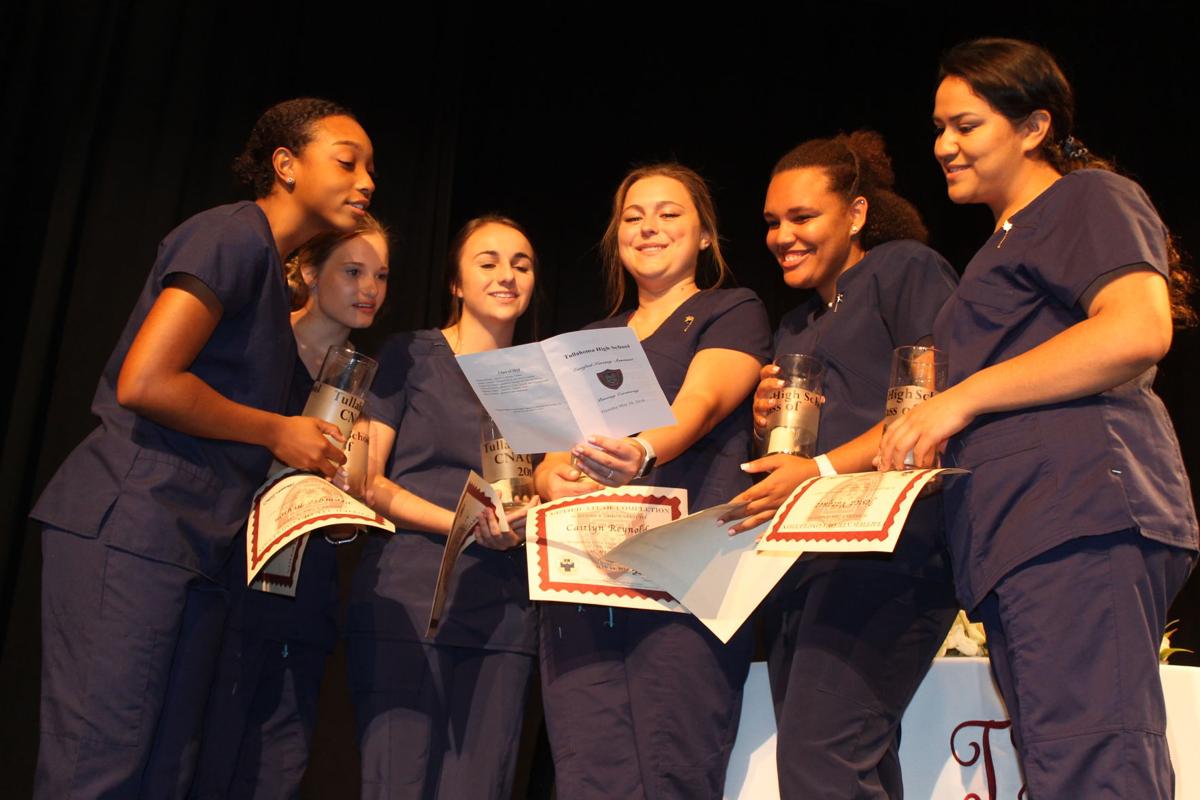 Promyse Bryson, left, sits with her classmates Thursday for their pinning ceremony to become certified nursing assistants (CNAs). Bryson and five of her 10 classmates were pinned during the ceremony for the inaugural CNA class at Tullahoma High School.

Promyse Bryson, left, sits with her classmates Thursday for their pinning ceremony to become certified nursing assistants (CNAs). Bryson and five of her 10 classmates were pinned during the ceremony for the inaugural CNA class at Tullahoma High School. – Staff Photos by Erin McCullough

Six THS seniors were pinned by their family members during the ceremony, marking the beginning of their professional nursing careers.

Nursing instructor Shannon Titus said she was immensely proud of her students and excited for them to start their career journeys from this point forward.

“They all want to pursue careers in health care,” she said. “This is just a stepping stone for them.”

The new class is part of the career technical education (CTE) program at the high school. There were 10 total students in the class this year, according to Titus.

Four students were not able to take part of the ceremony, she said, and all absences were due to certification testing issues.

Two students did not pass one portion of the exam and two more were unable to take the test due to identification issues, Titus said.

Despite the setbacks, she said, she fully expects all her students to be able to pass their certification exams in the coming weeks.

Taking the next step

According to Makenna Snipes, one of the graduates of the CNA program, the ceremony meant she and her classmates were finally done with the “long journey” of learning how to become CNAs.

“Honestly I’m just proud and happy that I passed (the CNA exam),” she said before the ceremony. “We can all go work and do what we want to do.”

Makenna said she plans to spend the summer working at Life Care Center of Tullahoma, where the students held their clinical rotations, and then move on to Pellissippi State Community College in the fall.

Makenna was grateful to her classmates for their help in making the time spent in class and in clinicals a better bonding experience.

“It was pretty difficult at times, but just having the classmates there made it a little easier,” she said.

Jessica McChesney was equally grateful and appreciative for the time spent with her classmates, as well as the invaluable instruction she received from Titus during the course of the class.

“I have so enjoyed this class and learning all the information it has offered,” she said during the night.

Jessica made a short speech during the ceremony detailing the various ways the program helped shape her as a future nurse, including learning how to trust and learn from her fellow classmates.

“We had to learn to trust one another in practicing skills on each other and to learn from one another for better ways to perform them,” she said. “My confidence has increased from being part of the program, and I cherish the relationships that I have gained.”

That confidence in her knowledge and ability, she said, will grow with her as she takes her next steps in the nursing program at the University of Tennessee in Knoxville and beyond.

Jessica gave special thanks to Titus as her mentor through the program.

Titus “pushed me and my classmates to learn how to study and set a high expectation us to achieve,” she said. “The way I work in a health care setting will always stem from the way that you taught me,” she said to Titus.

Another special thanks was given to her mentor at Life Care Center – a nurse she came to know as Rita – as well as all the other CNAs who worked with her class during their clinicals.

“I am grateful to have been given the chance to learn from other great CNAs in Life Care [Center],” she said. “They were excited about teaching us and trusted us with their own patients.”

Jessica concluded her speech by saying she was proud to be part of the first graduating class of CNAs at THS and thanked all those who made the program possible, including THS Principal Kathy Rose and CTE Director Travis Moore.

“And to the CNA class of 2018, you will always hold a special place in my heart,” she said.

While Titus is deeply proud of the 10 students she said goodbye to this semester, she is looking toward the future of the CNA program.

Her goal, she said, is to continue to garner more interest in the program and completely fill a class.

While 10 students took the course this year, she can have up to 15 each year.

“Hopefully I will have lots of members sign up next year,” she said.

Eventually she would like to see the class have enough interest to warrant a second CNA instructor, she said.

“If we get more of an interest in the class, the hope is to hire another instructor to help me,” she said.

The state has limits on CTE class sizes, she said, so if more than 15 students sign up, the school would need to hire another instructor.

For now, though, Titus was happy to see her students receive their pins and embark on their next steps in the health care profession.