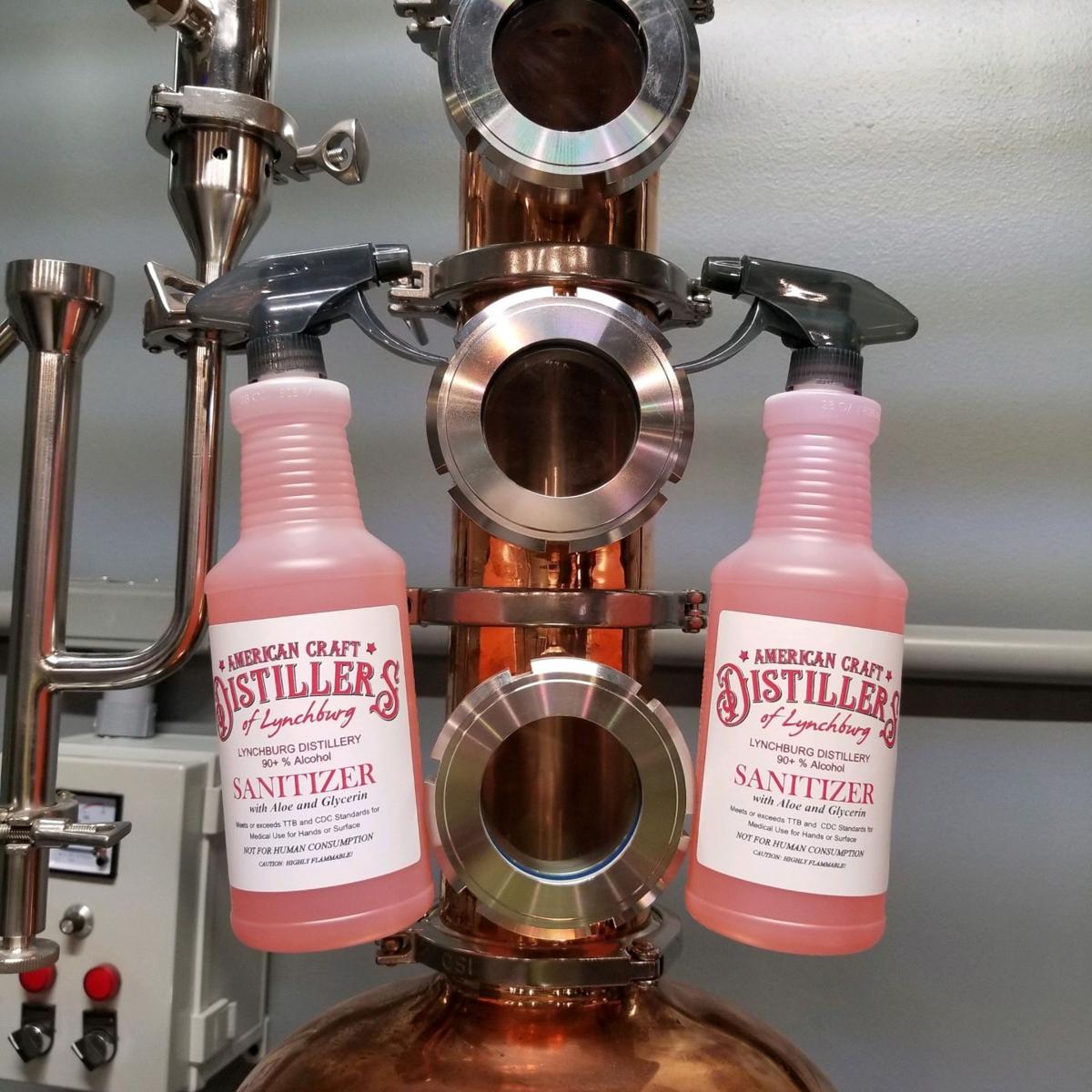 American Craft Distillery’s hand and surface sanitizer is sold for commercial use and donated to healthcare facilities, emergency responders and more. 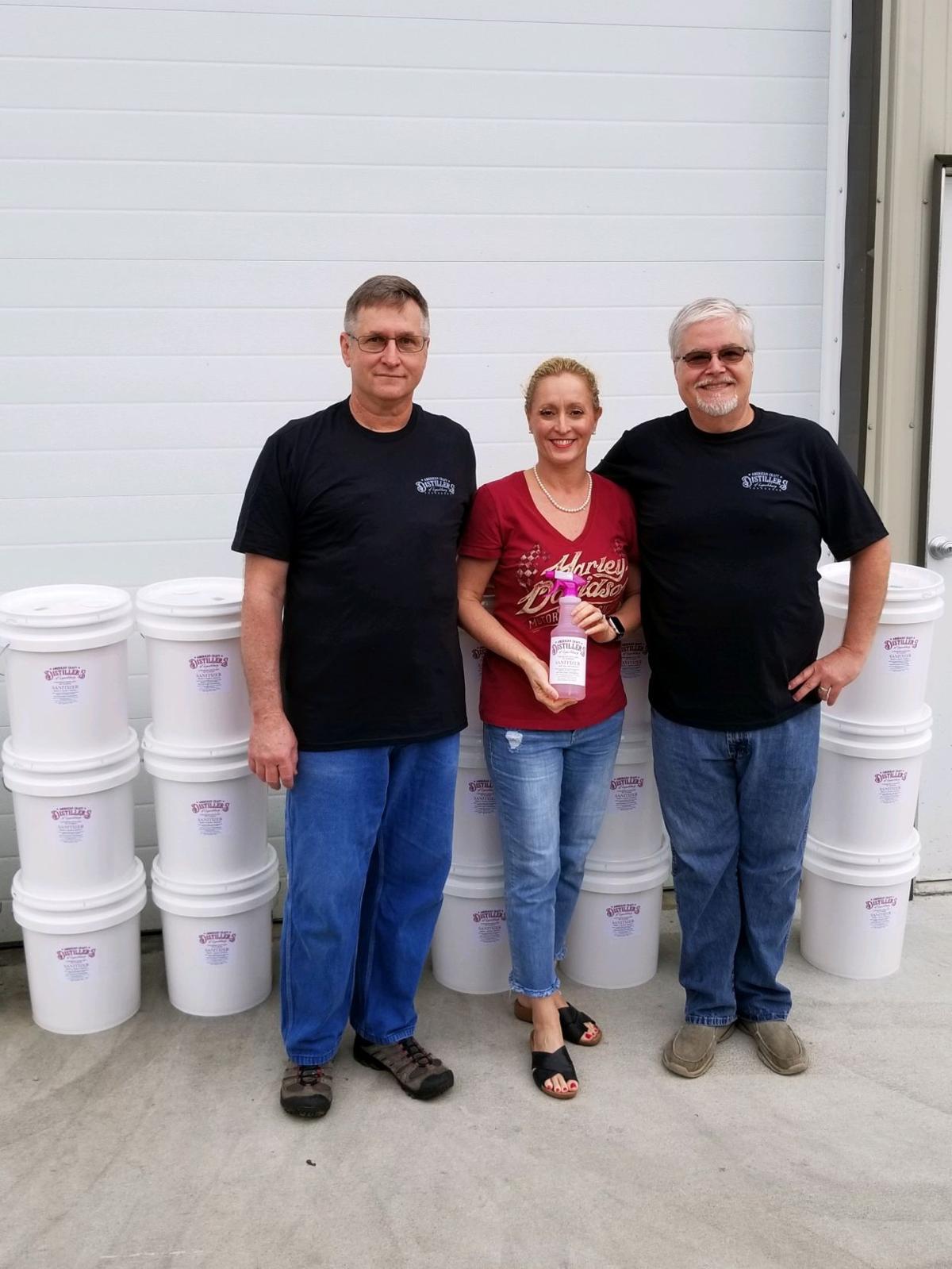 From left, Dr. Ray Tucker donates sanitizer to Sheila Johnson from USA Healthcare for the company’s use with his business partner John Manis.

John Manis and Dr. Ray Tucker are using their resources to help out in the middle of a global pandemic. Tucker-Manis Corporation opened the Lynchburg Winery in 2015 and the American Craft Distillery in 2018. Though they are a fairly new company, they had no trouble starting to help the community as soon as they heard that there was a need for hand and surface sanitizer that they could meet.

“I worked in healthcare on the information technology side and Ray works at the Winchester hospital,” Manis revealed. “We own the winery and the American Craft Distillery in Lynchburg. I knew that we had the ability to create alcohol. When we saw that there was a need for it, I said ‘we can make our own’.”

At the distillery, they distill the grain out at a high enough level to make their ethyl alcohol which is able to sanitize just like isopropyl alcohol.

“The process is very similar, so we thought we might as well use our distillery to help out because we started to see a shortage,” he said. “We initially started out making and giving away products and when the demand continued to grow, we decided to make a consumer version of it to sell in our distillery for commercial use in order to help out with the cost for operating the donated alcohol. It has been non-stop since.”

The team is on its third week of production now and they have continued to run out of alcohol. “We are very small compared to our neighbors at Jack Daniel’s. We are producing sanitizers as fast as we can. We add glycerin to it as well to give it a better hand feel and have had great success in doing this,” Manis said. “A lot of the small businesses in downtown Lynchburg are suffering because we are a tourist town and Jack Daniel’s closing the tours has really been hard on the town. Everything is pretty much closed except a couple of restaurants and the grocery store.”

The governor saw that the distillery was trying to fill the gap until supplies are replenished and deemed the distillery and winery an “essential” business so they can continue to stay open.

“We are having a good time doing it and we have had a lot support from our community because they see that we are trying to help out until the supply chain can catch back up so that healthcare facilities do not have to suffer,” he said. “We have donated to Arnold Air Force Base, Redstone Arsenal in Alabama and some of the major trucking companies here in Tennessee that are trying to protect their drivers.”

“This really is a community effort. The people who come and buy a sanitizer from us for their family are actually helping out healthcare workers, nonprofits, nursing homes, police and fire departments. I am excited to be able to do it.

“I never thought I would be in the hand sanitizer business but that is where we are right now,” he said. “We are trying to fill that gap and we have been really happy. We have seen Jack Daniel’s begin to do it as well as several other distilleries. Ethyl alcohol really is a sister product to isopropyl alcohol so it can do the same thing as far as sanitation goes.”

Lynchburg Winery and the American Craft Distillery are open to the public, according to Manis. “We are very cautious and only allowing no more than nine people in the building at any one time,” he said. “We are also complying with the social distancing guidelines. We also do curbside pickup if people are not comfortable coming in. Just call us.”

Lynchburg Winery and American Craft Distillery are both located at 34 Hiles St. in Lynchburg.