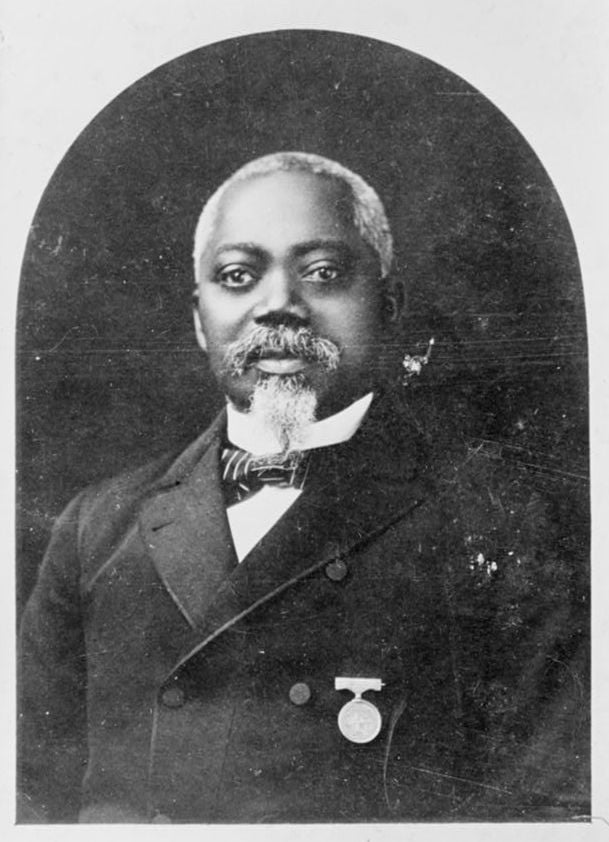 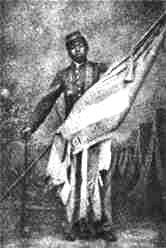 He was an ordinary man who loved God, his country, and his family.  In fact, he considered pursuing a career in the church and becoming a preacher.  He stated that, “I had a strong inclination to prepare myself for the ministry.” That dream was never realized, yet his devotion to all that he valued would become legendary.

William H. Carney was born on February 29, 1840, in Norfolk, Virginia. He went to live with his father in New Bedford, Massachusetts (known as the whaling capital of the world), where he became involved with academics and learned to read and write. He became a working on the waterfront and became a sailor on whaling ships.

When the war began, William was twenty-three years of age.  He prayed and pondered on what he should do. Being a deeply religious man, William was led to believe that the best way to serve God was by serving his country and conscious. He knew there would be obstacles and many.  Yet when duty called, he volunteered.

In March of 1863, he and his fellow men were allowed to join the army.  They were a distinct group of men, eager to prove themselves on the field of battle.  That opportunity would come less than four short months.  William was assigned to Company C, 54th Massachusetts, under the command of Colonel Shaw.  His leadership skills were soon noted and he was promoted to sergeant.

At first, he, along with approximately fifty of his fellow citizens who volunteered with him, were called names, made fun of, and downgraded by other soldiers wearing the same uniform.  Yet he stood beside the other volunteers and followed freedom’s call. History would later their bravery and love of country.

Training was intense but rushed, lasting only two months while at Fort Meigs.  Soon they received order to go to Charleston, South Carolina.  Though never having seen the elephant (first fight), nevertheless, the men were eager to prove themselves. That date with destiny came on July 18, 1863.  The place was known as Fort Wagner.

The fort controlled entry into the southern portion of Charleston Harbor.  Brigadier General William Taliaferro was in command of the formidable barricade.  The beach was only sixty yards wide, with the ocean on the east and marsh on the west.  The fort walls seemed impenetrable, rising thirty feet into the sky.  Guarding the fort were fourteen artillery pieces.

The battle began with the Navy launching a blistering attack to soften up the fortification.  Though lasting for eight hours, the assault proved to be ineffective.  General Gillmore ordered an attack at 7:45 p. m., hoping that the dusk would afford the men under his command some cover from those men positioned on the parapets. Unfortunately, it did not.

The attack was in three waves.  Colonel Shaw approached on the double quick via the west, while General Strong and Colonel Putnam attacked from the southside.  When Colonel Shaw’s men were within one hundred fifty yards or so, a deadly bombardment began.  The direct fire was devastating but nevertheless the men charged forward.  Captain Luis F. Emilio, stated in his report that, “At that moment, Wagner became a mound of fire, from which poured a stream of shot and shell … before which men fell in numbers on every side.” The 54th’s response, Emilio recalled proudly, “Was to change step to the double-quick, that it might the sooner close with the foe. There had been no stop, pause, or check at any period of the advance, nor was there now. As the swifter pace was taken, and officers sprang to the fore with waving swords barely seen in the darkness, the men closed the gaps, and with set jaws, panting breath, and bowed heads, charged on.”

As the men reached the parapet, they were met with fierce resistance.  Colonel Shaw fell along with several of his men.  When the color guard fell, Sergeant Carney, without regard for his own safety, through down his gun and grabbed ‘Old Glory’. Sergeant later recalled that he, “Threw away my gun, and seized the colors, making my way to the head of the column.” He made it to the top of the fort and began waving the flag.  “I found myself alone … while the dead and wounded were all around me, lying one upon another. I could not go into the fort alone,’ and so I halted and knelt down, holding the flag in my hand. While there, the muskets, bullets and grape-shot were flying all around me, and as they struck, the sand would fly in my face.”

Despite the severe wounds, he guarded the symbol of America with is life and kept it flying high throughout the battle.  Even when he returned to his fellow soldier, he refused to give to anyone other than a fellow 54th.   Upon relinquishing his duty, he proudly said, “Boys, I only did my duty; the old flag never touched the ground.”

The casualties were staggering, with approximately 1.515 soldiers wounded, killed, or captured.  Of the six hundred men from the 54th, 256 were either killed, wounded, taken prisoner, and/or not accounted for.  In June of 1864, due to his wounds, William Carney was discharged on a disability that persisted throughout his life.  He became a postal service worker. On May 23, 1900, William Harvey Carney was awarded the Medal of Honor for gallantry.  He is considered to be the first black man to receive the prestige award.  He was given a position at the Massachusetts Statehouse as a messenger.  Upon his death on December 8, 1908, all flags in Massachusetts were flown at half-mast.  This tribute had never been given to a civilian.

There is a lesson for us in the heroic nature of William Carney’s action under fire. Though he had been a slave, he loved his country.  He loved the flag that represented freedom and his country. He loved it so that, although severely wounded multiple times, he would not let the

flag leave his hands or touch the ground.  He stood tall holding Old Glory.  He waved it defiantly and was perfectly willing to offer his own life for what he believed.  He realized that the flag represented the high cost of freedom, for freedom is never free.  It is paid in the blood of those willing to give of themselves so we can enjoy the sweet taste of liberty.  When we disrespect the flag, we disrespect all those men and women who so gallantly fought, were wounded, captured, bled, and/or died for our independence.  For William realized the flag did not represent race, it did not represent gender, and it did not represent hatred.  He confirmed through his heroic deeds that the flag represented love of country, for all mankind, for all womankind, for the down trodden, the wretched refuge, for the homeless, and for the huddled masses yearning to be free.  Long may she wave and as Americans, forever let us stand in her presence.