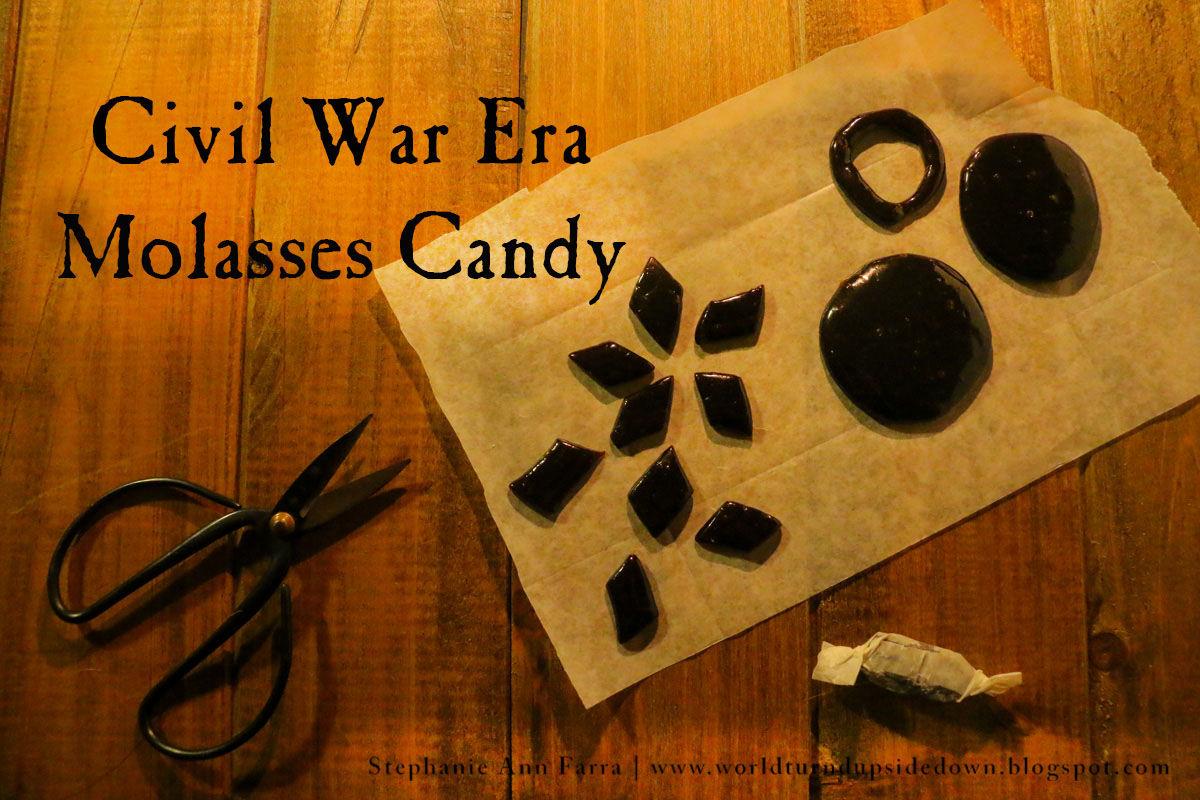 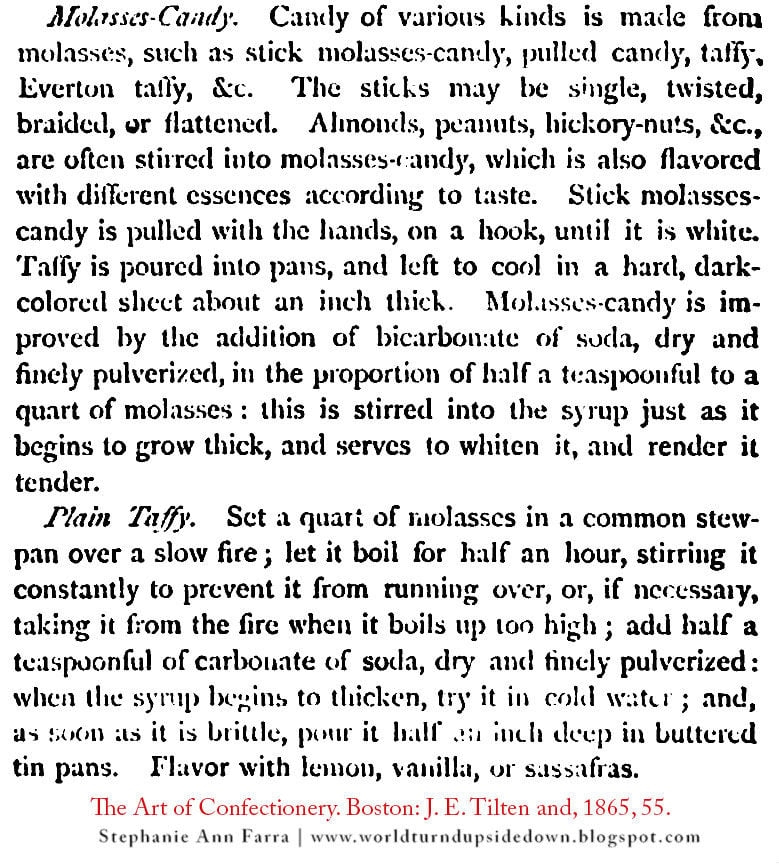 The liquid was poured into buttered pans to cool and once there, the party began. Each member of the group would cover their hands in butter and begin to pull on a ball of candy. Pulling and folding, the group joked and gossiped until their balls of candy grew lighter in color. It was now time to form it into its final shape. It could be rolled into ropes and cut with scissors or twisted or braided, or molded into any number of shapes, but many young women preferred to make chain necklaces out of it. Seating around a warm fire with friends and the gingerbread like smell of molasses cooking wafting in the air, a candy pull was a nice break from an otherwise bleak and monotonous winter.

Making candy was mentioned frequently in Sarah Morgan’s wartime diary and many letters of the time. In aletter from a Virginian in January 1861, Angus wrote to Kate of his holidays: “Was at a Taffy pulling; had a fine time eating hard Molasses with unwashen hands. Did you ever pull any, when you had to spit on your hands to keep it from adhering to them?” Another Virginian, Mollie Houser, wrote to her cousin James “I Just wish you Could have been here we had a taffy stewing one nite they was a Couple of our soldiers home & some of the neighbours Came in & we had a fine time boililing molasses &…taffy.”

The majority of recipes from this time period include only molasses, flavoring and bicarbonate of soda, known now as baking soda as the main ingredients and some recipes suggested that peanuts or blanched almonds might be added. However, The Cook’s Own Book (1854) includes the addition of brown sugar and lemon juice which is more similar to recipes today. The recipe did not vary much and was a favorite in shops for those who did not want to make it themselves. A writer for the Southern Literary Messenger (1863) remembered going North for school and couldn’t remember much about the food there except to say:

I recollect, though, that the boys had a great passion for molasses candy, which was prepared in the Philadelphia shops—not in little pig-tail twists with a knot at the end and wrapped up in white paper, as the fashion used to be in Lynchburg thirty years ago-but in broad cakes, which the boys used to call by the atrocious name of “belly-wax.

This recipe was cooked for the Historical Food Fortnightly. A yearly challenge that encourages bloggers to cook a historical food every two weeks.

The Challenge: Culinary Vices (January 15 – January 28) Some foods are really, really naughty. Globs of butter, lashings of sugar and syrup, decadent chocolate and wine. Bring out your naughty, indecorous side with foods associated with all the bad things, in the best ways.

How Did You Make It:

Before you start, butter a large square casserole dish. Pour molasses in a large saucepan (much bigger than you think you need as it will boil up) on medium-high heat. Boil, stirring constantly until you reach the soft ball stage (240° F) add baking soda and stir until the mixture reaches the hardball stage (250° F). At this point, remove from heat and add the flavoring. Stir in the peanuts or blanched almonds if desired. Pour mixture into the buttered dish to cool. Leave in the dish until it is cool to the touch (5-10 minutes.) Enlist helpers. Once cooled, the candy should move in one globular mass. Divide the mass up and have everyone pull at a piece, fold it over and repeat until the candy turns a lighter brown. Form into ropes and cut small pieces with scissors. Wrap in pieces of wax paper or oiled paper.

Time to Complete: About 30-45 minutes

How Successful Was It?: Very. It has a light, sweet molasses flavor. It photographed dark but is actually an amber color in bright sunlight.

How Accurate Is It?: I used baking soda as in the first recipe instead of carbonate of soda which is today sold as washing soda.

Do you plan on attending the Coffee County Fair this week?