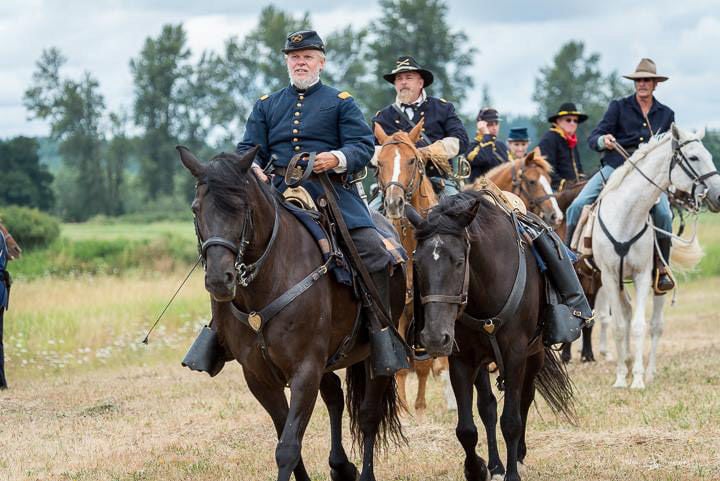 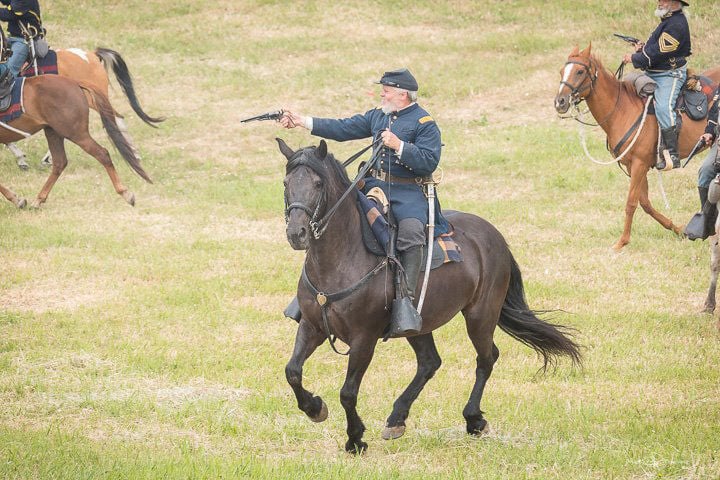 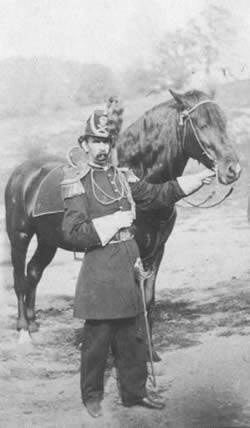 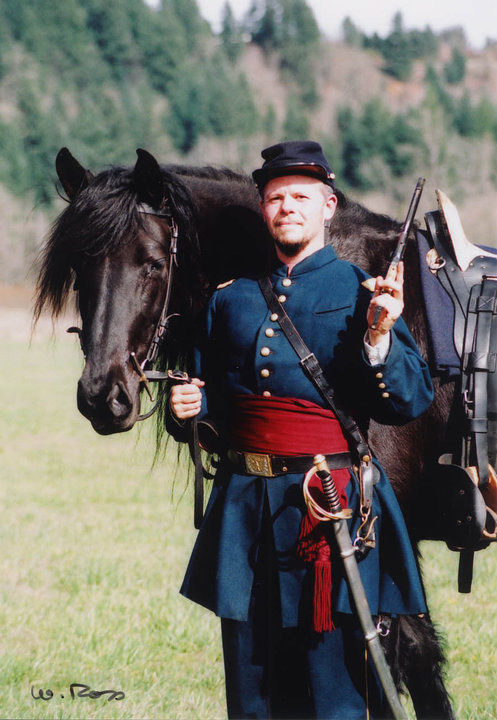 Ken Morris, a resident of Eagle Creek, Oregon, and conservation planner with the U.S. Fish and Wildlife Service, has been involved with horses for some twenty six years. Whether it’s leading a Civil War reenactment cavalry unit into battle, practicing half pass in a sand arena, participating in mounted police training, or just chatting about horses and horsemanship, Ken Morris’s passion for horses, particularly the Canadian Horse, is contagious. This passion, when combined with his seemingly insatiable thirst for knowledge about horses and their role in history, in part explains why Morris is such a wonderful advocate for the Canadian Horse, a now endangered breed that has played a pivotal, yet largely unrecognized role, in American history. As one of the few North American horse breeds, the Canadian Horse is descended from horses sent over to what is now Canada by King Louis XIV of France in the seventeenth century. From these original horses only the strongest survived the long winters, scarcity of food and harsh conditions, resulting in a breed of horse renowned for its hardiness, soundness and strength. These horses, the Canadian Horses as they would come to be known, ultimately became one of the most desirable all-around horses for work and transportation back in a time when a person’s livelihood, and indeed survival, frequently depended on the hardiness and soundness of his horse.

Morris’s introduction to the Canadian horse almost twenty years ago was fortuitous, when, while wandering through an antique shop, he happened to pick up a manual on horses published in 1859. As he flipped through the pages, his attention was drawn to a section describing a breed of horse that, according to the author, was “remarkable for the great volumes of the manes and tails” and its “immunity from disease of the legs and feet even under the most unfavorable circumstances.” The passage in the antique book went on to describe the usefulness of this breed as a working horse, its strength and stamina, and its ability to pass on its attributes when crossed with other breeds. The breed described by Henry William Herbert in this horse manual, Hints to Horse-Keepers – A Complete Manual for Horsemen, was the Canadian Horse.

Morris explains that this passage in the old horse manual jumped out at him because at that time he happened to be looking for a horse similar to his old style aging Morgan gelding. Unfortunately, finding a horse with that elusive combination of hardiness, soundness, strength, and boldness, was proving to be a challenge, as other attributes are now emphasized in horse breeding. It is not, after all, your average horse of today that will keep its wits about it despite battlefield chaos, and that will trust its person enough to go willingly into the very scary situations that can be encountered on a battlefield. What Morris did not know when he happened upon the antique horse manual but what he would later discover, is that the Canadian Horse’s hardiness and physical and mental toughness had, in fact, made it a sought after cavalry horse during the Civil War, when rations for soldiers were meager, and provisions for horses sparse or nonexistent. A soldier’s fate would frequently be dependent on the survival of his horse, so hardiness and soundness were valued above all else. To underscore this point, Morris quotes from memory a passage written by Benjamin Crowninshield, who was a captain in the First Massachusetts Cavalry during the Civil War. As explained by Captain Crowninshield, the Canadian Horse can “endure hardship and hunger nearly in proportion to their Canadian blood,” surviving by eating the bark of trees, leaves, almost anything; and would survive where horses of any other breed would starve.

Morris’s first thought in the antique shop upon reading the passage about the Canadian Horse, was that the description of the breed sounded like what he had been looking for in a horse. His second thought was that, being pretty knowledgeable about horses, he surely would have heard of such a horse if the breed was still in existence. Much to Morris’s delight and surprise, a little research proved that the Canadian horse was not extinct, but quite rare outside of eastern Canada. At that time there were a handful of active breeders and proponents of the breed in western Canada. Morris quickly reached out to one of them, and he and two friends drove to Alberta, where they purchased two Canadian Horses on the spot.

As luck would have it, the horse Morris purchased, Jeff, proved to be everything that Morris had hoped for, and more. Bold, brave, and willing, even at a young age. Morris fondly recalls riding the three-year-old with the Northwest Cavalry Association in the Portland Grand Floral Parade, only a few months after the horse arrived in Oregon from Canada. This major parade, with an audience of 400,000 lining the streets, wound through four miles of downtown streets, including the high Burnside Bridge that crosses the Willamette River. That bridge proved too much for another older, more experienced horse in the group. He “blew up,” bucking and cow-kicking, clearly wanting nothing more than to “get out of Dodge.”

As his skilled rider struggled to maintain control, the Canadian horses came to the rescue. With Morris riding Jeff, and an experienced dressage trainer on a four year old Canadian Horse who had been brought down to Oregon as a sale prospect, the two young, inexperienced Canadians boxed in the troubled horse, and escorted him over the bridge and through downtown Portland to safety. This impromptu demonstration was enough to result in the immediate sale of the four year old Canadian Horse to the dressage trainer’s client, who needed a steady mount to increase her confidence.

As for Jeff, he went on to become Morris’s trusted mount for many years, serving in both Cavalry and Artillery, where he pulled cannons in battle. He now belongs to one of Morris’s best friends (a horse like Jeff had to stay in the family) and is enjoying a second career in cowboy dressage and Working Equitation. And yes, he still marches in the Grand Floral Parade! Ken has gone on to train other Canadian Horses for the battlefield, including his two mares, Heritage and Westrey, and promote the breed as a Director and Western U.S. Liaison for the Canadian Horse Heritage and Preservation Society.

The Canadian Horse still possesses those attributes that have allowed it to survive for centuries despite adversity. As Morris’s experience with his Canadian Horse underscores, these attributes prove equally worthy and important today. But as pointed out by Morris, there is more to the allure of the Canadian horse than that. These horses are extremely people oriented, “but not pushovers. They needed to be mentally as well as physically tough to survive. But if they accept you as their leader, they will do anything for you,” Morris says. And they are versatile – they can do it all from dressage, to driving, to galloping a cross-country course. “If you are the type of person who wants a horse for a lifetime, who enjoys a close friendship with a horse, if you are the type who thrives on variety and likes doing anything and everything with your horse, the Canadian is a great choice,” explains Morris. The Canadian Horse found a wonderful advocate in Morris.

If you want to learn more about the Canadian Horse, meet breeders and owners, and see their beauty and versatility in action, attend the Canadian Horse Expo, October 13, 2018 at the Harwinton Fairground in Harwinton, CT. For more information, visit www.facebook.com/candianhorseexpo, call 978-468-6246 or email threefoldfarm@comcast.net.