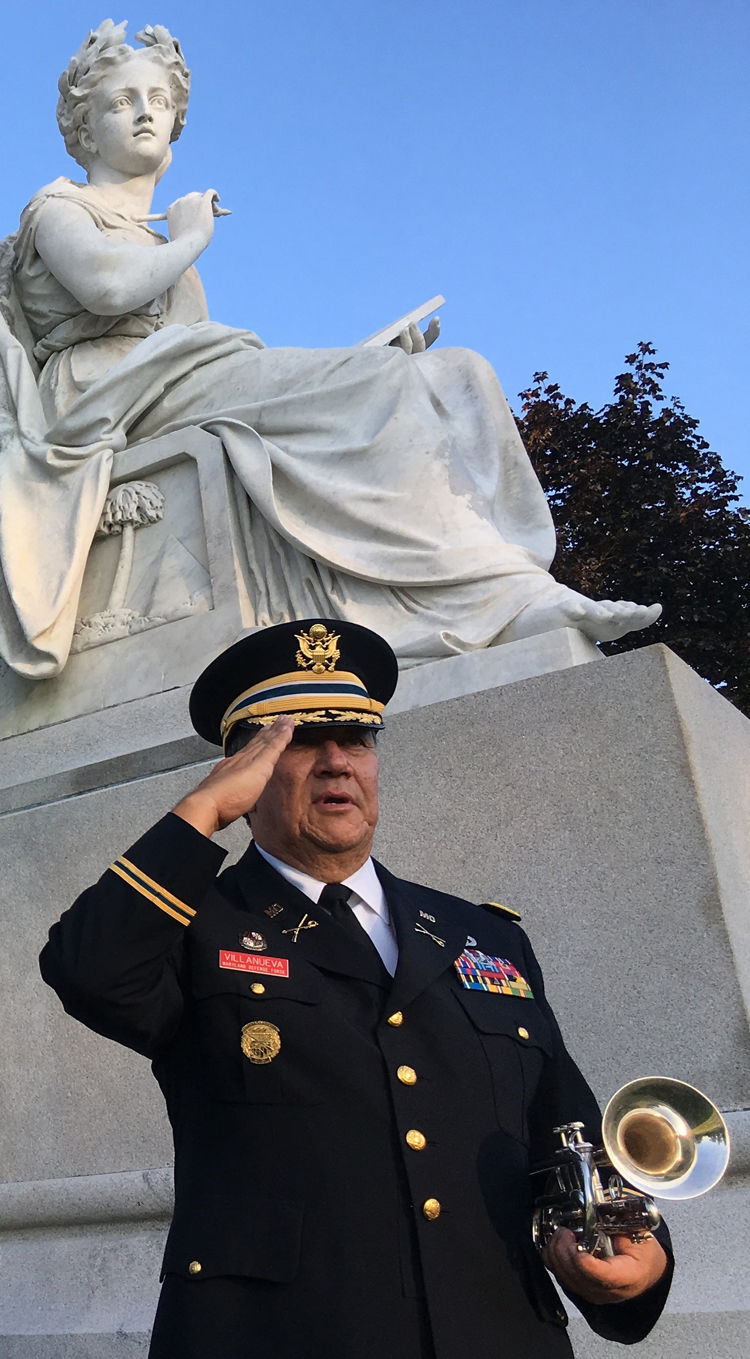 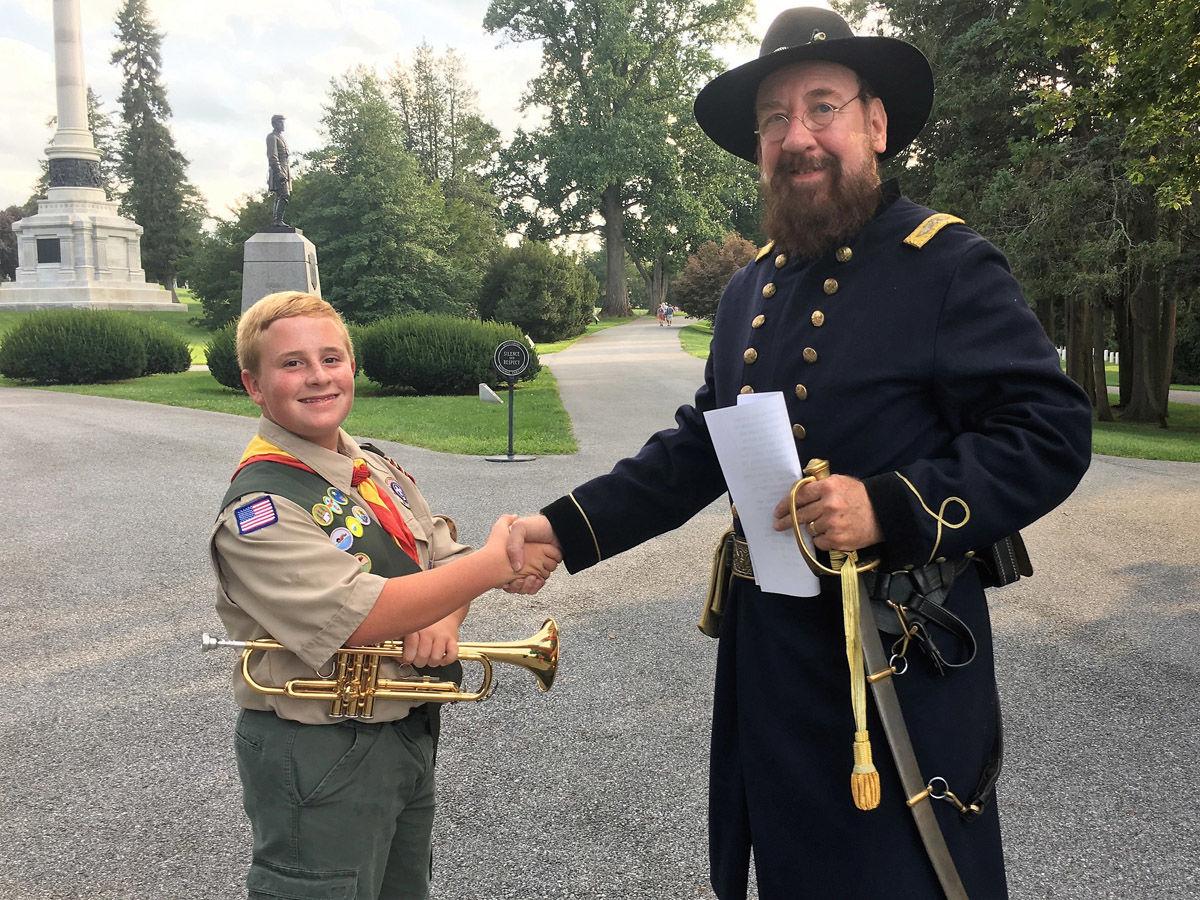 A labor of love that started sixteen summers ago came to fruition this year at the Gettysburg National Cemetery. It was called “One Hundred Nights of Taps,” and was held each evening at 7:00 p.m. from Memorial Day through Labor Day at the Soldiers’ National Monument.

The inspiration came about when Wendy Allen attended a ceremony in Ypres, Belgium in 2001 while traveling there on a tour of World War One sites. She said that community’s daily “Last Post Ceremony” was a simple, but moving tribute to the courage and self-sacrifice of those who fell in defense of their town.”

As the ceremony concluded, Allen thought how well a nightly program like that would fit in Gettysburg. She said that she “attempted to make it happen over a course of sixteen years off and on without any effective results.” That is until the summer of 2016. That’s when she proposed the idea to the Lincoln Fellowship of Pennsylvania, of which she now serves as Vice President. The Fellowship Board voted to support the program, and joined in a partnership with Taps for Veterans and the National Park Service at Gettysburg.

Allen, a renowned Lincoln artist and owner of the Lincoln in Art Studio in Gettysburg, said the idea really got rolling when Jari Villanueva came on board to help her organize the event and line up the trumpeters for the hundred nights. Villanueva recently retired from the United States Air Force where he had spent twenty-three years in the USAF Band in Washington, D.C., and participated in well over five-thousand ceremonies at Arlington National Cemetery. In 2007, Villanueva was inducted into the Buglers Hall of Fame, the first active duty military bugler to receive that honor. Allen and Villanueva praised the Park Service for their assistance in making the summer a success. Allen said, “They were terrific. Katie Lawhon was particularly supportive, especially in getting the word out for us.”

The trumpeters ranged in age from eleven to eighty-two. They represented each branch of service, as well as Boy Scouts, police and fire Departments, high schools, colleges, reenactment and living history groups, even the Library of Congress. The event featured one trumpeter per night, but on special occasions such as Holidays and the Anniversary of D-Day, a duo or group of trumpeters performed. Thirteen buglers attended on June 10th as a Brass Band Festival was being held in town. Twenty buglers performed at the closing ceremony on Labor Day with an entire program of songs in addition to “Taps.”

Allen attended ninety-nine of the one hundred nights and officiated at more than ninety of them. The only one she missed was for a board meeting of the Lincoln Association. Allen said, “The bottom line for me is that I deeply love this country. And the ceremony was a way for me to give thanks. Honestly, I got chills every night I was there. The Gettysburg National Cemetery is a very special place. The “Taps” ceremony wasn’t presented to draw an audience, but as a commitment ceremony to be done with or without attendees to honor American veterans, the crowds far exceeded our expectations. And amazingly not one of the nights was a rain out. We did have some rain one evening, but no thunderstorms that would cause us to cancel.”

The initial crowds were around twenty-five to thirty people per night through early June, but as the word spread, the average attendance was over a hundred for each ceremony. Between two hundred and three hundred attended on the final night.

Local residents and out of town visitors alike spoke of the pure emotion that the “Taps” program brought out. Allen said that she loved seeing Suzie and Jeff Cheeks of Gettysburg there most every night. Suzie said, “We heard about the “100 Nights of Taps” just before leaving for a military stone dedication in Illinois over Memorial Day weekend. The evening we returned, after a twelve-hour trip, we attended our first one. We were hooked. Then, Jeff and I were thrilled to make attending the program a part of our daily routine. We also brought visitors from out of town with us including our daughter who is in the Navy. I think it’s important as an American to support our troops and honor ALL veterans. “Taps” was a beautiful way to do that, and we thank Wendy Allen and the Lincoln Fellowship for their support of our American heroes.”

Betty Woods of Savannah, Georgia said “…it was very moving and made me stop and think of all the men and women who have heard the song in the past honoring veterans of so many wars and conflicts.”

Master Sergeant Tammy Harkleroad, stationed at Fort Belvoir attended two of the evenings. She said, “I felt humility, I felt gratefulness, I felt empathy for family members, I felt emotional for those who have gone before me who paid the ultimate sacrifice. As the Gettysburg address reminds us, “It is the living, those remaining… their duty to remember and honor the fallen. The “Taps” ceremony helps us do that.” During her 26 years of service, Harkleroad has participated in Operation Iraqi Freedom, Operation Enduring Freedom and has been stationed in Germany and numerous stateside assignments.

Occasionally, a guest was asked to join in officiating or reading at the event. I was honored to be among those. The two nights that I read the Gettysburg Address were extremely touching for me. While delivering Lincoln’s iconic speech, I gazed out across the cemetery where so many American heroes lay in their final resting place, and I could almost feel those words about government “ of the people, by the people and for the people.” And when “Taps” echoed across the cemetery each night that Rhea and I attended, it was a patriotic feeling beyond words. Veterans, who were always honored at the event, were especially moved. One gentleman in particular stands out. He was a World War II vet in a wheel chair. You could truly tell that the sound of “Taps” touched him more than a volume of words Eva Payne, age seven, also participated one evening, by reciting a portion of the Gettysburg Address. Dr. Allen Guelzo, author and Henry R. Luce Professor of the Civil War Era at Gettysburg College composed a two hundred seventy-two word recitation for the ceremony. The Lincoln Fellowship’s President, Reverend Stephen R. Herr of Gettysburg spoke and emceed the final evening’s event.

In addition to the “100 Nights of Taps” is which is set to continue each year, the Lincoln Fellowship of Pennsylvania will commemorate Lincoln’s Gettysburg Address on November 19th this year as they have annually since 1938. A special ceremony and rededication program takes place at the National Cemetery, and is usually televised worldwide. The November event is now co-sponsored by the Gettysburg National Military Park, the Gettysburg Foundation and Gettysburg College.

Do you plan on attending the Coffee County Fair this week?