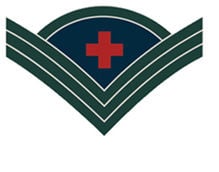 By September, 1780, Hospital Stewards were given the added responsibility to purchase whatever was necessary for use in the care of the sick and wounded. Their role in the hospital was rapidly expanding and they were expected to handle major administrative and logistical functions in the hospital. At the end of the war, Congress reduced the size of the army. From 1784 to 1789, there was no organized Medical Department.

While the Hospital Steward had no official rank in the army and were soldiers detailed from the line, they played a key role in providing healthcare for the soldiers. They had to be able to read and write and have some background in mathematics, chemistry or pharmacy. Few soldiers of this era had these abilities.

There was not even any special pay for the position. It was not until 1838 that the US Congress authorized the enlistment of men as stewards. These men were usually privates but drew an additional 15 cents extra per day because of their special duties. These were the first men enlisted for the US Medical department in the 1800’s. Some of these men who were appointed were druggists or had some medical training although most had no special skills in the medical arts. Many of them were appointed from the ranks, but showed some promise to someone to be appointed. Many came from the bands affiliated with the units as they were used as stretcher bearers during battles.

In 1813, the reorganization of the Army began and had a major impact on the Army. The pay and allowances for a steward was twenty dollars and the wardmaster received sixteen dollars and both received two daily rations. Congress did not extend the authorization for stewards. In order to meet the needs of providing qualified individuals to fill the duties of a Hospital Steward, the Secretary of War authorized the enlistment of individuals for a limited period but without authorization from Congress. Hospital Stewards were taken from the line and the preference was an NCO. Stewards were required to attend three drills a week with the rest of the soldiers. This severely impacted on the care of patients and the regulations were changed to make the steward attend only the weekly inspection and payroll muster. Hospital Stewards were learning patient care by “on the job training” and were often left behind to care for the sick when the surgeon accompanied the troops to the field.

Hospital Stewards were dedicated and often placed in situations that challenged their knowledge in keeping records, dispensing of medicine and caring for the sick. John Bemrose, who served as a steward wrote in his memoirs describing his duties during the Second Seminole Indian War in 1835. He included the cases of wounded that he treated and his written case histories were as detailed as any surgeon of that period.

During the War with Mexico, the Hospital Steward accompanied the surgeon into battle, dressing wounds and dispensing medicine. The army staff recognized the importance of the Hospital Steward but still no action was taken by Congress to authorize the enlistment of men for the sole purpose of serving in this capacity.

In 1847, the Surgeon General had asked Congress several times to authorize positions for Hospital Stewards and he would set up a formal school to train them, however, his requests were turned down.

In the fall of 1851, General Order #53 was published which described chevrons for Hospital Stewards. While the Hospital Steward of that time enlisted as a private, the regulations put him at the pay and responsibility of a sergeant. An addendum to the Regulations for the Uniform and Dress of the U.S. Army that authorized a “Half Chevron” consisting of a green background with yellow trim and a Caduceus to denote the rank of the Hospital Steward.

At this time, both British and French uniform designs influenced the military uniforms of the US. At this time the French had more influence so the new chevron designed for the Hospital Steward was similar to the French army’s upper arm oblique chevron for quartermasters. The design had a two-inch yellow caduceus on a half chevron of emerald green cloth with ½ inch green edges, separated from the rest of the chevron by a ½ inch yellow stripe. Green was used since the surgeon wore a green sash to indicate his status and his position in the army. This general design continued unchanged until 1887.

Finally in 1856, Congress authorized the Secretary of War to appoint as many Hospital Stewards as needed in the army and mustered onto the hospital rolls as “NCO’s”. This action permanently attached the stewards to the Medical Department. It also required that the war department appoint any army Hospital Stewards and assign them to posts, not specific units. This denied the appointment of stewards by regimental commanders.

The Hospital Steward was responsible for assisting the surgeon in minor surgical procedures, dispensing medicine and supervising the attendants and other civilians who worked in the hospitals. They were charged with procuring vegetables, meat, and bread from the local area when the normal supply system was interrupted. Some stewards worked in the government laboratory supervising the production of medicine.

Dental care for the army consisted primarily of extraction of teeth and was done by the surgeon or his Hospital Steward. The first dentist in the army was a medical NCO assigned to care for the dental needs of the students at West Point.

In April, 1862, a bill was passed by Congress to meet the pressing needs of the Medical Department. This gave the regular army an addition of ten surgeons, ten assistants, twenty medical cadets and as many Hospital Stewards as the surgeon-general might deem necessary; and it provided for a temporary increase in the rank of those officers who were holding positions of great responsibility. It gave the surgeon-general the rank, pay and emoluments of a brigadier-general; it provided for an assistant surgeon-general and a medical inspector-general of hospitals, each with the rank, etc., of a colonel of cavalry, and for eight medical inspectors with the rank of lieutenant-colonel. These original vacancies were filled by the President by selection from the army medical officers and the brigade surgeons of the volunteer forces, having regard to qualifications only instead of to seniority or previous rank.

During the Civil War, Hospital Stewards of volunteer regiments, however, were known to wear a variety of different uniforms and insignia. Confederate Hospital Stewards’ uniforms and insignia were not officially regulated, but one surgeon recalled that on the uniform many wore, the chevrons on the coat sleeves and the stripe down the trousers were very similar to those worn by an orderly or first sergeant, but were black in color.

In 1885, the Surgeon General’s annual report contained a recommendation that a “Hospital Corps” be formed of personnel trained in all aspects of medical support for field and garrison operations.