Free access for current print subscribers
Get Started
You are the owner of this article.
Edit Article Add New Article
You have permission to edit this article.
Edit
Home
News
Sports
Living
Special Sections
Classifieds
Obituaries
Coronavirus News
1 of 4 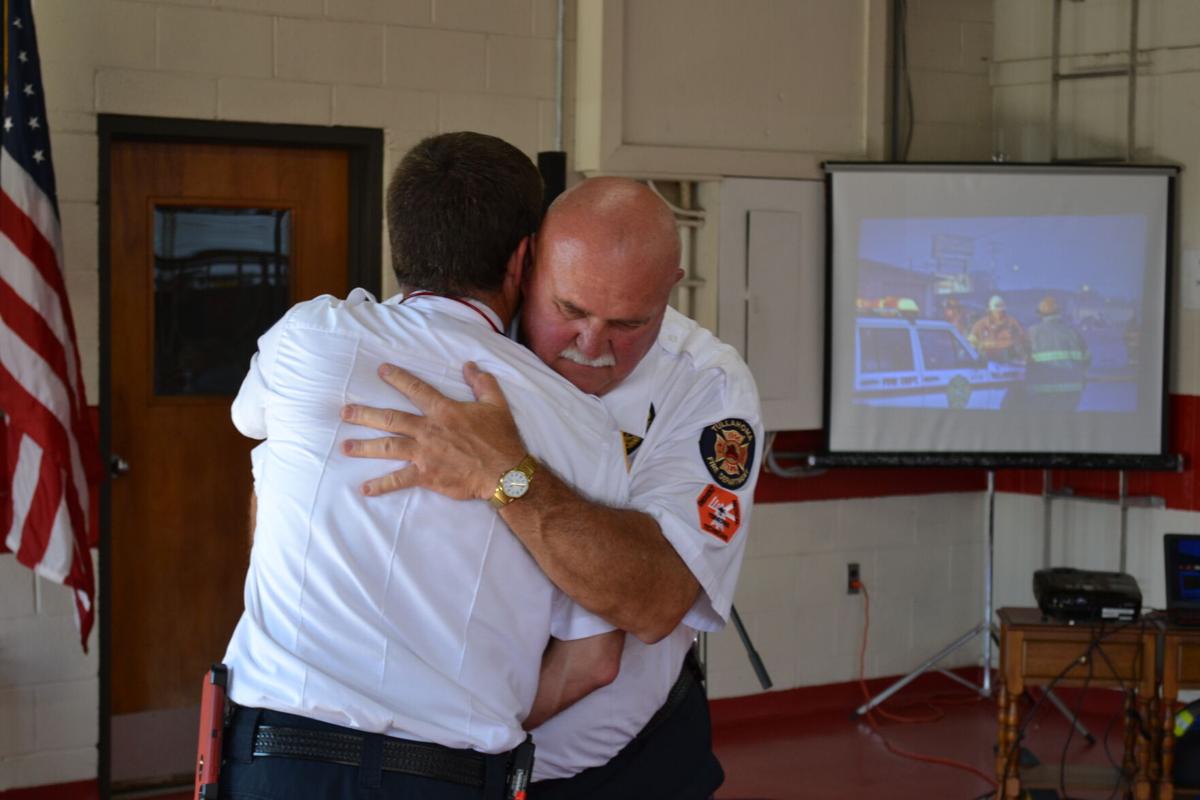 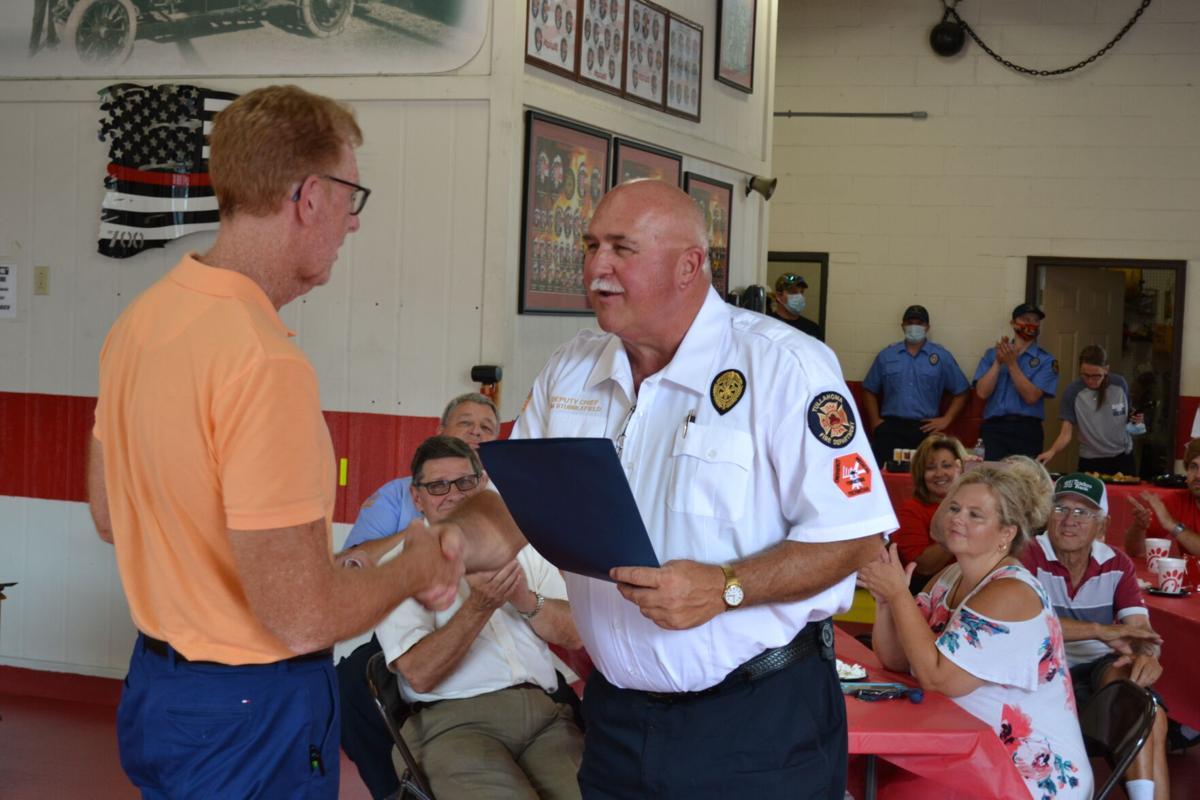 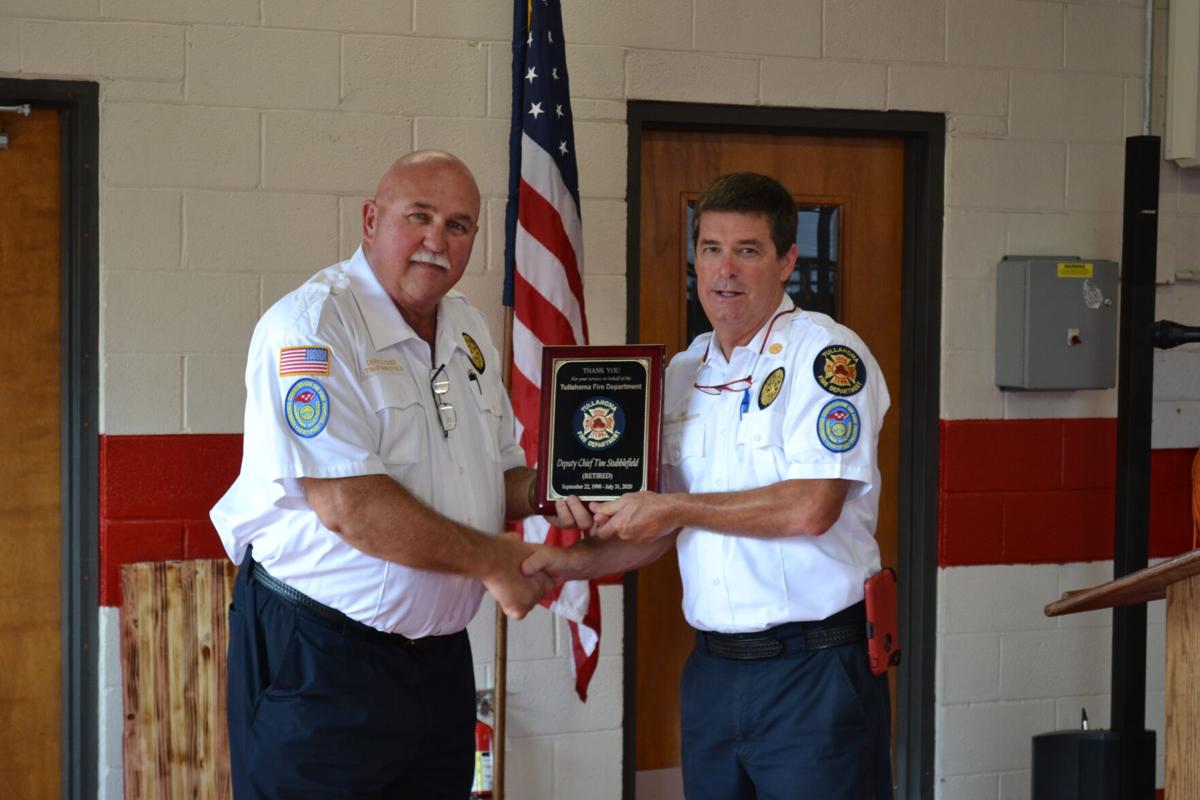 Tim Stubblefield, left, receives a plaque of recognition for his 30 years of service to the Tullahoma Fire Department from Fire Chief Richard Shasteen. 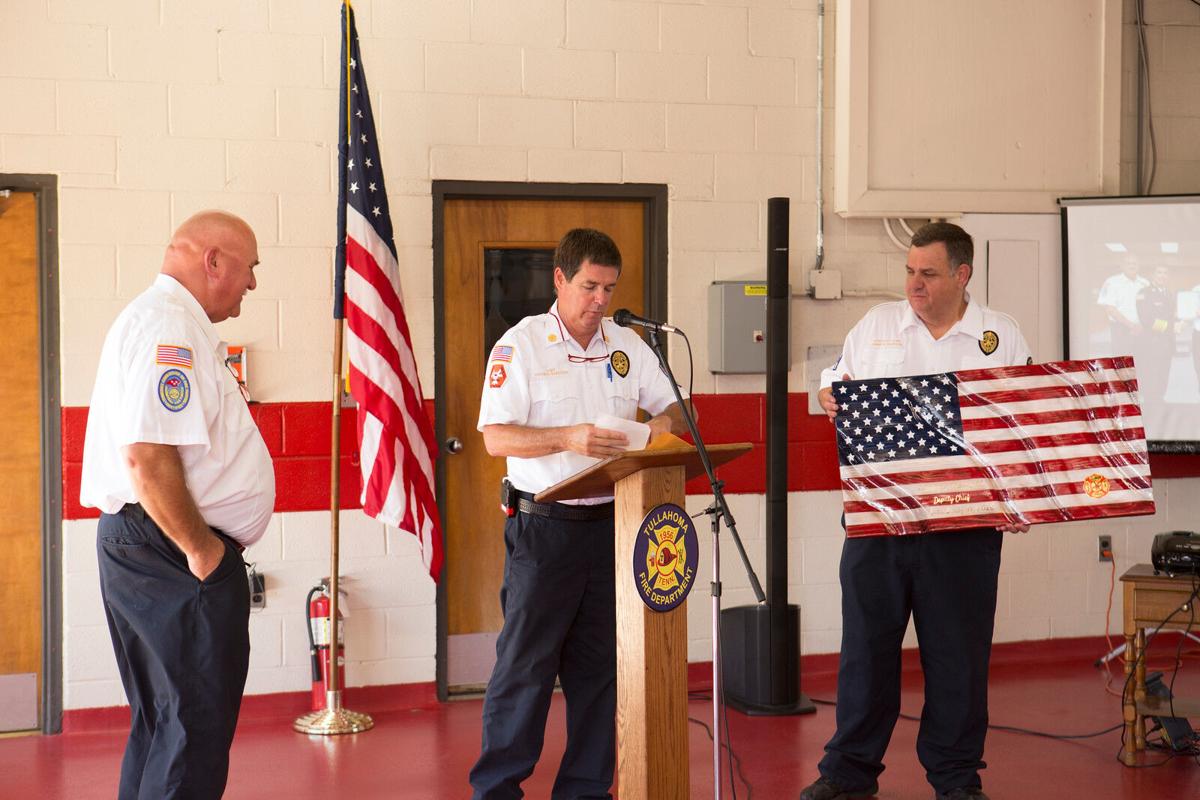 Tim Stubblefield, left, receives a plaque of recognition for his 30 years of service to the Tullahoma Fire Department from Fire Chief Richard Shasteen.

The Tullahoma Fire Department bid a bittersweet bon voyage to one of its own last weekend when Deputy Fire Chief Tim Stubblefield retired after three decades of service to the department.

Stubblefield completed his last day with TFD Friday, July 31, with a special retirement party held at the main fire station on South Jackson Street. Friends, family members, former colleagues and the county mayor all gathered to wish him well on the next phase of his life.

Stubblefield first started working for the city of Tullahoma in some capacity when he was 19 years old and applied for a job at the police department.

He built friendships and workplace acquaintanceships with people in both the police and fire departments, he said, finding himself hanging out with the fire department when he wasn’t working.

After spending so much time with the boys in the fire hall, Stubblefield said his interest in the department was piqued.

After a decade working for the city on and off, Stubblefield said he wanted to start a family, so he sought out a transfer to the fire department, which offered him a better work/life balance.

Unfortunately, in those days, Stubblefield said, the city had a policy that prevented employees from transferring from the police to the fire department.

“So I resigned from the police department,” he said, and the day he resigned as a police officer, he signed up for the reserve service for TFD.

The transition wasn’t immediate, he said. It took a few years of learning and hard work before he was an official firefighter.

“Back then, to get on the fire department here, somebody basically had to retire or pass away,” he said. “It just took a while. It took me two or three years to get on.”

While he was waiting for an opportunity to join the fireman fold, Stubblefield took a job with the local ambulance service and even got his Emergency Medical Technician license, gaining skills that both helped people in the area and also gave him more tools in his firefighter belt.

The rest, as they say, is history.

Over the years, Stubblefield said the most rewarding aspect of his time with TFD has been helping people.

“People are always in need, and the most rewarding experience has always been helping those families in need or helping a person that’s really in need,” he said.

On the other hand, Stubblefield said, things are also good when people don’t need the fire department.

“Any time we get a call, someone’s in need,” he said. “If they’re not needing our services, that’s a good thing.”

No matter what, Stubblefield said, receiving opportunities to help people has been the best aspect of his career.

“Helping somebody that’s really in need is rewarding to me and any firefighter, really,” he said. Getting to assist someone who is in pain and knowing that he can do something to make that person better was always what he looked forward to doing.

When he looks back on his time with the fire department, Stubblefield said he’s going to miss the people – both his coworkers and those he encountered on the job.

Being a firefighter for the last few decades really “fit my personality,” Stubblefield said.

“I’m a social person, and I’m probably going to miss that part of it, because I like to be around people,” he said. “I call them my family, the firefighting family.”

That social aspect of the job is something Stubblefield has gotten used to over the years, and passing each day without that everyday interaction will be an adjustment.

“That’s what I’m going to miss,” he said. “I’m going to wake up every day and not be able to go to a group of guys that I’ve been going to for the last 30 years. It’ll be a change, but it’s a change that needed to happen.”

As for his plans for his retirement, Stubblefield said the future is wide open.

“My plans are not to do anything,” he said with a chuckle. For at least the first six months to a year, Stubblefield said he plans to do nothing but putter around the new house that he and Peggy, his wife of 33 years, bought recently and not work.

“My plans are not to do anything,” he said. “I retired to retire.”

A small job in the future isn’t entirely out of the question, though it won’t happen soon.

Looking back on his career, Stubblefield thanked the city of Tullahoma, all his coworkers and friends and his family for supporting him throughout the years.

“I would like to thank the city for giving me an opportunity,” he said.

Each time he was hired by the city—three times in total—it took a chance on him and afforded him an opportunity, and he appreciated the city being willing to take that chance on him multiple times.

“I’m sure I’m not the only one that they’ve taken a chance on in the past, but I’m really thankful that they took a chance on me when they did. I appreciate them giving me that opportunity each and every one of those times.”

He also thanked his family for allowing him to pursue his career goals over the years.

“I want to thank my family for allowing me to do the job, because working for the fire department, you’re away,” he said. Firefighters work 24-hour shifts, so he was away from his family more frequently than he might have wanted to be. Having his family’s support the whole time afforded him the opportunity to make sure other people’s families were also taken care of.

“It puts a strain on your family,” he said, “so I want to thank them for putting up with that 24-hour period where their dad and husband wasn’t there. It puts a little more stress on the family, but they were real good about it.”

While leaving is bittersweet, Stubblefield said he could walk out the doors of Fire Hall No. 1 knowing the department is “top rate,” and he wants the community to know that as well.

While the community may not have been able to see the evolution of the fire department over the years like he has, Stubblefield said Tullahomans can “be proud of what they’ve got” in TFD.