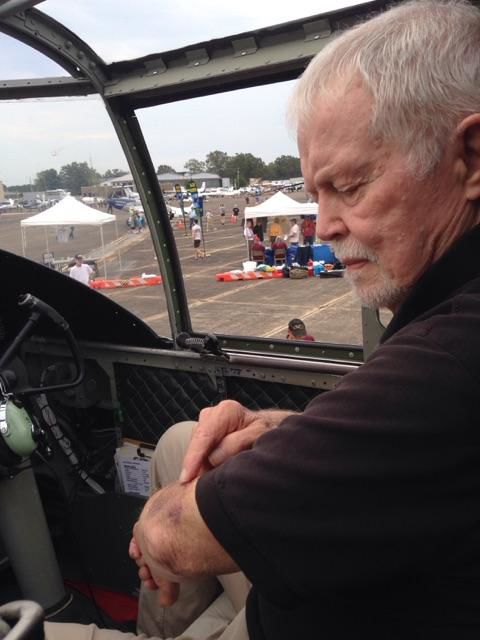 Gene Matkins shows the “dent” left on his arm after the plane crash 60 years ago that killed one of his crew. 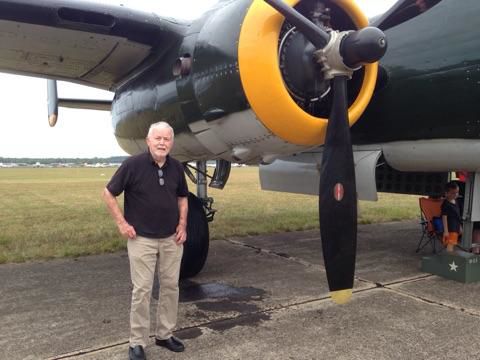 Gene Matkins stands next to a B-25 during a recent air show at the local airport. His visit rekindled memories of a fateful day in 1959 when he nearly died in a plane crash.

No matter how many years have passed the memories of a traumatic accident will remain as strong as the day it happened.

The Aircraft Owners and Pilots Association hosted an event in William Northern Field in September where they had a B-25 bomber plane on display.  Serving in the Air Force before working at ETF and ASTF as a test project engineer, Gene Matkins, 86, had the chance to see his favorite plane for the first time in 60 years.

Yet, seeing the B-25 on display brought back memories of an accident that took the life of one of his crew.

Matkins was stationed at Little Rock Air Force Base, Arkansas in February 1959, where he was certified to fly several types of twin and single planes but the B-25 was his favorite. “It was easy to fly, got pretty good speed, and it didn’t stall that much,” said Matkins as he described what it was like flying in the B-25.

Matkins was assigned to copilot the plane as it made its way to Louisiana to pick critical spare parts to bring back to Little Rock. He flew with the pilot, the crew chief Sergeant Wilson, the major, and the flight surgeon as part of the crew.  Flying to Louisiana went without incident; however, it was when the parts were being loaded up when someone noticed there a problem.

The flight sergeant said one of the cylinders in the right engine was cracked. When asked by the sergeant if the plane was to fly, the pilot said they should “probably be okay” to make it back to Little Rock.  When they got back to Little Rock, it was dark, cold and rainy. They got in the flight pattern and into the final approach. Halfway through the path, they started hearing loud noises, like an explosion, in the right engine. Matkins explained that there wasn’t much gas in the engine, since it was idle during the descent, but the rpm’s were up so it was firing back to the engine, causing the sound as well as a flash of light from the crack.

Matkins looked at the engine and turned to the pilot who was asking what’s wrong. He looked at his instruments and saw that they were dropping speeds, the nose of the plane had raised up, and turning to the right.  Matkins took over and tried to turn the plane to the left.  They had banked almost 180 degrees as they made their way back to base. He described the landscape during his interview with The News as “mostly post oak trees, broom sage, and big boulders scattered across the country side.”

Matkins knew they needed air speed so he pushed the nose down and had the left engine going up.  By that time; however, they hit a tree that took part of the right wing off, six to eight feet from the right engine. They hit another tree that came by the pilots left arm and the engine. It went back to the main spar, which broke the tree off.  Fortunately, they were able to hit the only farm in the area. Had they been in the woods, the results would have been more devastating.

“I know the Lord kept us alive,” said Matkins, noting they hit the only clear area of the farm.   They hit the ground and the Plexiglas nose came off.  It was ground up into nothing while dirt came up from the nose and into the cockpit.  The plane slid up to 150 feet from the house, where a farmer, his wife, and three children were eating supper at that end of the house.  Matkins turned around and saw the hole that the tree made into the plane.  He didn’t see Sgt. Wilson.

Before looking for Wilson, Matkins smelled gasoline and thought “My god, did we come this far to die in a fire?”

Matkins got out of the plane by releasing the top hatch between the two pilots, as the sliding window was too small to escape through. He then crawled out and jumped to the ground.  He briefly looked for Wilson when he saw some sparks flying, prompting him to reach back through the window to turn off the batteries. It was while turning them off to prevent a fire that he realized that there was something wrong with his right elbow.  He had broken a bone in high school so he knew what the feeling was: he broke his right arm.

Matkins said when they hit the trees, it jerked the plane hard on the right and his right arm went through sliding glass window.  The window was a half-inch thick. He has a big dent in his arm where he hit the window.

After making sure there were no sparks to start a fire, he resumed his search for Wilson. He followed the plane’s path from the landing site and found Sgt. Wilson dead. He was jettisoned as he was going to bail out but didn’t make it. When he came back to the plane, the flight surgeon, pilot, and major exited out of the plane in good shape. The farmer came by to find out what was happening in his backyard while the emergency crews came.

Taking a moment, Matkins said, “That was in February 1959, 60 years ago, and it still makes me nervous just thinking about, just reliving it again.”

When he got to the flight surgeon’s office later that evening, they couldn’t find anything wrong with his arm at first, so he was sent home and he called his wife letting her know he was okay.  Matkins was sent to the local radiologist and saw that he had a crack in the two bones that make up the joint in his upper arm. He wore the cast for a long time, even after leaving the service a month later.  He was offered to get his Master’s Degree through the Air Force but he declined the offer as he wasn’t planning on a career in the Air Force.  He moved to Baltimore with his wife for some years before eventually coming to Tennessee.

With some assistance, Matkins was able to sit in the copilot’s seat in the B-25 for the first time in 60 years at the local event here in Tullahoma. He didn’t fly again after he left the Air Force due to flying being an expensive hobby.

“It’s vivid in my mind as you can imagine.  The events, the clicking and the whacking and the hitting the trees all kinds of stuff. Events one after the other … but I know the Lord kept us alive through that for some reason. And that’s why I’m here in Tennessee some years later.”