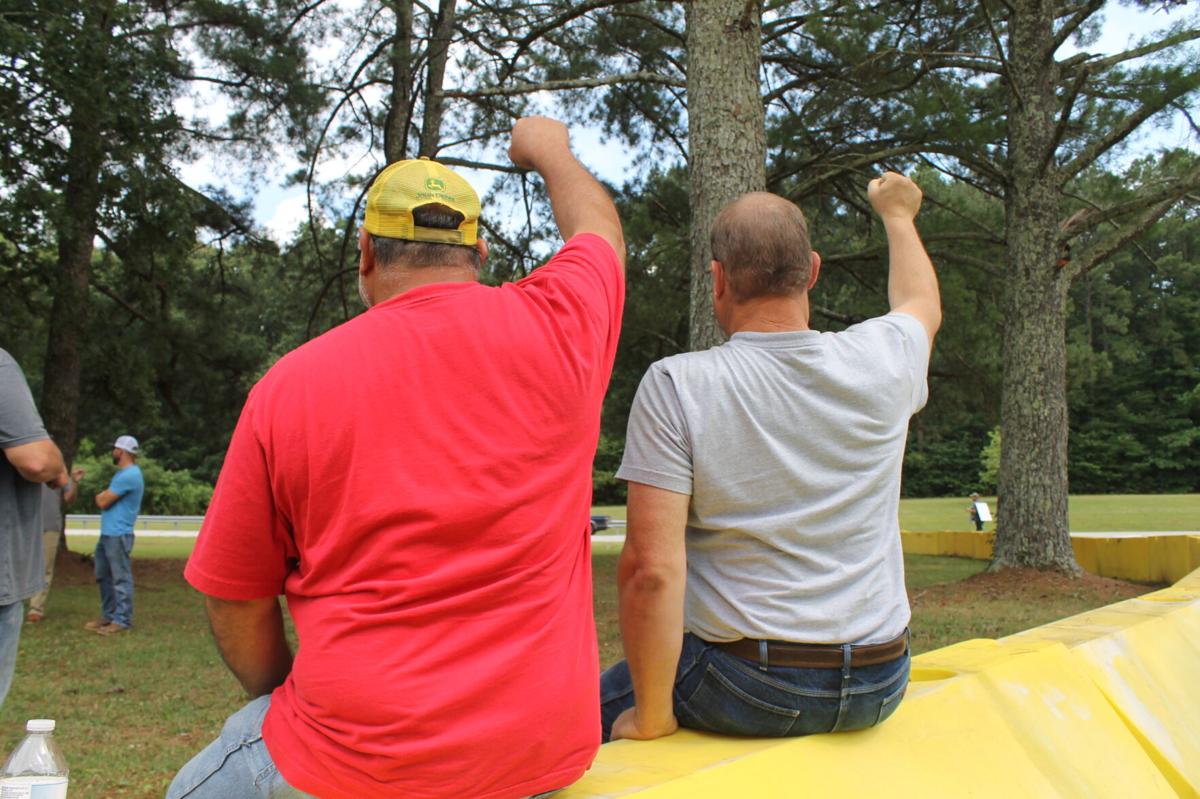 Union members on strike raise their fists in solidarity as cars pass by honking their horns in support of the Air Engineering Metal Trades Council. AEMTC members at National Aerospace Solutions, LCC (NAS) when on strike at 1 p.m. Friday, July 2. Picketers ask anyone passing by Gate 2 who wants to show their support for the picketers to honk their horns loudly. 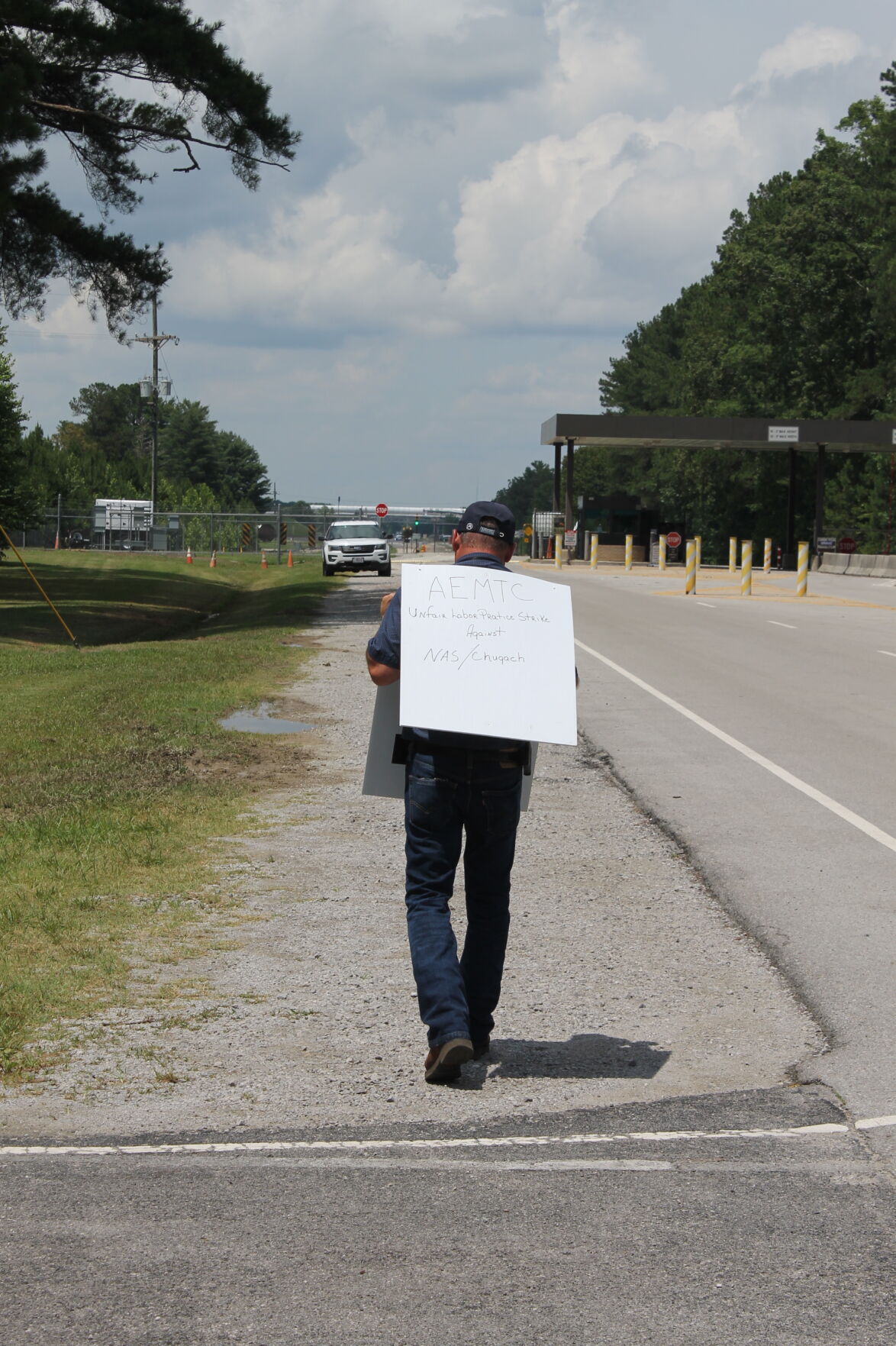 A picketer walks along the path outside Gate 2 at Arnold Air Force Base Friday, July 2. Union members of the Air Engineering Metal Trades Council at Arnold officially went on strike at 1 p.m. Friday. 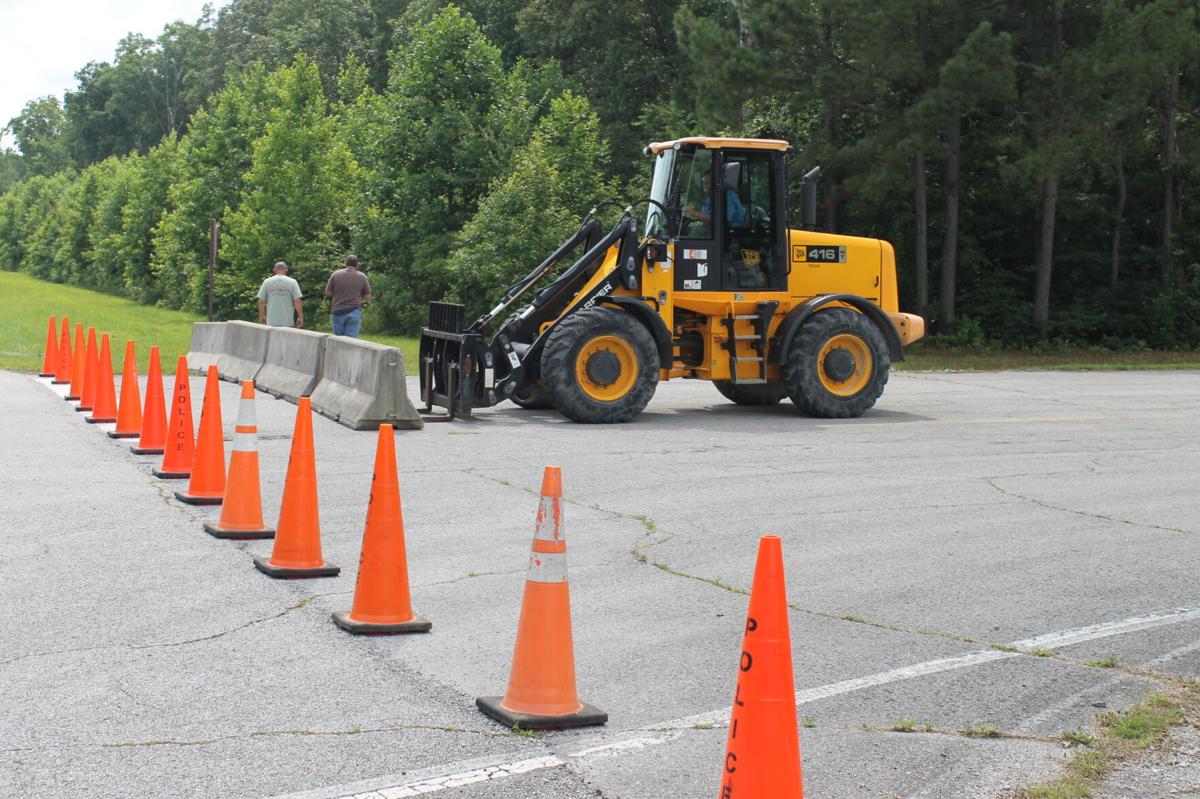 A forklift places concrete barricades outside Gate 1 of Arnold Air Force Base Friday, July 2, as union members of the Air Engineering Metal Trades Council went on strike at 1 p.m.

Union members on strike raise their fists in solidarity as cars pass by honking their horns in support of the Air Engineering Metal Trades Council. AEMTC members at National Aerospace Solutions, LCC (NAS) when on strike at 1 p.m. Friday, July 2. Picketers ask anyone passing by Gate 2 who wants to show their support for the picketers to honk their horns loudly.

A picketer walks along the path outside Gate 2 at Arnold Air Force Base Friday, July 2. Union members of the Air Engineering Metal Trades Council at Arnold officially went on strike at 1 p.m. Friday.

A forklift places concrete barricades outside Gate 1 of Arnold Air Force Base Friday, July 2, as union members of the Air Engineering Metal Trades Council went on strike at 1 p.m.

This story has been updated to include a statement issued from NAS.

A small group of picketers gathered outside Gate 2 of Arnold Air Force Base, which was pre-designated by AEDC Commander Col. Jeffrey Geraghty as the official protest spot earlier this week.

Strikers said they are ready to be outside Gate 2 for the long haul. By late afternoon, the crowd of picketers had grown some, with union members carpooling to the picket line. The parking lot outside Gate 1/Arnold Fitness Center, was set up as a de facto parking area for union members to gather in order to carpool; however, AEDC police had blocked half the lot with cones. Additionally, Gate 1 was blocked by cones and concrete barricades moved over by a forklift.

Strikers told The News that if anyone wishes to show solidarity with them, they should honk loudly as they pass by Gate 2.

Hart spoke with The News again Friday afternoon, saying the next steps were to wait for NAS to come back to the table and negotiate with the union.

"The next steps are the company and the union, we need to get talking and come to an agreement," he said. "The company needs to come off their hardline positions that affect our economic wellbeing and our health and our welfare. The company has been very, very rigid. They're responsible for this very unfortunate incident today that affects not only the Air Force and the workers, but also the communities of Manchester and Tullahoma, who we are fully committed to."

Hart said they apologized for any inconvenience the strike would cause on the two cities, but the union had no other choice.

"They put our backs to the wall," Hart said.

"If you're familiar with Arnold Air Force Base and the job that gets done in there, it's a very, very dangerous job, and workers get hurt all the time," he said. "Sometimes they get severely hurt. We have a disability plan which, three years ago was cut from a 24-month plan to an 18-month plan, and the company is trying now to cut it further."

Hart said the union has anywhere from 30 to 50 severely injured workers at Arnold, making the cut to disability a non-negotiable item.

"The health and safety for our members is a non-negotiable item," Hart said.

Wages, he added, had to stay above inflation, particularly if the workers were going to get health care increases and keep up with the rising costs of gas, food and housing.

"What's the sense in getting a raise that doesn't keep up with the pace of inflation in a sizzling economy such like this?" he questioned.

Of the strategy in going on strike Friday afternoon, Hart said it was completely up to the membership.

"They vote on it, and they decide," Hart said.

While conventional wisdom may have held that the members continue working through the Fourth of July holiday and get extra hours or holiday pay, Hart added, the members chose instead to "make a statement" to NAS.

"The workers at Arnold Air Force Base decided to go today because that extra money, while they need it, they wanted to make a statement that they're serious, and I commend them for it," he said.

As of 5 p.m. Friday, Hart said he had not heard from NAS, nor did he expect to, as it was a "slow weekend."

"It's the holiday," he said. "I'm hoping everybody gets together and enjoys their families to the best of their abilities and, hopefully, get back to the table as soon as Tuesday comes."

But, he added, the union was "ready, willing and able" to come back to the negotiating table immediately--"now, tonight, tomorrow, 24 hours a day, seven days a week."

If NAS decided to come to the table this weekend, Hart said, they would have to be "serious about coming to an agreement that serves the workers, serves the company, serves the Air Force and, by extension, the community."

As far as the anticipated effect the strike will have on the mission of AEDC, Hart said he believed the Air Force would be well-adapted to deal with change.

"Hopefully, they'll go to sleep, have a good night's rest, and they'll come back with a clearer attitude, because this was a strike that did not have to occur except for the recalcitrance of a stubborn management team."

Hart ended his statement with well wishes for "a better day soon."

NAS issued a statement earlier this afternoon, saying the work at AEDC would continue despite the strike by AEMTC members. NAS also claimed AEMTC membership did not respond to a "Last, Best and Final" offer from the company.

"NAS delivered a Last, Best, and Final offer to the AEMTC at 12:30 p.m. on Wednesday, June 30, and the AEMTC members have not yet voted on the company’s proposal," the statement said.

"NAS remains hopeful negotiations will come to a positive conclusion with a vote to ratify the new agreement by AEMTC membership," said NAS General Manager Richard Tighe, Ph.D. "In the meantime, NAS operations at AEDC will remain safe and productive. We will continue to focus on the daily priorities of safety, security, quality mission delivery and efficiency."

AEMTC is the sole bargaining agent for union affiliates and represents approximately 690 skilled workers at AEDC, according to NAS. The company further stated AEMTC members who choose to continue working during the strike should contact their supervisor or check the NAS external website for instructions.

This is a developing story. We will update it as we have more information.

Officials with National Aerospace Solutions, LLC (NAS) say some of the claims made by the Air Engineering Metal Trades Council (AEMTC) are ina…

Strikers at the picket line

As of Thursday, July 8, strikers were still visible at the Gate 2 picket line of Arnold Air Force Base.

Are you going to the Coffee County Fair?