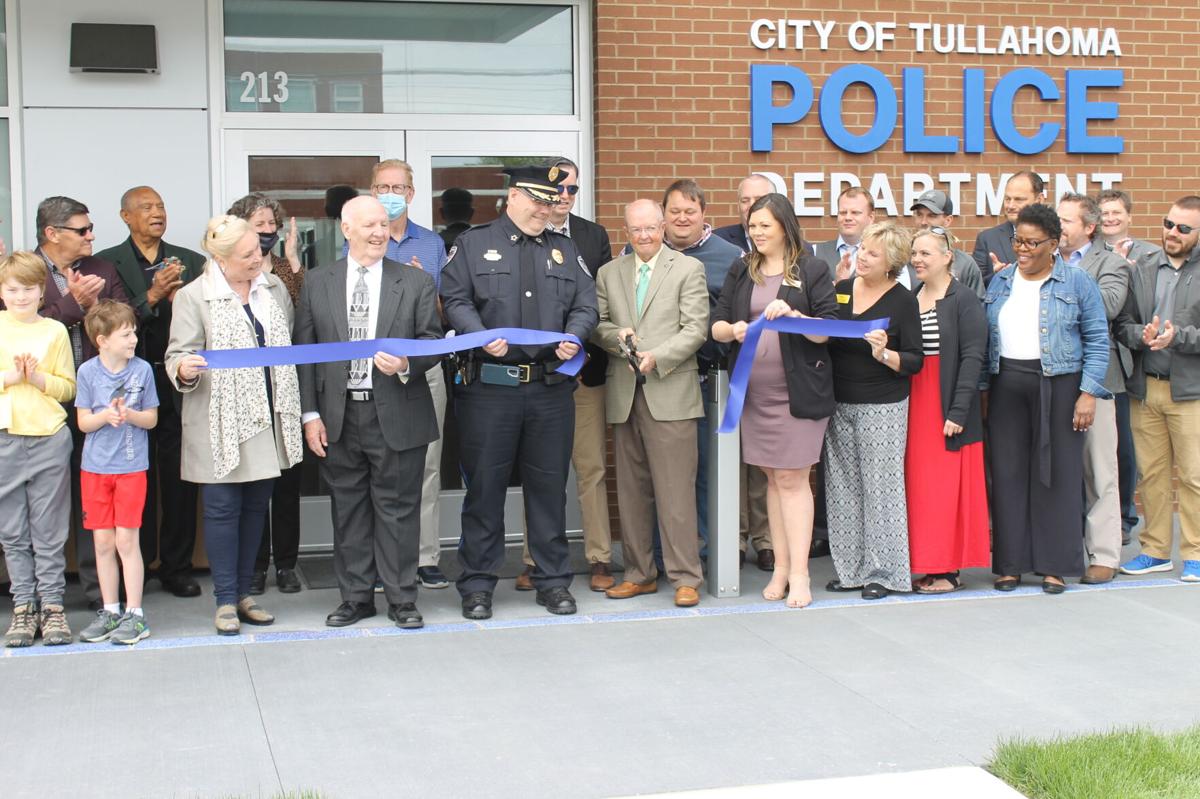 Scores of people stood behind Mayor Ray Knowis as he cut the ribbon for the new Tullahoma Police Department facility. 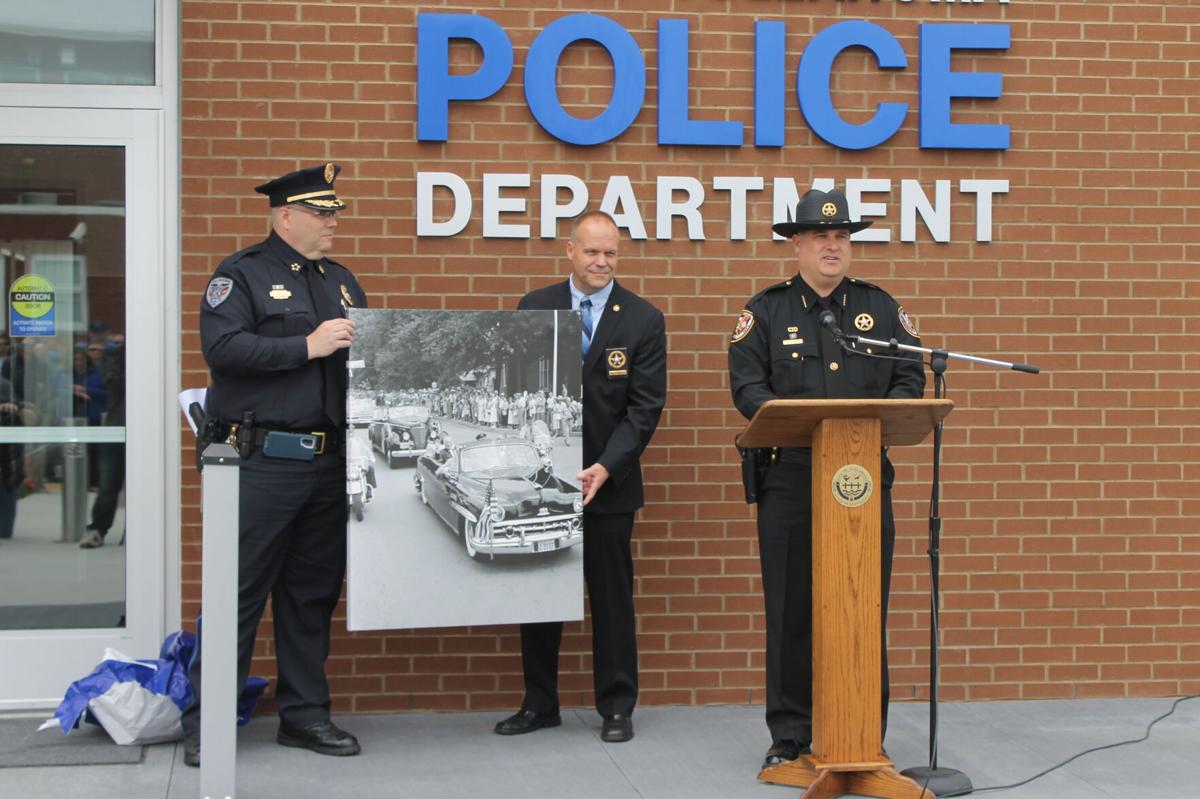 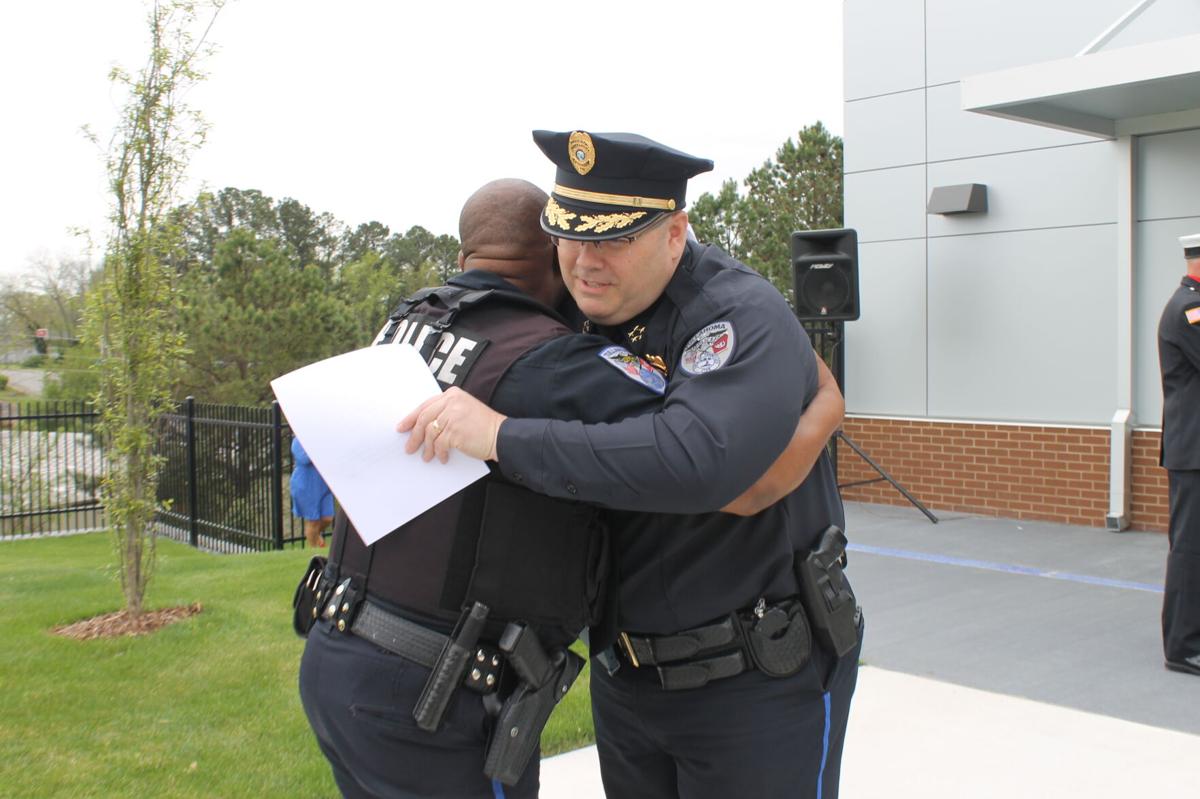 Scores of people stood behind Mayor Ray Knowis as he cut the ribbon for the new Tullahoma Police Department facility.

The police station is a multi-year, multi-million-dollar project first embarked upon by former Mayor Lane Curlee and his previous board of aldermen. The land on which the new police headquarters sits was donated to the city by prominent residents Dan and Fran Marcum. The new station sits just behind the current municipal building, which formerly housed both the fire and police departments decades ago. The building was designed by Upland Design Group of Crossville, and constructed by American Constructors, Inc., of Brentwood.

The event was called to order by Police Chief Jason Williams. He first invited Willie Young, the school resource officer at Tullahoma High School and recently-named Tullahoma’s Finest Police Officer, to give the invocation. He was followed by the Tullahoma Fire Department Honor Guard, who raised both the American and Tennessee flags up the flagpole before lowering them to half-mast in recognition of the victims of the FedEx facility shooting in Indianapolis. Once the flags were raised, Lt. Phil Henderson of TPD led the crowd in the Pledge of Allegiance.

“This new building will not only help us meet our community’s expectations by providing a platform from which we can meet the demand of our town’s future needs, but it will also help us evolve so we may continue to meet those new demands and keep up with current and future technology and the demands and strains it may place on our profession,” Williams said.

He highlighted the building’s expanded training room that will allow for on-site education and training for officers and specialized classes in conjunction with other law enforcement agencies.

“Opportunities like these allow our agency to forge partnerships and friendships with other agencies, which in this day and time are crucial for all communities to have success,” he said.

Coffee County Sheriff Chad Partin offered his own remarks, congratulating the city and Williams on the brand new facility. He also offered Williams and the police department two gifts to hang in the building as he sees fit. The first was an enlarged photo of former President Harry S. Truman driving through town during the dedication of Arnold Air Force Base in the 1950s, and the second was an official state seal gifted with the cooperation of State Sen. Janice Bowling and State Rep. Rush Bricken.

Mayor Ray Knowis also spoke on the occasion, thanking all those involved in the planning, design and construction phases, including his predecessor, the former and current board members, City Administrator Jennifer Moody, the members of the Tullahoma Municipal-Regional Planning Commission, the Marcum family and all those who came to the grand opening.

Following the official ribbon cutting from the Tullahoma Area of Chamber of Commerce—in police blue—which the mayor snipped with the scissors, Williams invited all attendees to come tour the building and take a look inside the new facility and take part in some light refreshments. Attendees were able to take a look at areas of the facility they hopefully will never have a need to visit in the future, including the evidence locker, interview rooms, intoxication hold room and more. City officials, including Moody and Williams, were on hand to explain the plans for the building, including a “history wall” that will be populated with memorabilia detailing the history of the police department and its growth.

According to Williams, the department is still waiting on some technological preparations before moving into the new facility. He told The News he hopes to have his department moved into the new building by the end of the month or the first of May.

The new police station is located at 213 W. Grundy St. in Tullahoma.