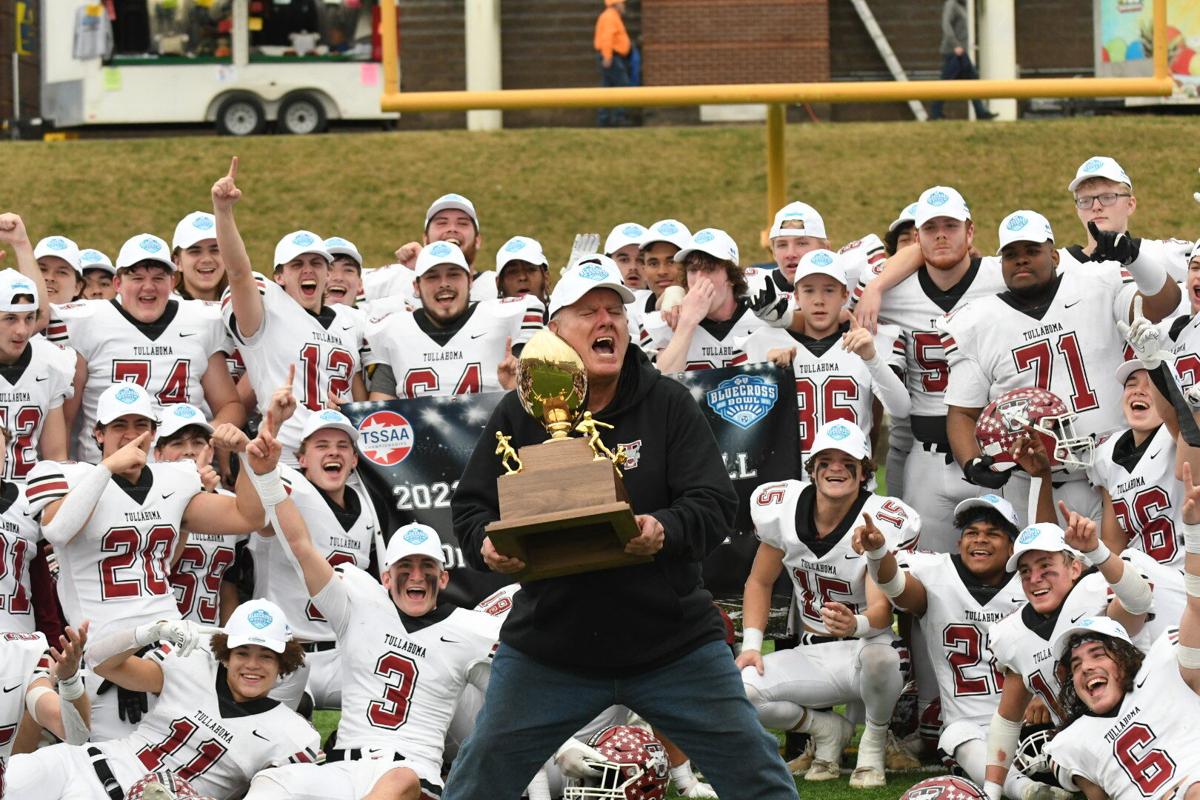 Wildcats biggest fan Mike Finn hoists the state championship trophy Saturday afternoon as the team celebrates following their 21-14 double overtime win over Elizabethton at the BlueCross Bowl in Chattanooga. The win was the first gridiron title for the ‘Cats in over 100 years of football. 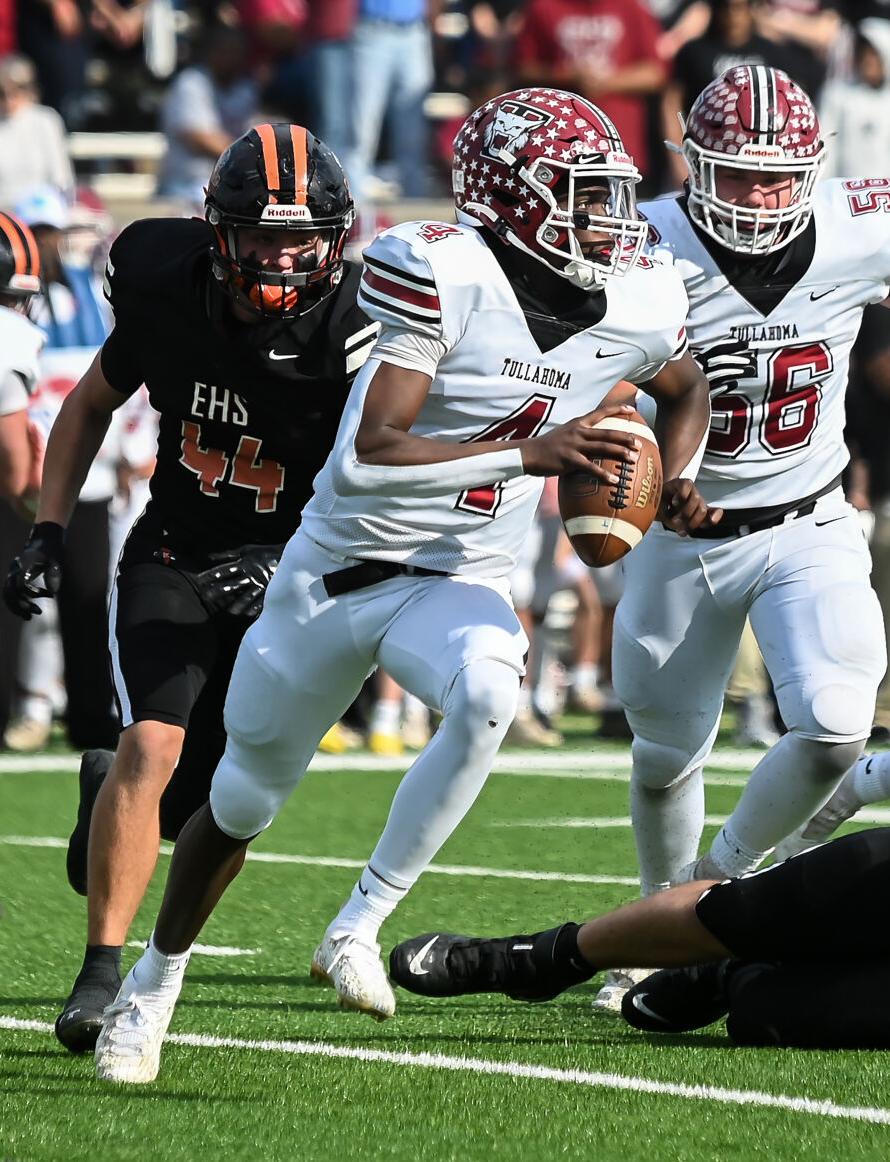 Quarterback Ryan Scott sheds a Cyclone tackler as he gashes the defense for a big gain in Saturday’s win. Scott was named championship game MVP.

T-Town now stands for Title Town after the Tullahoma Wildcats ascended to the mountain top, knocking off two-time defending champion Elizabethton to claim the school’s first ever gridiron championship, beating the Cyclones in double overtime 21-14.

The ending was set in stone when Krys Uselton picked off the Cyclone pass in the end zone after Ryan Scott connected with Jacob Dixon to give Tullahoma the lead in double overtime. Pandemonium ensued at the BlueCross Bowl 4A championships in Chattanooga as the ‘Cats erupted in jubilation, finishing the season at 15-0 and hoisting the title.

Their win came after a slugfest between the two 4A heavyweights, pitting the Tullahoma fast-strike offense against the methodical, time-eating offense that had won Elizabethton the last two state titles.

Tullahoma drew first blood on their second possession of the game with an eight play, 86-yard drive that began on their own 14. The score came after Keishawn Cummings gashed the Cyclone defense with a dash up the gut for 44 yards, setting the Tullahoma offense up at the 18 yard line as the first quarter ended in a scoreless tie. After a short flare pass that brought them inside the 10 yard line, Quarterback Ryan Scott then did the honors, calling his own number from eight yards out. A Justus Chadwick extra point gave the ‘Cats a 7-0 advantage at the 11:13 mark of the first quarter.

However, the two-time defending state champs would answer the early salvo by mounting their second long drive of the half. During the first quarter, Eizabethton mounted a long drive that landed them on the doorstep of the Tullahoma goal line; however, a pass into the endzone on fourth and goal was incomplete when Cyclone receiver Jack Roberts stepped on the end line, surrending the ball over to the ‘Cats on downs.

The Cyclones would complete the job on their second half drive as they mounted a 13-play, 80-yard journey from their own 20 that culminated in a 3-yard touchdown strike hauled in by Jake Roberts at the 4:31 mark of the second. The extra point knotted the game at 7 but it was not the last time the Cyclones threatened in the first half.

Tullahoma stalled on their ensuing possession and a short punt by Chadwick set the Cyclones up for business late in the second at midfield. However, their drive stalled and they subsequently fumbled the ball back over to the ‘Cats at the 35 with a handful of ticks left on the clock, sending the squads into the locker room knotted at 7.

Cummings was the leading rusher for the ‘Cats in the first half, carrying the ball five times for 53 yards. Bryson Rollins led Elizabethton with 72 yards on 17 carries as he went 12-19 in the first half with 90 yards and a passing touchdown. Scott was four-for-five for 29 yards in the first half as the lion’s share of offense came thanks to Cummings’ long jaunt from scrimmage late in the first quarter.

The third quarter began with a strong Tullahoma drive that began at their own 35. Scott was able to engineer a controlled short passing drive to work the ‘Cats down the field. They were bolstered when Scott was hit late out of bounds, setting Tullahoma up at the 16. However, the ‘Cats returned the favor with a holding call the next play, putting them back 10 yards. It was the first Tullahoma penalty of game but proved to be a drive killer as, faced with third and long, Scott was picked off in the endzone, setting the Cyclones up at their own nine.

What followed was another time consuming drive as Elizabethton ticked off most of the third quarter thanks to Rollins who proved to be a Houdini on a pair of third-and-long situations. On two occasions, Rollins was in the grasp of Wildcat defenders when he was able to unload the ball for first downs. However, his magic ran out and the Cyclone drive ended at the Wildcat 40. But, despite the stalling of the drive, the field was flipped as the ‘Cats found themselves pinned at their own one on the ensuing punt, and were barely able to avoid being stopped in their own end zone for a safety. Able to only push the ball to the eight, they were forced to punt with a minute left in the third.

Elizabethton returned the ball to the Wildcat 36 but was pushed back to their own 49 thanks to an unsportsmanlike penalty as the third quarter ended with the teams still knotted at 7. Another penalty doomed the Cyclone drive, forcing them to punt as the fourth quarter got under way. They again pinned Tullahoma deep, their drive starting at their own 2-yard line. However, Tullahoma didn’t stay pinned long as the ‘Cats came blazing out with a pass that was bolstered by a penalty against the Cyclones. A long pass from Scott set Tullahoma just inside Cyclone territory until a penalty on Cummings for hurdling pushed them back to their own 36. The ‘Cats were able to recover somewhat but were still forced to punt when the drive stalled at the Cyclone 44. Elizabethton took over at their own 11 with 7:38 left on the clock and looked to have a big gain off a Rollins third down bomb but the 40 yard pass was negated by a holding call, bringing the ball back to their own 3. They were forced to punt with 5:43 left in the contest.

A return to the 25 put the ‘Cats in business. Scott then hit a flare pass to the 10 that just cleared the fingertips of a Cyclone defender. Cummings inched the ball closer with a 7-yard jaunt but was then stuffed for no gain on the next play, setting up third and goal. The resulting play saw the ‘Cats stopped one yard away from pay dirt with 2:36 left.

With the state title hanging in the balance, Coach John Olive called a time out, left his five-star kicker on the bench and opted to go for it as the ball rested on the 1-yard line. The attempt came up inches short even as Tullahoma players raised their hands, thinking they had broken the plane.

Elizabethton was able to claw its way out from the shadow of its own goal posts with the help of an unnecessary roughness call against the ‘Cats but was still forced to punt after a two-minute drive.

Tullahoma got its hands on the ball with 33 second left in the tilt, starting the drive at its own 24. A Jaxon Sheffield 20-yard rush up the gut gave the ‘Cats hope at their own 44. Scott then rushed to the Cyclone 43 with nine ticks left on the clock. However, Tullahoma ended up coming up 13 yards short on their resulting pass, sending the contest to overtime. Cummings was immediately able to run in a 10-yard run in the first overtime, forcing the game to its second and deciding overtime.

Game MVP Ryan Scott led his squad with 16 carries for 88 yards while Cummings had 10 runs for 73. Scott was 12-for-16 in the air for one TD and one pick. Jacob Dixon had seven catches for 55 yards and a TD while Brody Melton had two snags for 36 yards.

Look for complete coverage and pictures in Wednesday's edition and don't miss our 32-page championship special edition next Sunday.