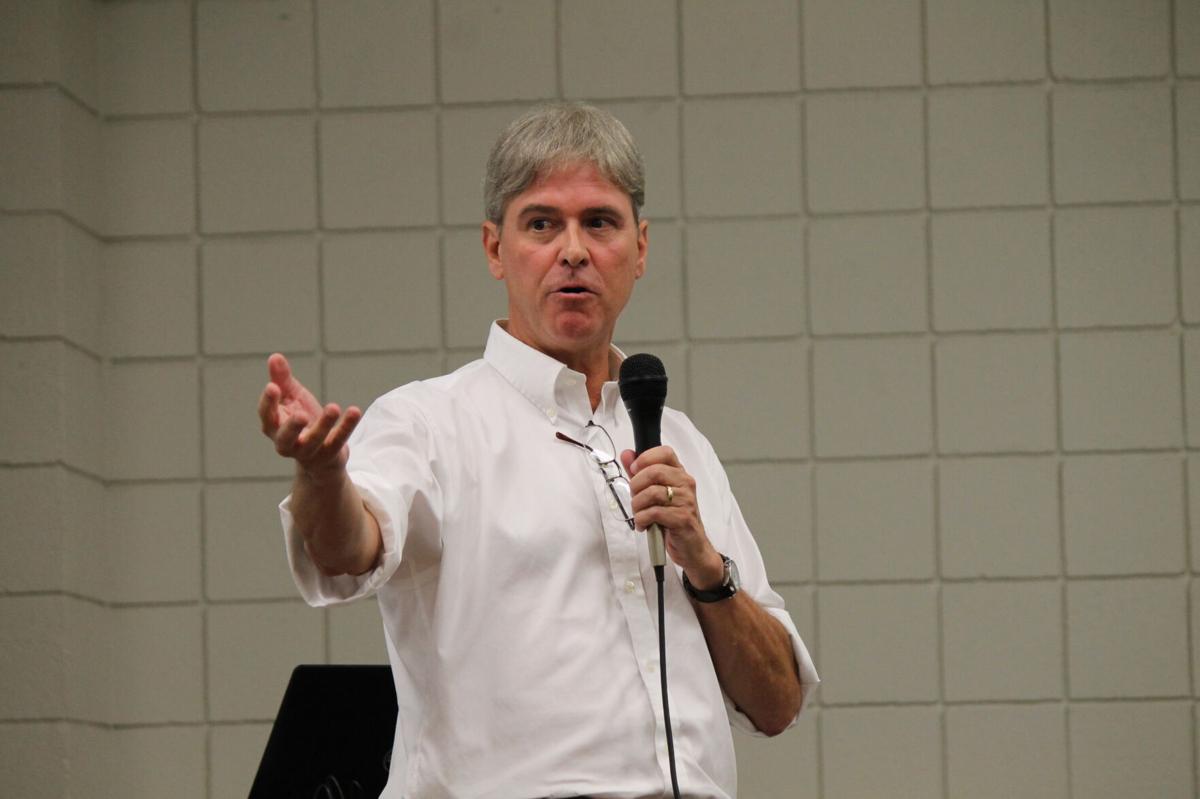 Paul Walker of The Walker Collaborative presents information on Tullahoma at the kickoff meeting for the city’s comprehensive development plan meeting held this month. Walker said the crowd was the biggest he’s seen for a community Tullahoma’s size in many years. 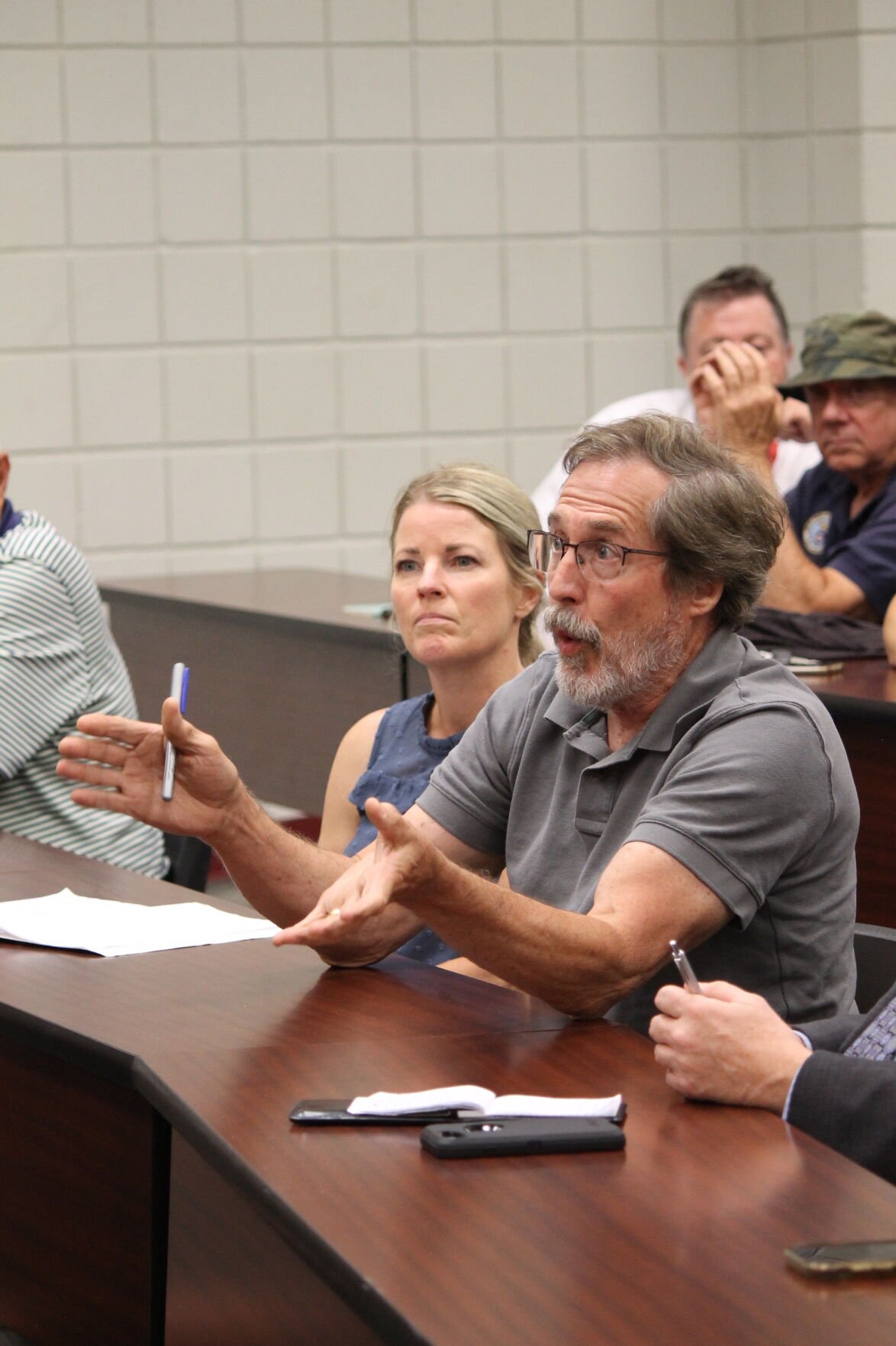 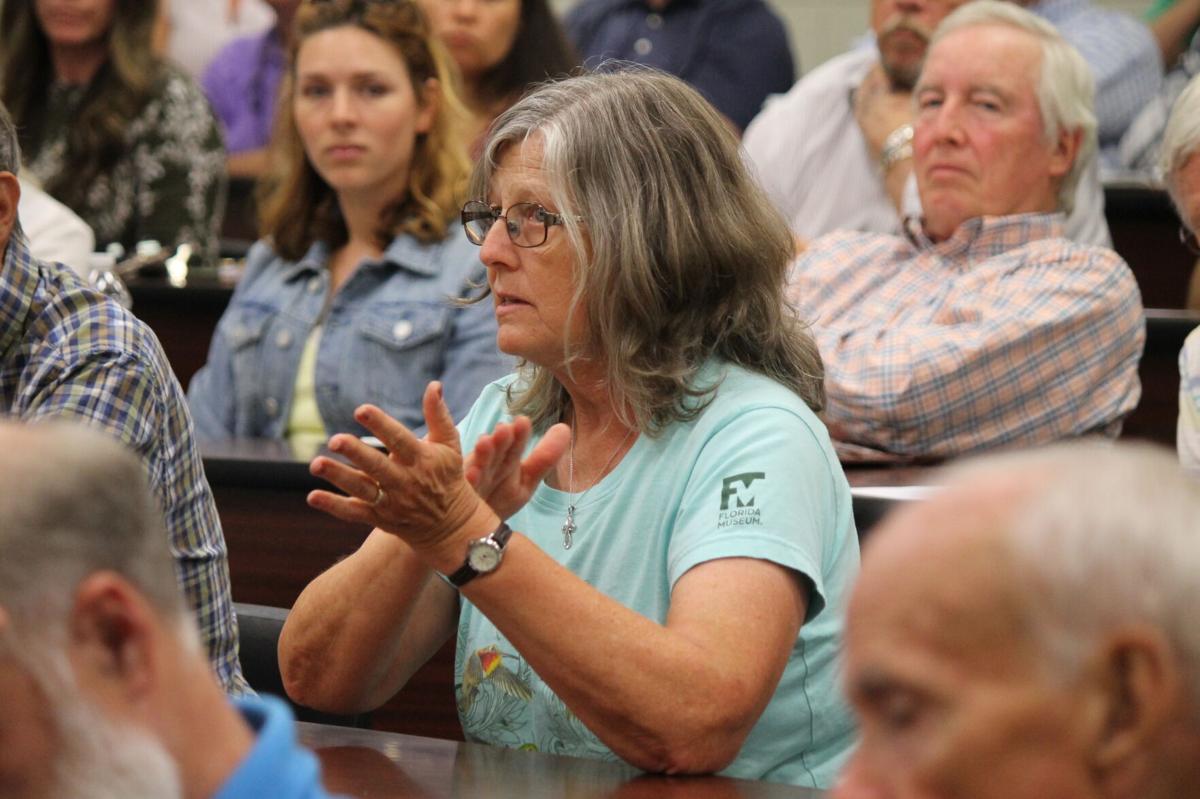 Citizens were encouraged to voice their wants, wishes and concerns for the city’s comprehensive development plan at the kickoff meeting for Think Tullahoma 2040.

The city officially kicked off the plans and preparations for its new comprehensive development plan this month with a community input meeting—the first of many that will help The Walker Collaborative gather the data necessary to help build the plan that will guide the city to 2040.

Held in the Tullahoma High School lecture hall with standing room only, representatives from The Walker Collaborative presented basic background information and research on the community and sought concerns to address as the new comprehensive plan is developed over the next several months.

Some things they group noted included the city’s lack of small-scale multi-family residential options—the city has more large-scale residential housing, like apartments, over duplexes and the like—the number of people who commute to and from the city for work—approximately 79% of people who work in Tullahoma commute from outside the city limits while around 69% of residents commute outside the town for work—and the relatively low number of different zoning districts the city has. Additionally, the group said, while Tullahoma has 180 miles of roadways within the city limits, there are only around 35 miles of sidewalks, including two state bike routes that pass through the community.

After presenting the initial research, the group then fielded questions and concerns from citizens who attended the meeting.

Susan Finger pointed out her concern with landscape development as well as the idea of a “buffer zone” that puts the majority of residents in Tullahoma within half a mile of a recreation opportunity, including a park, the greenway or a community center. She said concept plans were created under previous Mayor Lane Curlee, who sought to have 90% of Tullahomans living within that half-mile zone. Finger said currently only 52% of residents are in that buffer zone.

Other concerns centered on the city’s lack of a centralized gathering space downtown, such as a courthouse square. Citizens suggested the group look into the possibility of having a central plaza downtown in order to accommodate it.

In response, Paul Walker said he and his team had previously been involved in creating comprehensive development plans that created a new central space like a square. Those squares then become iconic imagery for marketing purposes and tourism draws, Walker said.

Others in the audience, including Candy Couch and Florence Hull, countered the claim, saying South Jackson Civic Center was originally designed to be the town square in the 19th century and it fit the bill for a centralized gathering space.

Another concern citizens raised was the use of adding green space to the community without encroaching on property rights of individuals, which Walker said could be achieved through “friendly sales” of property or easements for the usage of certain lands. Walker added that the city of Shelbyville is currently going through that process now.

Walker further stated that one of their ideas was to revitalize the downtown area, as the area can serve as a tourism boon for the community.

“People judge a community by its downtown,” he told the crowd.

Citizens also voiced concerns over proper and improved utilization of existing assets, such as Short Springs Natural Area. The popular hiking area draws visitors from across the country but has extremely limited parking and no sitting or picnic areas for people to enjoy. How the group could help make that area more accessible for increased parking while also keeping the natural beauty of the space would be something citizens would like to see, they said.

Related to green space, Motlow President Michael Torrance said the college was keenly interested in extending a walking or biking path that connects the campus in Moore County to Tullahoma and other communities.

“Let’s be a destination,” he said at the meeting.

Accessibility was also listed as a major item that needed to be addressed, as several areas in town had crumbling sidewalks that were not accessible to differently-abled persons or lacked sidewalks at all.

Robin Keel asked if the group could keep in mind that the community should be higher than the bare minimum for accessibility going forward. He said he wanted to see Tullahoma go “above and beyond for the differently abled.”

Walker then shifted the conversation to solicit inspiration communities for the group to look to. He asked attendees to give the team a list of locations they should research in order to bring popular elements of those communities to Tullahoma. Some of the communities listed included the West Haven neighborhood of Nashville, Columbia and Watertown, all in the Volunteer State, as well as out-of-state ideas. Some farther communities mentioned were Peachtree City, Georgia; Easton and Frederick, Maryland; Paducah, Kentucky; and McKinney, Texas, a suburb of Dallas.

Afterwards, Walker told The News he was encouraged and impressed with the number of people who attended the kickoff meeting.

“This is probably one of the biggest crowds I’ve seen show up for something like this for a community of this size in a long time,” he said. “I thought it was great. Got a lot of positive input.”

More meetings with various community stakeholders and citizens will be scheduled throughout the year in the four different quadrants of the city, according to City Planner Mary Samaniego. She echoed Walker’s comments about the turnout.

“Tonight’s meeting had a great turnout; there was a lot of positive responses,” she said. “I think the community’s going to be really engaged in the process.

She added that her department and other city officials were going into the comprehensive development plan process without any preconceived notions and wanted to fully embrace citizen feedback and commentary for the planning process.

“We want the public to provide as much input as they can,” she said.

Walker said he was encouraged by the comments and opinions offered throughout the evening, though the group was far from thinking about solutions just yet.

“It’s great to hear what people have to say,” he said. “I thought it was really good insight.”

Walker added that his group will be having more town-hall-style meetings and gather more data before having a deep, multi-day public engagement charrette, which he said would take place in the fall.

Samaniego said updates on when the next meeting will take place will be available online at thinktullahoma2040.com.

Given the recent "cold" snap, have you turned on your heat yet?