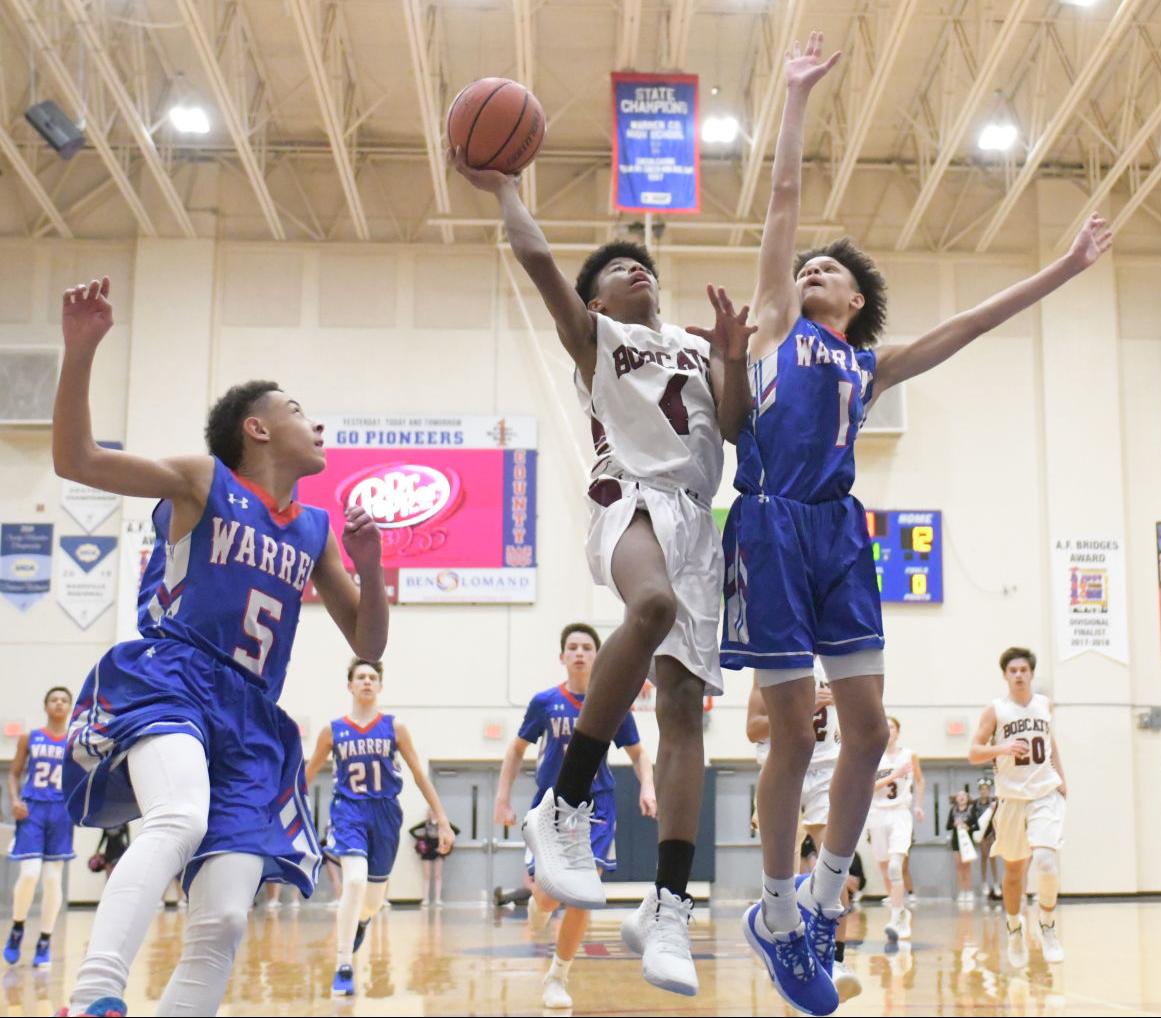 DeAndre Jenkins puts up a shot in the first quarter against Warren County on Friday. Jenkins knocked down a pair of late free throws to help the West boys basketball team win the CTC Title. 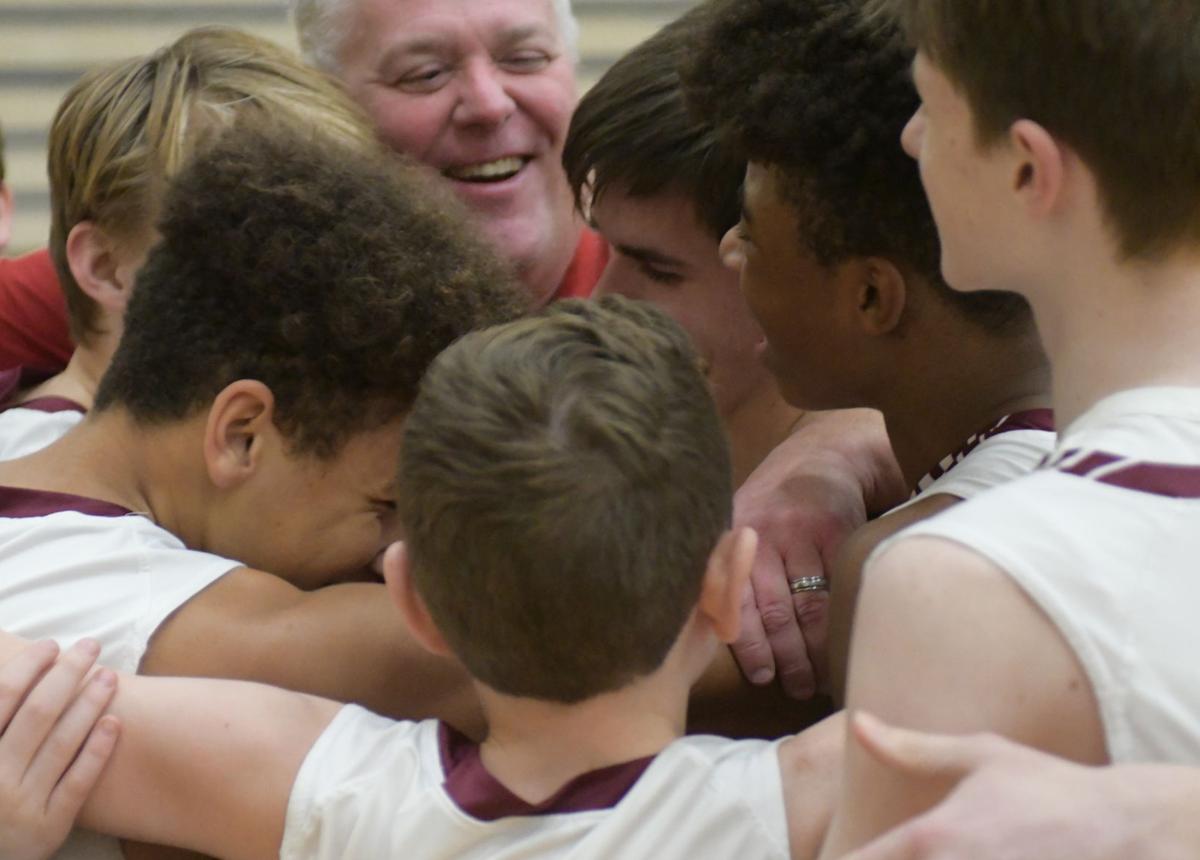 The West Middle School boys basketball team huddles to give its head coach Frank Cole a hug on Friday after the Bobcats won the CTC Title.

With 8.2 seconds left on the clock and the game tied at 28, West guard DeAndre Jenkins was fouled going up for a shot against Warren County in the Central Tennessee Conference Championship Game in McMinnville on Friday.

Jenkins was able to knock down both free throw attempts and the Bobcats forced a turnover on the opposite end, securing the CTC Title with a 30-28 victory. This is the second time in three years that the West Middle School boys’ basketball team has captured the conference championship. The Bobcats previously won the title in 2018.

“Well, we really preach culture in our character,” said West Head Coach Frank Cole. “We work on it every day and talk about it all the time. I don’t think that we played our best and our culture and our character really showed tonight. I’m proud of these guys.

“These guys finished the year 19-3, are the CTC regular-season champions and now tournament champions. We only had three losses which were by a combined five points. I don’t know how many teams in Tullahoma Middle School basketball history have had better seasons than these guys. I’m just so proud of them.

While Friday’s game ended up coming down to the wire, it didn’t start that way, as West gained control of the matchup early. Lashawn Kimmons knocked down a 3-pointer to start the game for the Bobcats, but Warren County answered on the other end to make it a 3-2 ballgame.

West dominated the remainder of the opening period, even going on an 11-2 run to take a 14-4 advantage with 12 seconds left in the first quarter. Evan Tomlin netted five points during that stretch for the Bobcats, while Jenkins added four points.

Warren County added a late basket as time expired in the first quarter, cutting the score to 14-6 heading into the second period. The Pioneers surrendered just four points in the second quarter, and was able to cut its deficit down to 18-16 at halftime.

Out of the break, Tomlin connected for the first points of the third quarter to give West a 20-16 advantage. Jenkins later added a basket with 2:12 left in the third period, to give the Bobcats a 22-18 lead.

Warren County countered with back-to-back baskets to even the score at 22 with 1:34 left in the third quarter. Just before the period ended, Xavier Farrell put up a layup to give West a 24-22 lead heading into the fourth quarter.

Tomlin scored the first points of the final period, knocking down an early basket, to extend the Bobcats’ lead to 26-22. Again, Warren County answered back with a pair of scores, evening the game at 26 with 2:28 left on the clock.

Less than a minute later, the Bobcats grabbed the lead again, as Tomlin scored to make it a 28-26 matchup with 1:37 remaining in the final period. Once again, Warren County answered, evening the score at 28.

Each team had opportunities to score, but they weren’t able to connect on a field goal. Late in the game, West set up for one final possession. With 10 seconds remaining in the contest, Jenkins drove to the basket, but was fouled on the same play, as he headed to the free-throw line to hit the eventual game-winning shots.

“DeAndre’s a special guy to be a seventh-grader who can go out there and do that,” Cole said. “You have to remember that. I think the best is yet to come with him. But yeah, it’s certainly a luxury that I have and that West basketball will have next year.”

Tomlin led the Bobcats in scoring on the night, after he put up 11 points in the victory. Jenkins also finished with double figures, as he put up 10 points.

Grant Chadwick added four points for West, while Kimmons scored three points. Farrell rounded out the scoring for the Bobcats with two points.