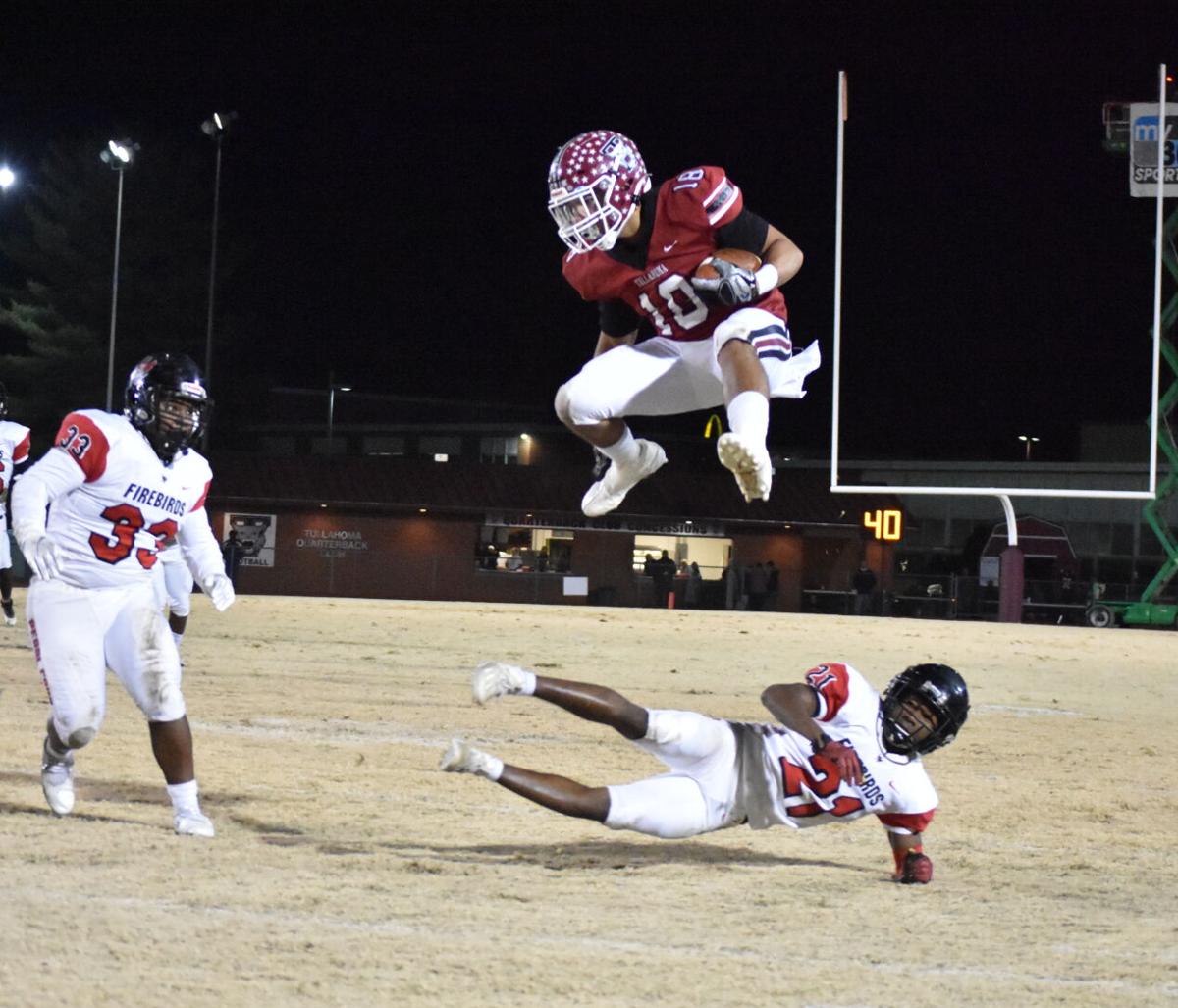 KeiShawn Cummings leaps over a Firebird defense to gain 20 yards to put the Wildcats in scoring position on Tullahoma’s way to a 21-7 state playoff quarterfinal victory Friday night. 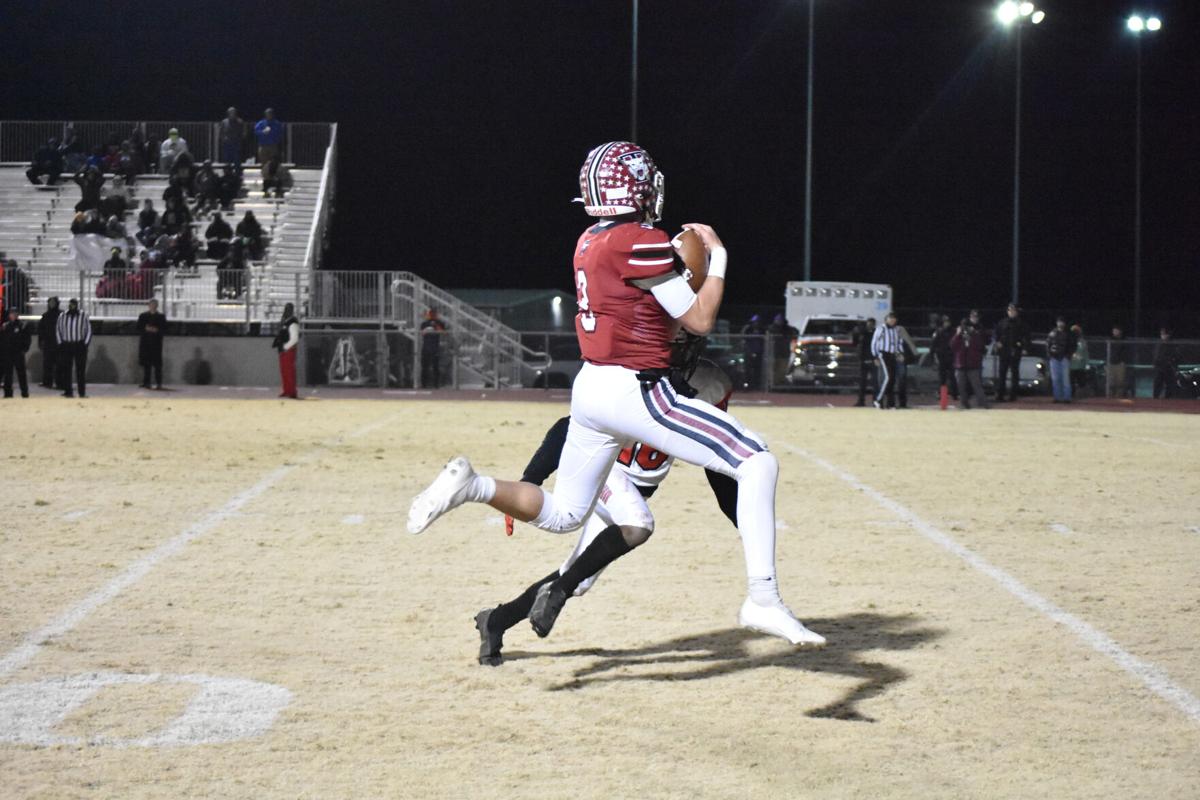 Joe Duncan catches a throw from Ryan Scott to put the Wildcats in scoring position. 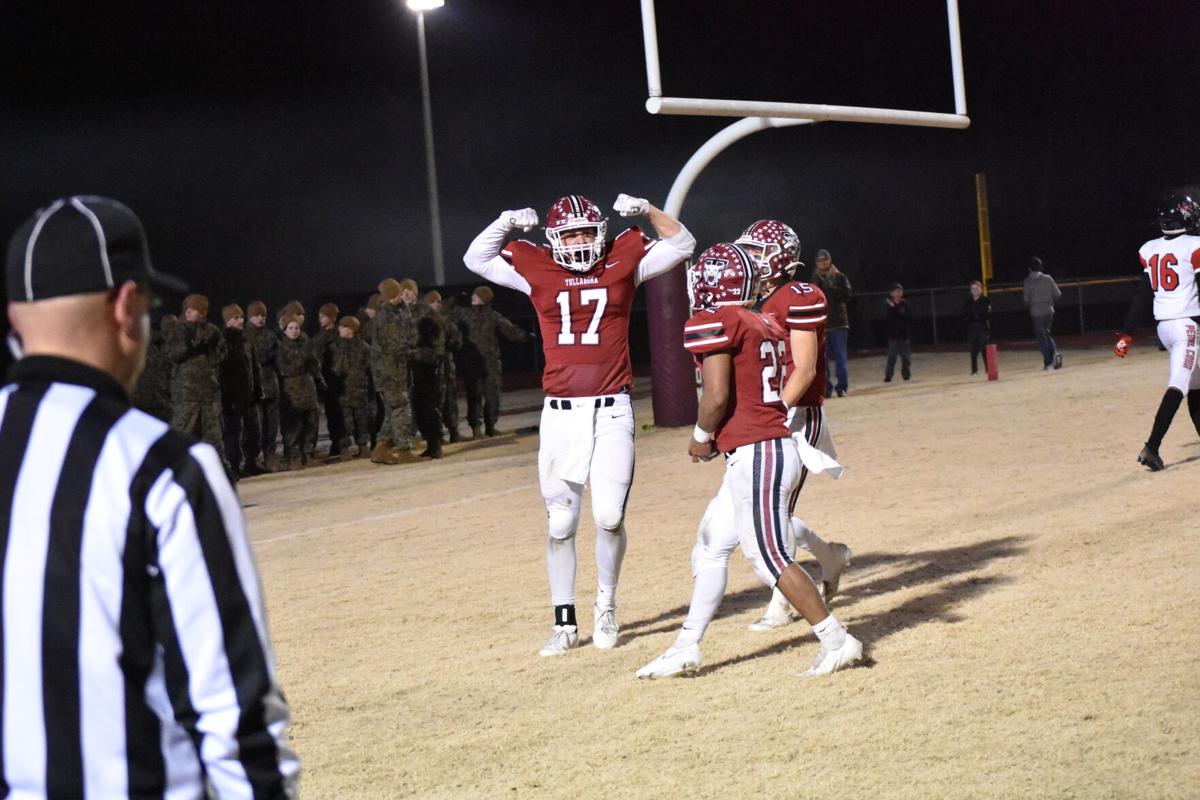 Brody Melton flexes after he seals the deal with a Tullahoma touchdown to put the Wildcats ahead 21-7. 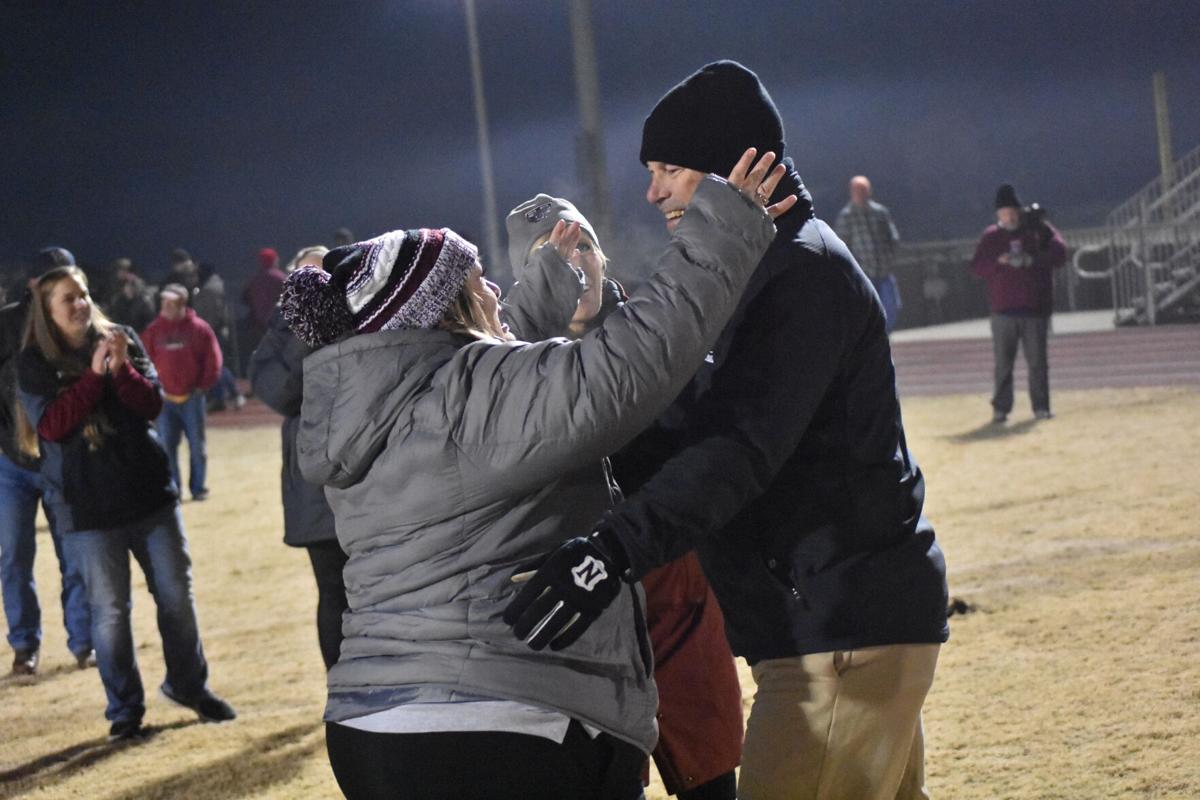 Head Coach John Olive hugs his wife who is in tears after the historic win.

KeiShawn Cummings leaps over a Firebird defense to gain 20 yards to put the Wildcats in scoring position on Tullahoma’s way to a 21-7 state playoff quarterfinal victory Friday night.

Joe Duncan catches a throw from Ryan Scott to put the Wildcats in scoring position.

Brody Melton flexes after he seals the deal with a Tullahoma touchdown to put the Wildcats ahead 21-7.

Head Coach John Olive hugs his wife who is in tears after the historic win.

The Tullahoma Wildcats pulled off a show stopping win Friday night as they beat the Pearl-Cohn Firebirds 21-7 in come from behind fashion, punching their ticket to the state semifinals.

During a scoreless first quarter, the Wildcats were only able to put together one first down and were stopped by the Firebird’s defense. However, while the offense struggled to find its footing, the Wildcat defense was able to hold the Firebirds and keep them away from the end zone.

The Firebirds were the first to strike following nearly a full half of scoreless ball when they found the end zone with a little over four minutes left in the second quarter. The Firebirds’ Jayden Robinson broke through the Tullahoma defense for a 29 yard touchdown. The extra point was successful to give Pearl-Cohn a 7-0 advantage going into the locker room.

Pearl-Cohn received the ball at the beginning of the second half. The Wildcat defense was there to stop them in their tracks when Owen Stroop recovered a fumble at the Pearl-Cohn 31-yard line. After a short series by the Tullahoma offense, Justus Chadwick tried for a field goal, but came up just short.

The Wildcats had not given up. Undeterred, the Wildcat defense halted Pearl-Cohn’s advance on their next possession and forced a punt. Quarterback Ryan Scott’s offense took over at the Pearl-Cohn 44-yard line. With a long pass to Jacob Dixon, the Wildcats got a first down at the Pearl-Cohn 29-yard line. Scott looked down the field to find Joe Duncan, and the crowd went wild as Duncan got the Wildcats to the 2-yard line. Scott called his own number the next snap and pushed his way into the end zone with the help of his linemen to put the Wildcats on the board. Justus Chadwick booted the ball through the uprights for the extra point to tie the game.

The score prompted the student section to release a volley from their confetti cannons as the Wildcats were back in the game with a minute left in the third quarter.

With a flag on the kickoff, the Firebirds had the ball at their own 9-yard line. The Wildcat defense held their guests once again.

After another defensive stand, the Wildcats took over at the Pearl-Cohn 43-yard line. Scott found Cummings with a swing pass and Cummings hurdleded a Firebird defender to gain 20 yards. Scott sealed the deal with a pass to Brody Melton. Melton took the ball to the end zone for a 26 yard touchdown. Justus Chadwick topped Melton’s touchdown off with an extra point. With less than four minutes left in the fourth quarter, the Wildcats lead the game 21-7.

The Wildcat defense put the game to bed late in the fourth. Krys Uselton intercepted the pigskin at the Pearl-Cohn 9-yard line. The Wildcats shook hands with the Firebirds and celebrated the historic win.

The win was the second victory over Tullahoma’s Region 5-4A opponent this season. The ‘Cats nipped the Firebirds 24-21 during their regular season meeting and accounted for the only two blemishes on the Nashville school’s record this season. Pearl-Cohn advanced to play the ‘Cats by beating the formerly undefeated Hardin County 31-21 last week.

Meanwhile, as second-ranked Tullahoma was taking care of business on the gridiron, the state’s number-one team was being beaten as formerly undefeated Greeneville was knocked out of the playoffs by two-time defending 4A champion Elizabethton which had been crushed during the regular season by Greeneville. They will face the Upperman Bees in the other side of the playoff bracket.

The Wildcats have only made it to the fourth round of playoffs twice in program history. The Wildcats made a Sub State appearance in 1987, but have not made it that far since. The Wildcats will play host to the undefeated Haywood Tomcats after they beat South Gipson in their quarterfinal match up last Friday. Game time is set for 7 p.m. Friday with the winner to head to Chattanooga to play for the state championship against the winner of the Elizabethton versus Upperman game. Tickets are available on GoFan.co and at the gate. T-TOWN Tailgate will take place prior to the game.