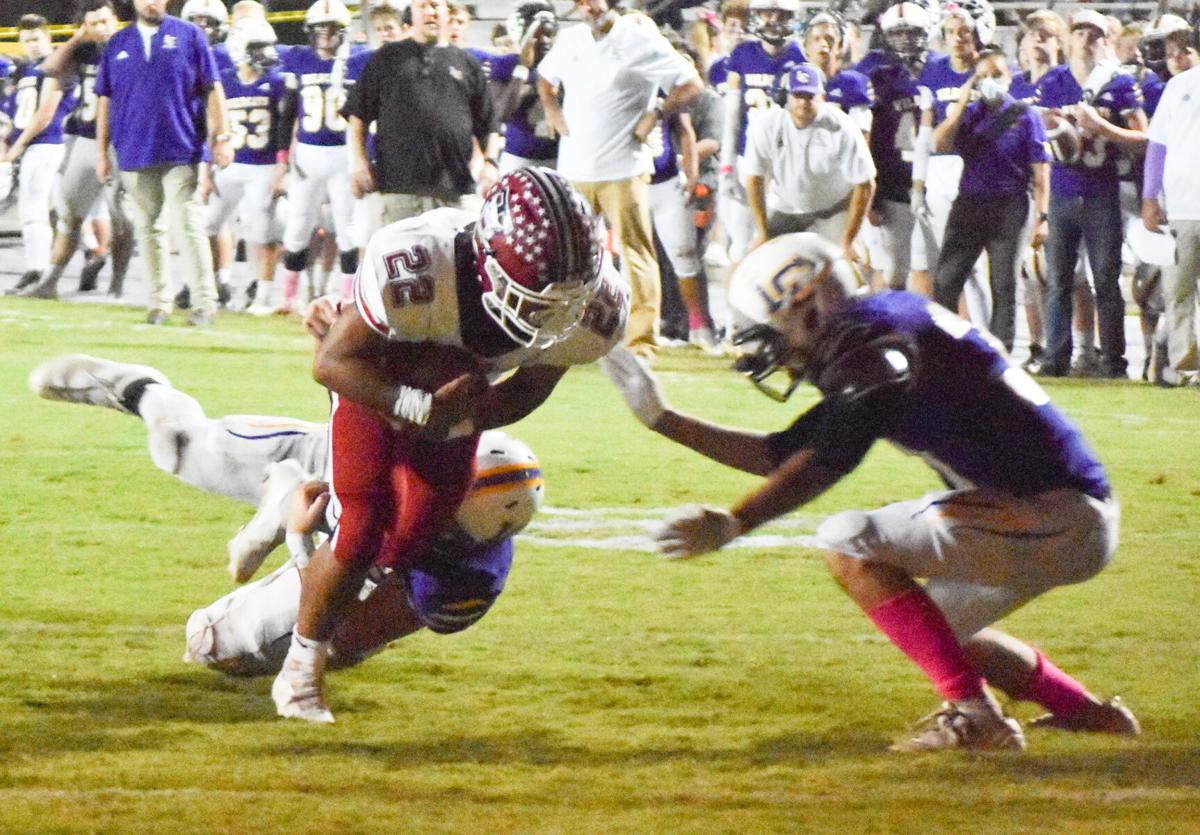 Jaxon Sheffield breaks through the Lawrence County defense to score a touchdown. 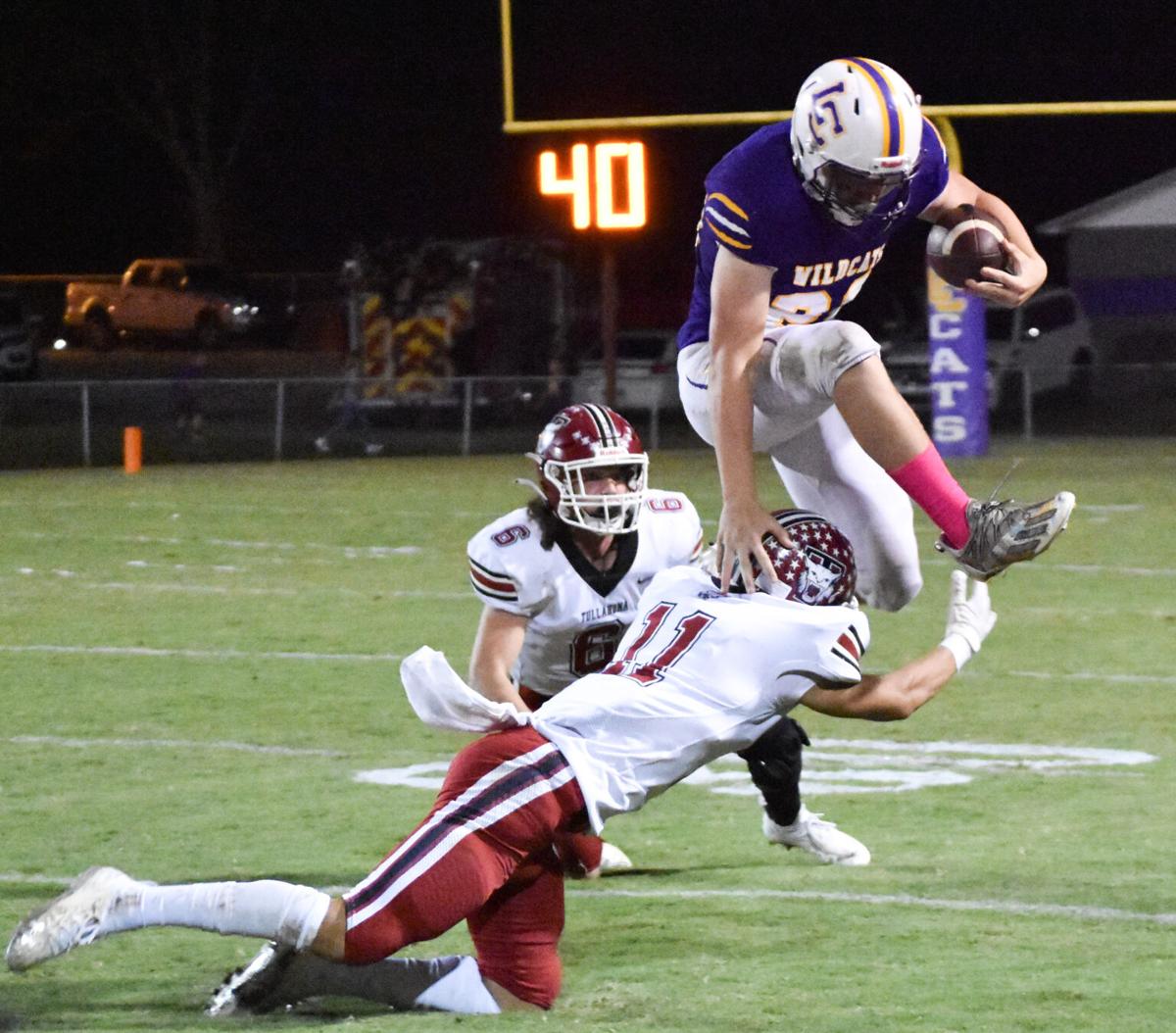 A Lawrence County running back leaps over a Tullahoma defender during Friday night’s game. 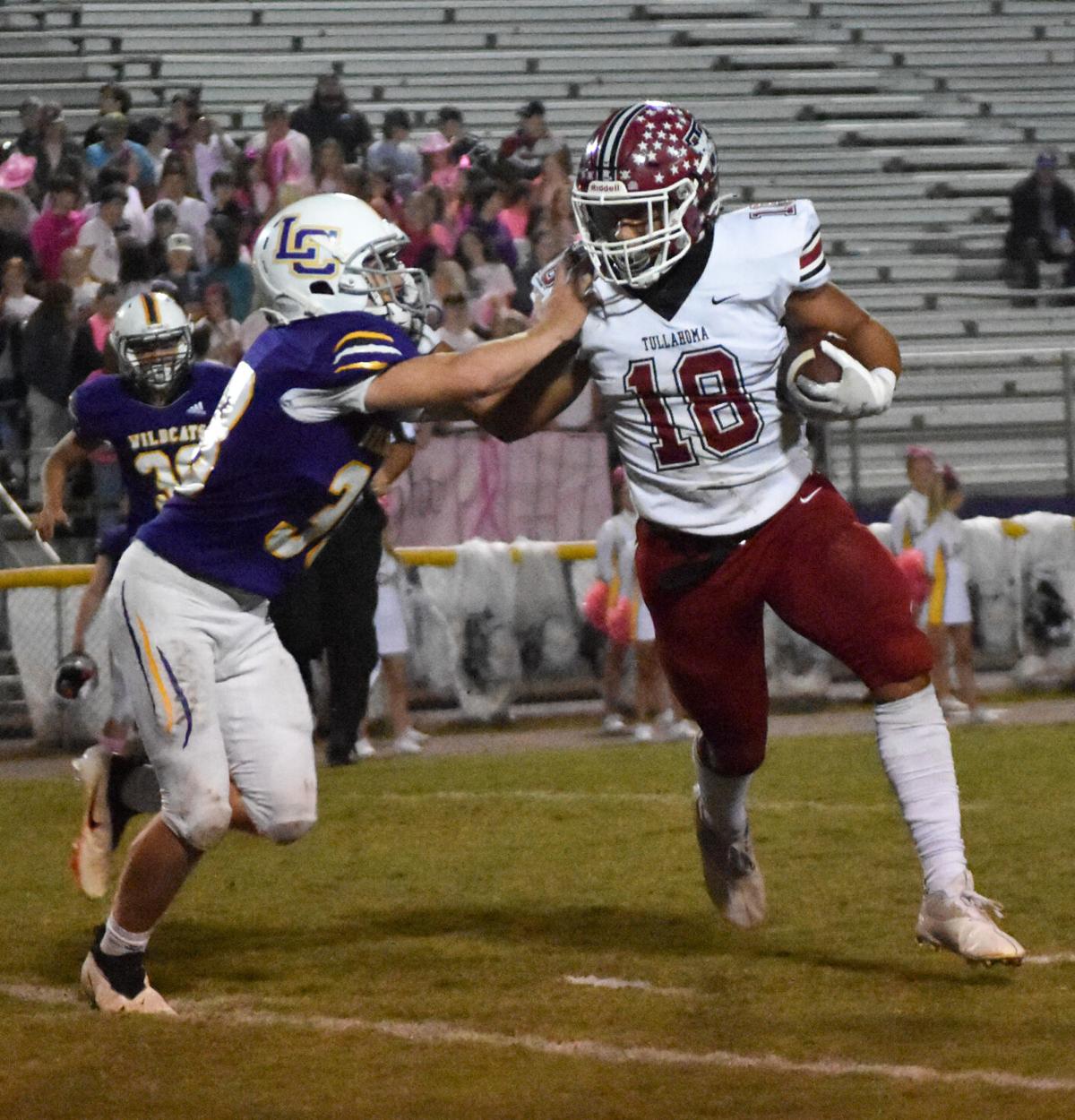 KeiShawn Cummings fights off a Lawrence County defender as he rushes the ball.

Jaxon Sheffield breaks through the Lawrence County defense to score a touchdown.

KeiShawn Cummings fights off a Lawrence County defender as he rushes the ball.

During the first quarter, the Wildcats traded early blows until Tullahoma was able to break through the Lawrenceburg defense. Quarterback Ryan Scott launched the football to KeiShawn Cummings for a 34-yard touchdown to get the scoring underway. Justus Chadwick was able to work his magic and earn the Wildcats a PAT to bring the game to 7-0.

Landon Foutch was a key player on the Tullahoma defense Friday night and started off the second quarter with an interception at the Tullahoma 10-yard line. Jaxon Sheffield, Cummings and Scott were able to work together move to the pigskin to the Lawrence County side of the field. Sheffield pushed his way through the Wildcats defense to score the second Tullahoma touchdown. Chadwick topped Sheffield’s touchdown off with a PAT to make it 14-0 in the second quarter.

The Tullahoma offense was still on a roll. Scott worked his way down the field again. Scott looked down the field for Jacob Dixon to complete a 31-yard touchdown pass. Chadwick was successful with his PAT attempt to give the Tullahoma Wildcats a 21-0 lead.

After the touchdown, Chadwick was set back at the Tullahoma 25-yard line for his kickoff due to a personal foul on Tullahoma. However, the five-star kicker was still able to put the ball in the end zone for a touchback. Chadwick was named Kohl's National Player of the Week.

Joe Duncan was able to stop the Lawrence County Wildcats from scoring right before halftime when he intercepted the ball at the Tullahoma 3-yard line and ran it back for a touchdown. Duncan’s touchdown was called back for a blindside block with no time left on the clock.

Foutch got his hands on the ball again during the third quarter when he intercepted the ball at the Lawrence County 13-yard line.

Jaxon Sheffield broke through the Lawrence County defense to score a 4-yard touchdown to cash in on the turnover. Chadwick topped Sheffield’s touchdown off to bring the Wildcats to a 35-0 lead.

Tullahoma will take on the Greenbrier Bobcats next Friday Oct. 22. Kickoff is set for 7 p.m. at Wilkins Stadium.