You are the owner of this article.
Edit Article Add New Article
You have permission to edit this article.
Edit
Home
News
Sports
Living
Arts & Entertainment
Special Sections
Classifieds
Obituaries
The Job Network
1 of 5 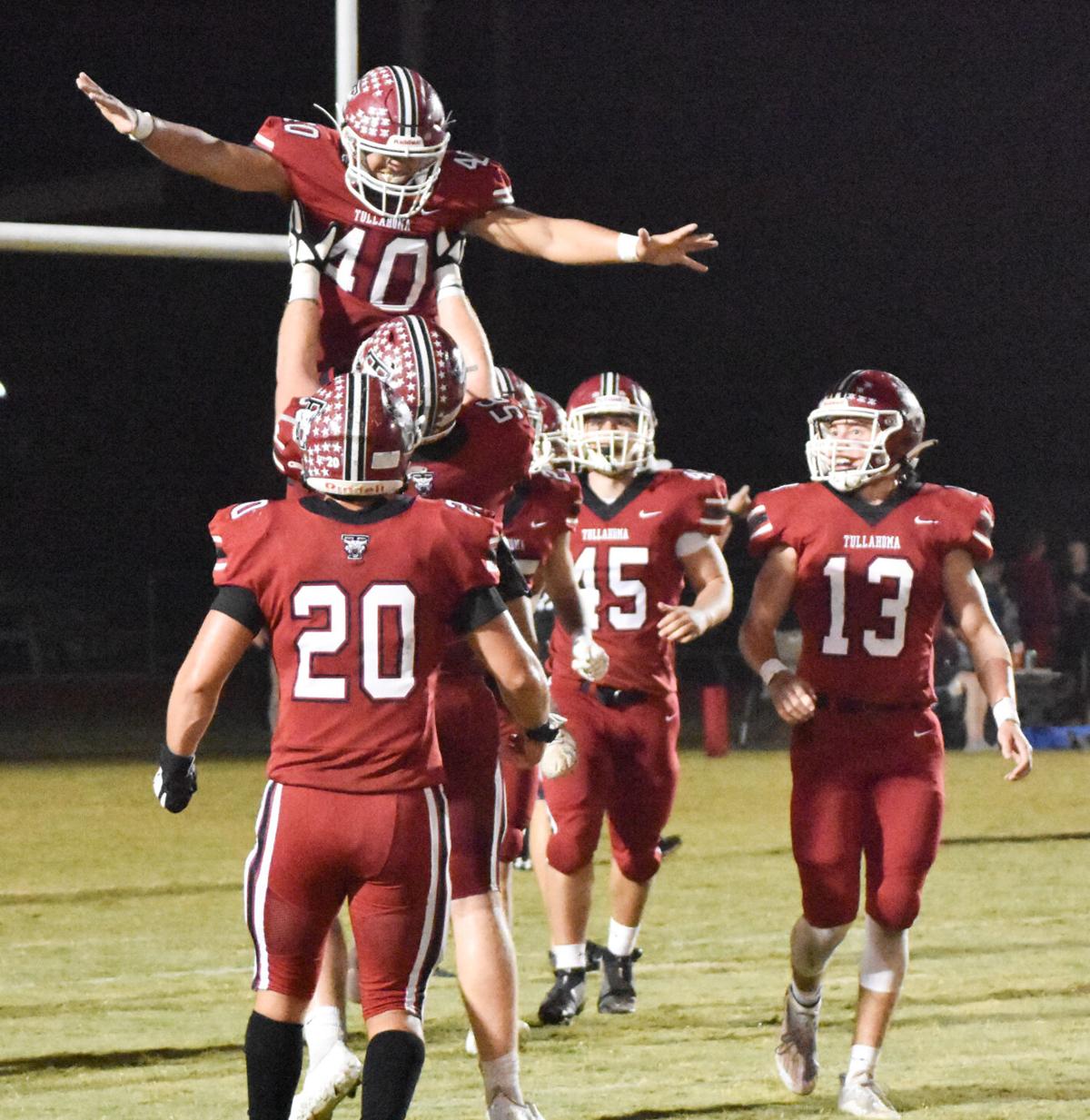 Tullahoma Wildcat Brandon Painter takes flight after scoring one of his squad’s touchdowns Friday night as the ‘Cats climbed to 7-0 with a convincing 37-7 crushing of Montgomery Central. The win marks the third Top Ten team Tullahoma has beaten this year and puts the ‘Cats firmly at the top of their region with the playoffs looming. 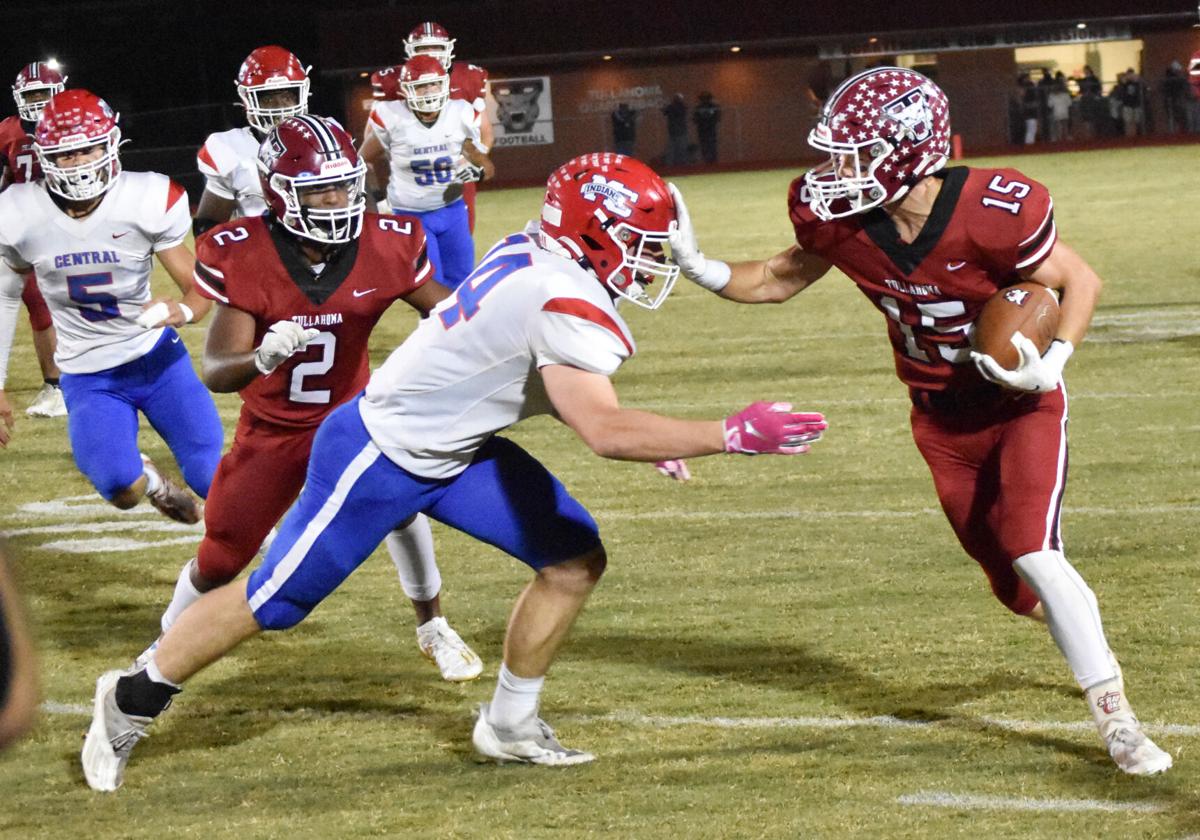 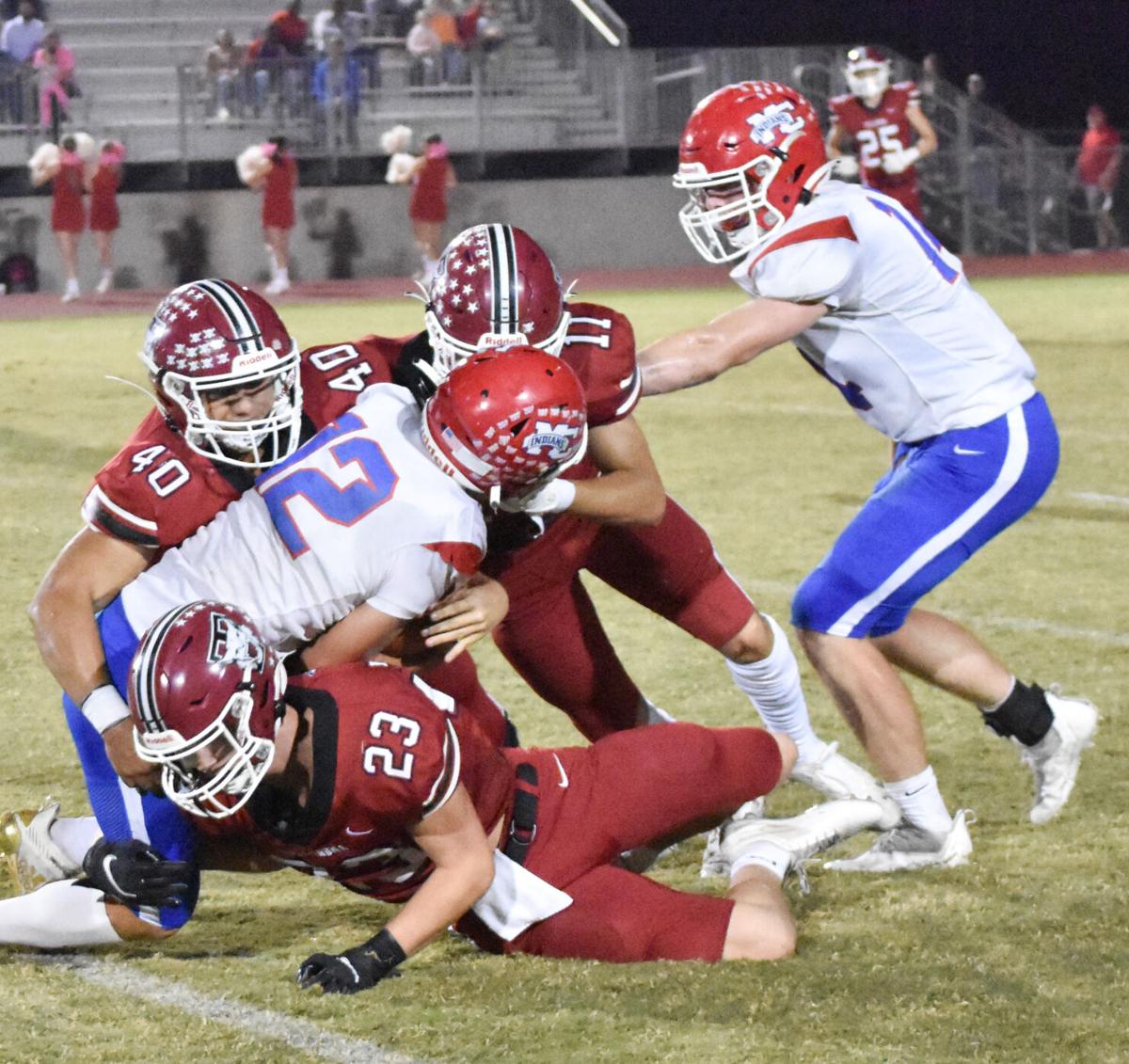 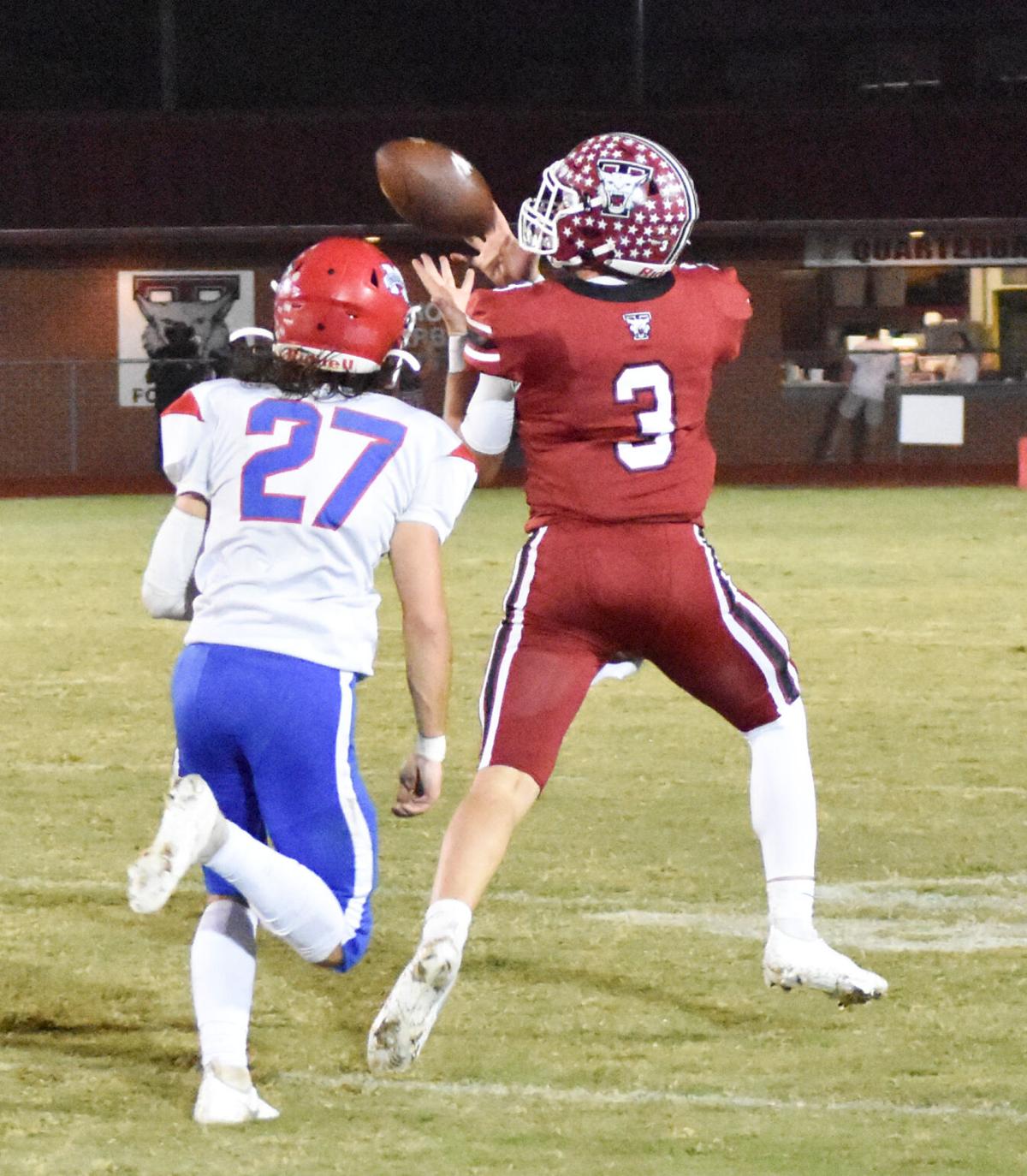 Joe Duncan catches a pass from Ryan Scott to get a Tullahoma first down. 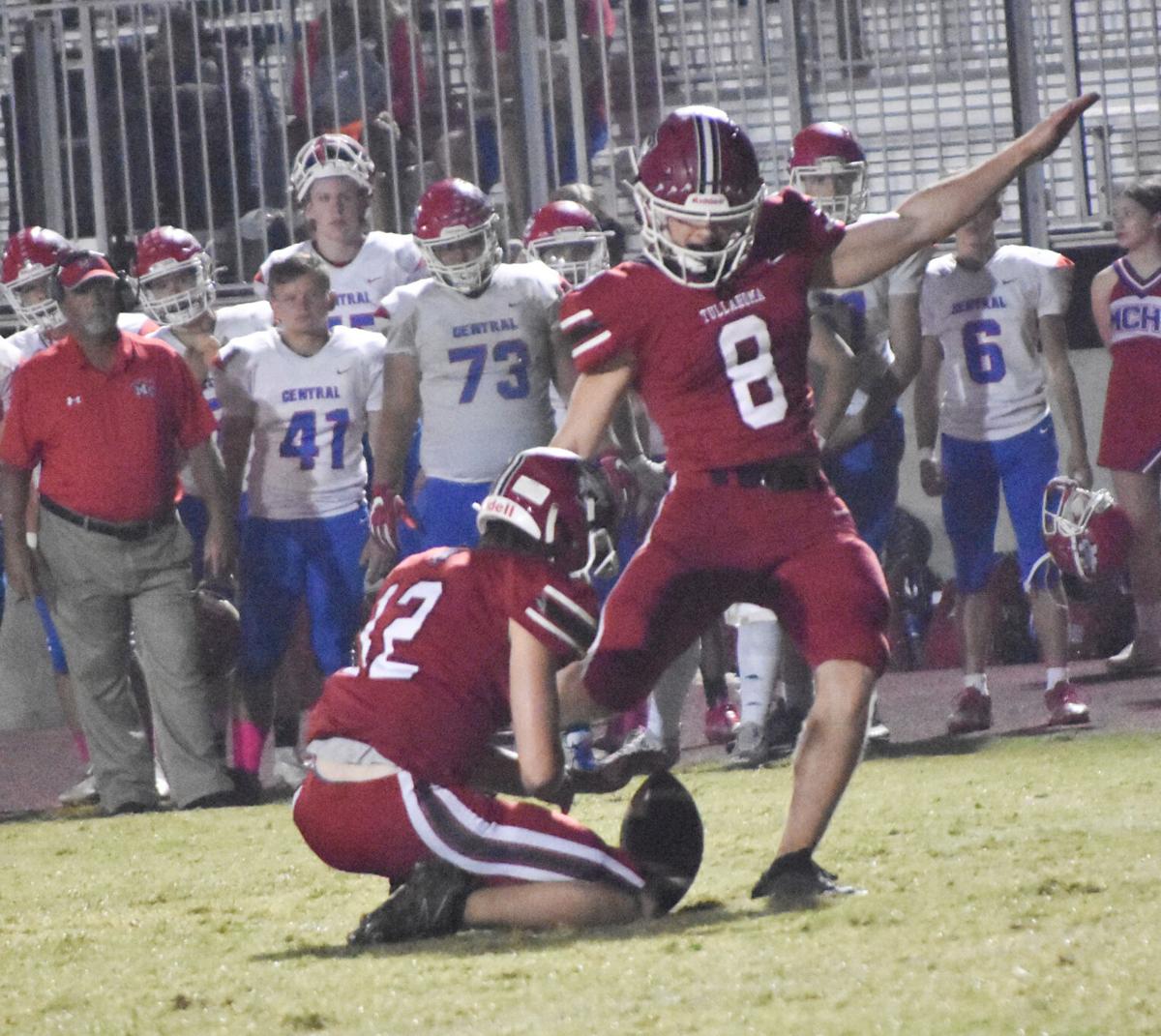 Tullahoma Wildcat Brandon Painter takes flight after scoring one of his squad’s touchdowns Friday night as the ‘Cats climbed to 7-0 with a convincing 37-7 crushing of Montgomery Central. The win marks the third Top Ten team Tullahoma has beaten this year and puts the ‘Cats firmly at the top of their region with the playoffs looming.

Joe Duncan catches a pass from Ryan Scott to get a Tullahoma first down.

The Tullahoma Wildcats continued their unbeaten start to the season Friday night, going 7-0 after hammering formerly unbeaten region foe Montgomery Central 37-7. The Wildcats remain ranked second in the state after beating their third top 10 team of the season, the win kicking the door wide open to claiming the region championship for the second year in a row.

While Montgomery Central Indians took it on the chin Friday night, they were able to reach the end zone first after the Wildcats started the game off on the wrong foot. With a fumble on the starting kickoff, the Wildcats defense was put on a short field. Mason Cunningham was able to recover the ball for the Indians at the Tullahoma 12-yard line. Indian quarterback Logan Sykes pushed through the Wildcat defense to score the first and only touchdown of the night for the visitors. The point after touchdown was successful to bring the Indians ahead 7-0.

The Wildcats answered back fast when KeiShawn Cummings plowed through the Indian defense to score a 29-yard touchdown. Justus Chadwick topped Cummings’ touchdown off with a PAT to tie up the game.

Justus Chadwick had a gold boot on Friday night, driving three field goals through the uprights for the Wildcats. Chadwick kicked a 37-yard field goal to put the Wildcats ahead 10-7 with three minutes left in the second quarter.

The Tullahoma defense then forced an Indian miscue when Owen Stroop snagged the ball at the Montgomery Central 20 yard line, giving the Wildcat offense the chance to score. Quarterback Ryan Scott and the Wildcat offense did not pass up their chance. Scott launched the ball to Jacob Dixon for a 35-yard touchdown. Chadwick had another successful PAT to put the Wildcats ahead 17-7 at halftime.

Five star kicker Justus Chadwick started the scoring off in the second half by splitting the uprights to put the hosts up 20-7.

The Wildcats were still thirsty for more. Krystopher Uselton picked off the football and returned it to the end zone for a 45-yard pick six. Chadwick booted the ball again to give the Wildcats a 27-7 lead with one minute left in the third quarter.

Chadwick followed that up with another Tullahoma field goal to increase the Wildcat lead over the Indians to 30-7.

Safety Jacob Dixon was still hungry for more. Dixon forced a fumble that was recovered by linebacker Brandon Painter. Painter ran the ball back to the end zone for a Tullahoma scoop and score. Chadwick finished it off with a PAT. The Wildcats wrapped up the game with a 37-7 victory.

“It’s the first time in my career for that to happen to get three wins over three top ten teams in a regular season, and in this situation all three teams were undefeated until they played us,” Head Coach John Olive said after the victory.

For Montgomery Central, it was their first taste of defeat this season although the formerly seventh-ranked Indians will now be forced to play the meat of their region schedule as they have to meet both fourth-ranked Pearl-Cohn and eighth-ranked Marshall County. In other regional action, Pearl-Cohn spanked Marshall County 37-15. Tullahoma has beaten all three of the region contenders meaning should the Wildcats hold course and win their remaining region games, they will be crowned region champions for the second year in a row and confirm at least two home playoff games provided they win their opening round.

While the road to reap the region crown appears to be wide open for the Wildcats, the squad is yet to even claim a playoff spot in Region 5 of Class 4A. That could be done, according how the other region tilts turn out, with a win over Lawrence County this Friday night. The Tullahoma Wildcats will take on the Lawrence County Wildcats this Friday in Lawrence County. Kickoff is set for 7 p.m.