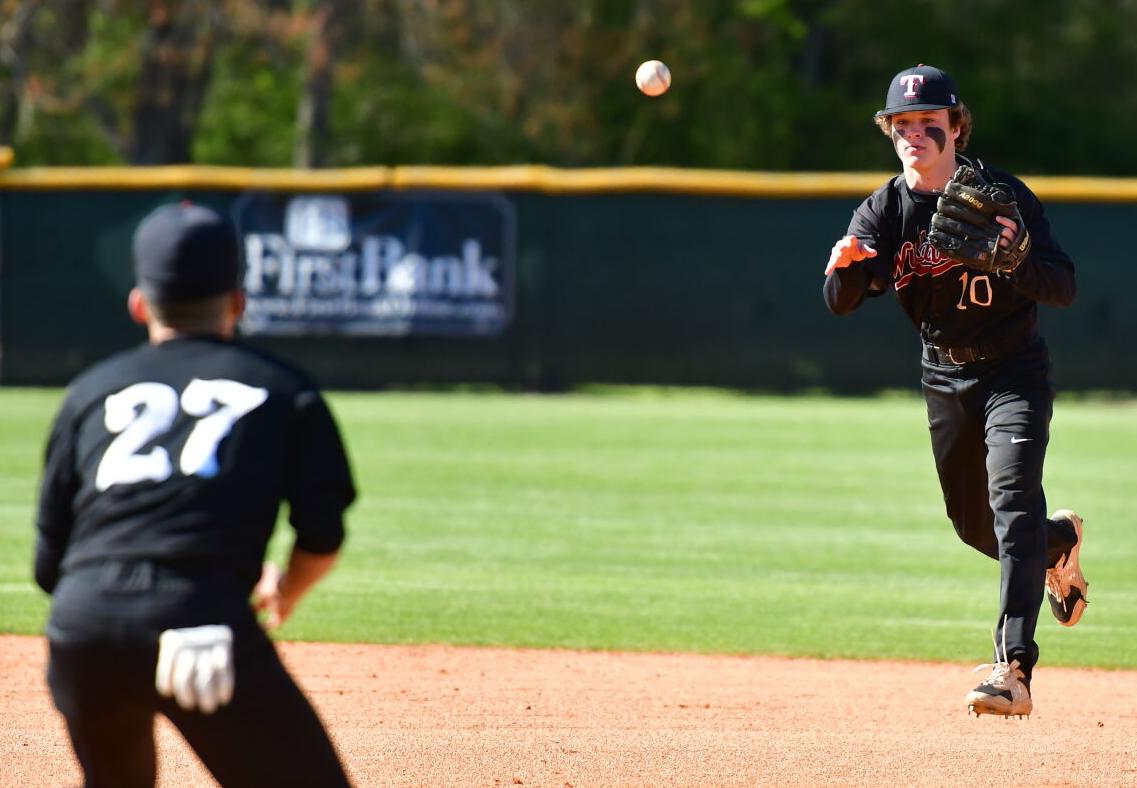 Tullahoma’s Jacob Dixon leaps to throw a ball over to first baseman Jayron Morris against Rockvale on Friday. After leading 5-1, the Wildcats weren’t able to hold on for the victory as the Rockets scored seven runs in the final inning to notch the 8-5 victory. 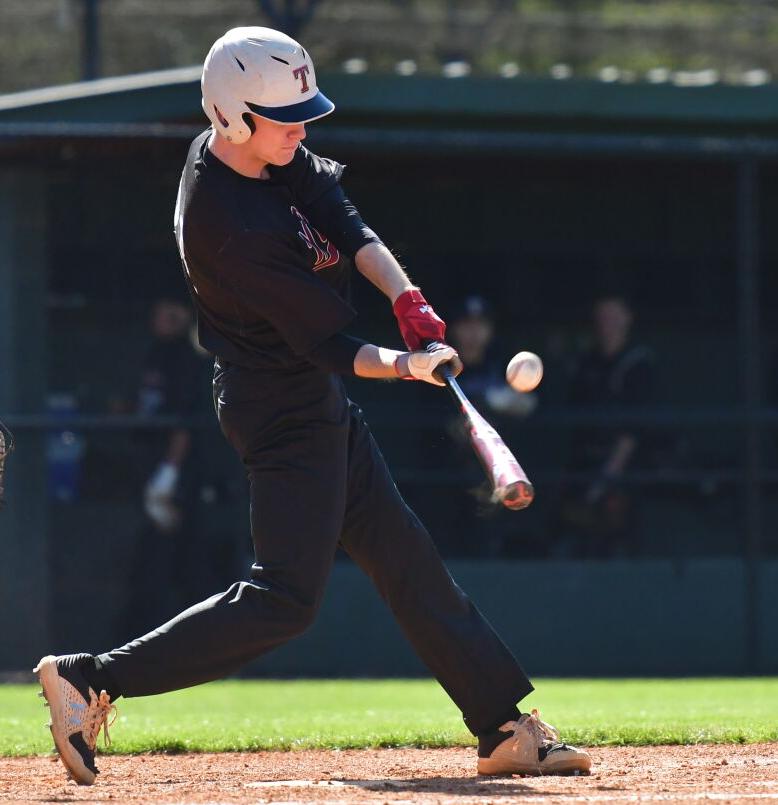 DJ Dillehay hits an RBI double against Rockvale on Friday.

After defeating Franklin County in back-to-back games last week, Tullahoma struggled during its weekend series and lost three-of-four home games to drop to 8-5 on the regular season.

The Wildcats opened up their round robin tournament with an 8-6 loss to Stewarts Creek Thursday night. Tullahoma then fell to Rockvale in the first game of a doubleheader Friday. The Wildcats responded Friday evening with a 5-1 victory over Loretto. However, Tullahoma ended its weekend on a sour note, losing Saturday morning to Collierville 12-4.

During the first game of the weekend series, the Wildcats found themselves trailing 8-2 entering the bottom of the fifth inning. Tullahoma tried to chip away at that deficit, but only plated two runs in the fifth and sixth innings, before falling to Stewarts Creek 8-6.

DJ Dillehay helped start that comeback attempt by the Wildcats with his second home run of the season. After Wade Collins singled to start the frame, Dillehay homered to left field to cut the score down to 8-4.

Cayden Tucker and Cannon Emory drew walks in their at-bats to begin the bottom of the sixth inning. Both runners scored when Collins hit a two-run single into right field to cut the score down to 8-6.

Stewarts Creek ended the inning after getting James Sells to fly out to right field. Tullahoma would then go down in order in the bottom of the seventh inning as the Red Hawks sealed the victory.

Joseph Duncan got the start for the Wildcats and took the loss. In two innings, he allowed six runs, four of which were earned, two walks and five hits and he also struck out a batter.

Emory tossed the final five innings for Tullahoma and surrendered a pair of runs and a walk on three hits. He also struck out five batters.

Zachary Lawson got the win for Stewarts Creek and in five innings he allowed four runs on two walks and six hits and he struck out a pair of batters. Nick Kempt tossed the final two innings for the Red Hawks and allowed two runs, two walks, a hit and he struck out a batter.

Tullahoma grabbed a 5-1 lead after four innings against Rockvale. However, a nightmare seventh inning got away from the Wildcats as the Rockets plated seven runs to grab an 8-5 advantage.

With two outs in the bottom of the seventh inning, Jacob Dixon drew a walk to try to help Tullahoma battle back. However, Rockvale was able to get out of the frame unscathed and held on for the victory.

Sells and Dillehay both drove in two runs for the Wildcats against Rockvale. Brody Melton and Jayron Morris both added an RBI for Tullahoma.

Dillehay got the start for the Wildcats in that contest and in 4.2 innings pitched, he allowed a run on two hits and a pair of walks. He also struck out seven batters.

Ragan Tomlin then tossed 1.2 innings for the Wildcats and allowed four runs, three of which were earned. He also surrendered three walks and a hit.

Evan Tomlin pitched the final .2 of an inning and took the loss for Tullahoma. He allowed three runs and walked three batters.

Bryce Floyd got the start for Rockvale and tossed three innings. He gave up three unearned runs, four hits and a walk while he additionally struck out two batters.

Jalen Morris threw an inning for the Rockets and allowed two runs and four walks. Nathan Aguilar tossed the final three innings for Rockvale and received the win. He allowed a run, a hit and five walks, while he additionally struck out a batter.

Tullahoma fell behind 1-0 in the top of the third inning in Friday’s nightcap against Loretto. However, the Wildcats went on to score three runs in the bottom of the frame to take the lead for good.

Dixon drew a walk to start the bottom of the third inning for Tullahoma and scored when Sells lined a double into center field to tie the game at 1. Melton delivered a two-out double that plated Sells. Melton shortly scored when Morris singled to make it a 3-1 ballgame.

Tullahoma added another run in the bottom of the fourth inning. Emory hit a one-out double and later scored when Dixon hit a sacrifice fly to center field to put the Wildcats up 4-1.

With two outs in the bottom of the sixth inning, Sells reached base after getting hit during his at-bat. Two pitches later, Sells crossed home plate after Dillehay hammered a triple into center field to make it a 5-1 contest.

Trenton Sholey pitched five innings and notched the win for the Wildcats. He allowed an unearned run, a walk, two hits and he additionally struck out five batters. Sells tossed the final two innings for Tullahoma and he struck out four of the six batters that he faced.

Caleb Davis took the loss for Loretto. In six innings he allowed five runs, four of which were earned on six hits and pair of walks. Davis also struck out seven batters.

Collierville grabbed the early lead with three runs in the top of the first inning. However, Tullahoma rallied and led 4-3 after four innings.

The Wildcat’s advantage didn’t last long as Collierville answered with nine runs in the final two innings to score the 12-4 victory.

Morris drove in two runs for Tullahoma in the loss and had two hits in his three at-bats. Sells and Jaden Eggleston each added an RBI for the Wildcats.

Camden Quick got the start for the Wildcats and allowed three unearned runs and five walks in his .2 of an inning of work. Avery Smith followed and pitched 4.1 innings for Tullahoma. He allowed two runs on four hits and a walk.

Colton Emory took the loss for the Wildcats and allowed seven unearned runs on four hits and a pair of walks. Eggleston then tossed the final inning and surrendered a hit and struck out two batters.

That series was scheduled to conclude in Tullahoma on Tuesday. However, as of press time, the result of that contest was unavailable. A full recap of the Lawrence County and Tullahoma series will be in Sunday’s issue of The Tullahoma News.

The Wildcats are then slated to travel to South Pittsburg on Thursday for an 8 p.m. contest. Tullahoma will then take part in a doubleheader at Sequatchie County Friday, first taking on Huntland at 5:30 p.m. and then host school Sequatchie County at 7:45 p.m.

Tullahoma will then travel to Marion County on Saturday for a 10 a.m. ballgame.