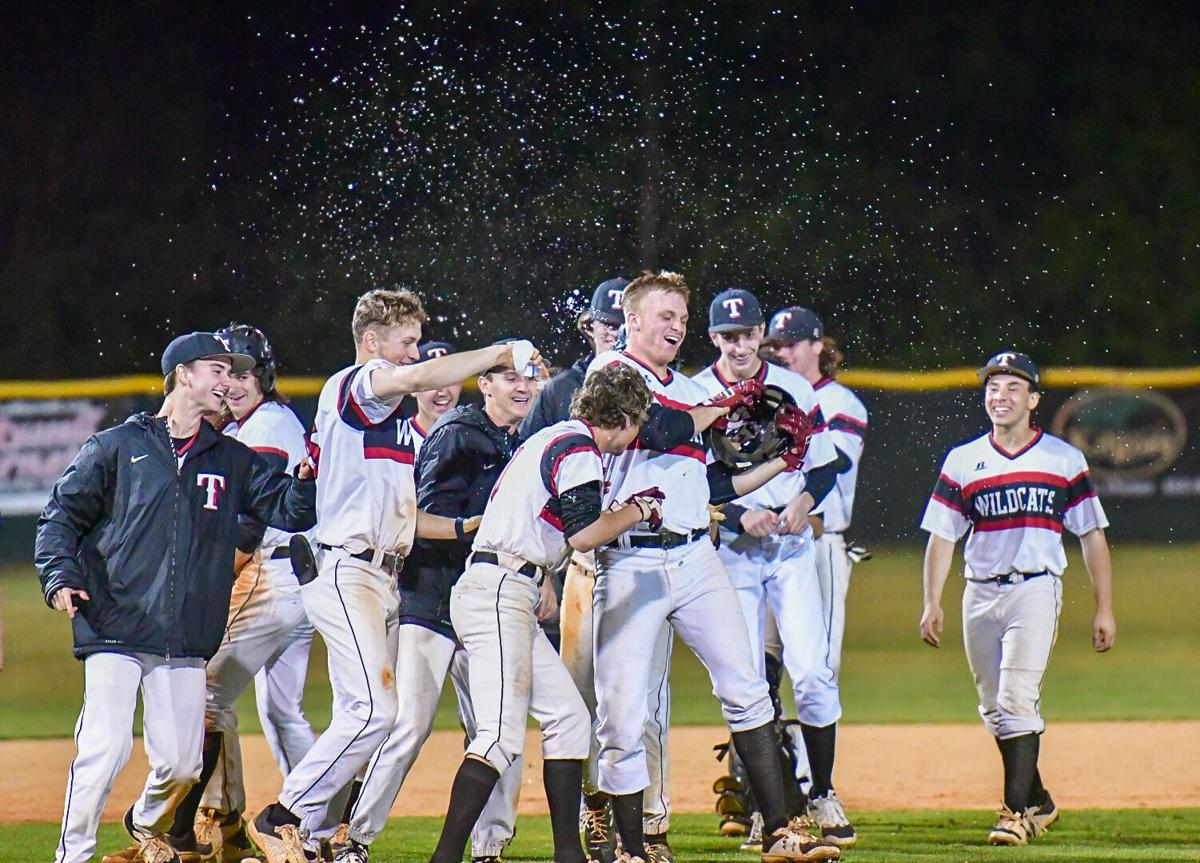 The Tullahoma High School baseball team celebrates and pours water on Jacob Dixon following a 14-13 win over Shelbyville. Dixon had the game-winning hit in the bottom of the eighth inning for the Wildcats as Tullahoma garnered the walk-off victory. 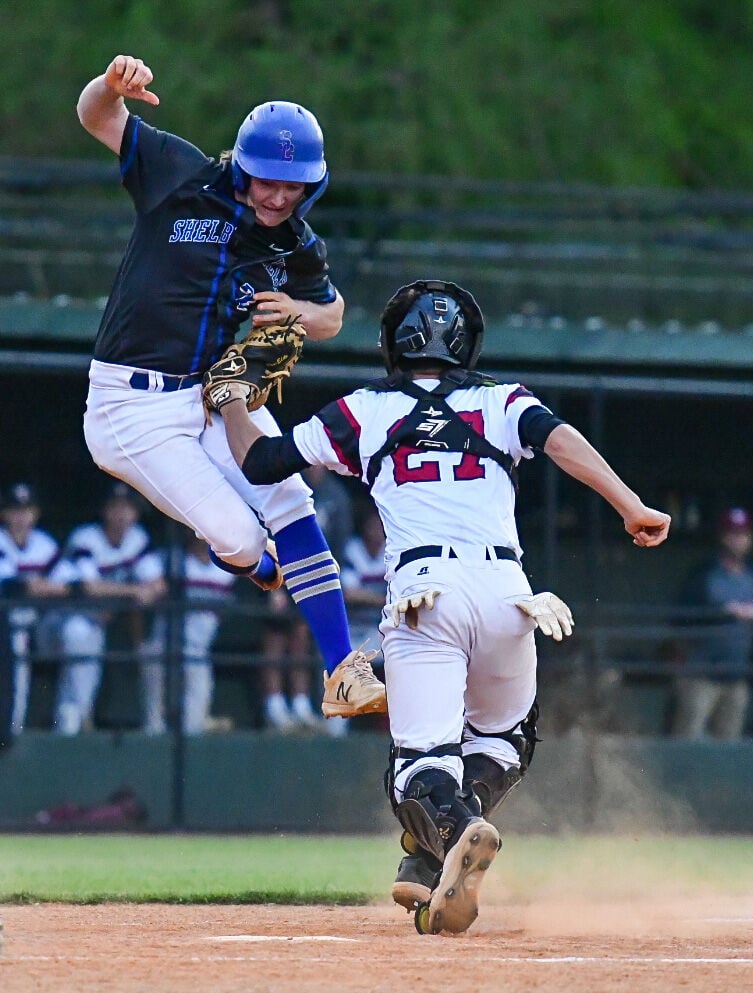 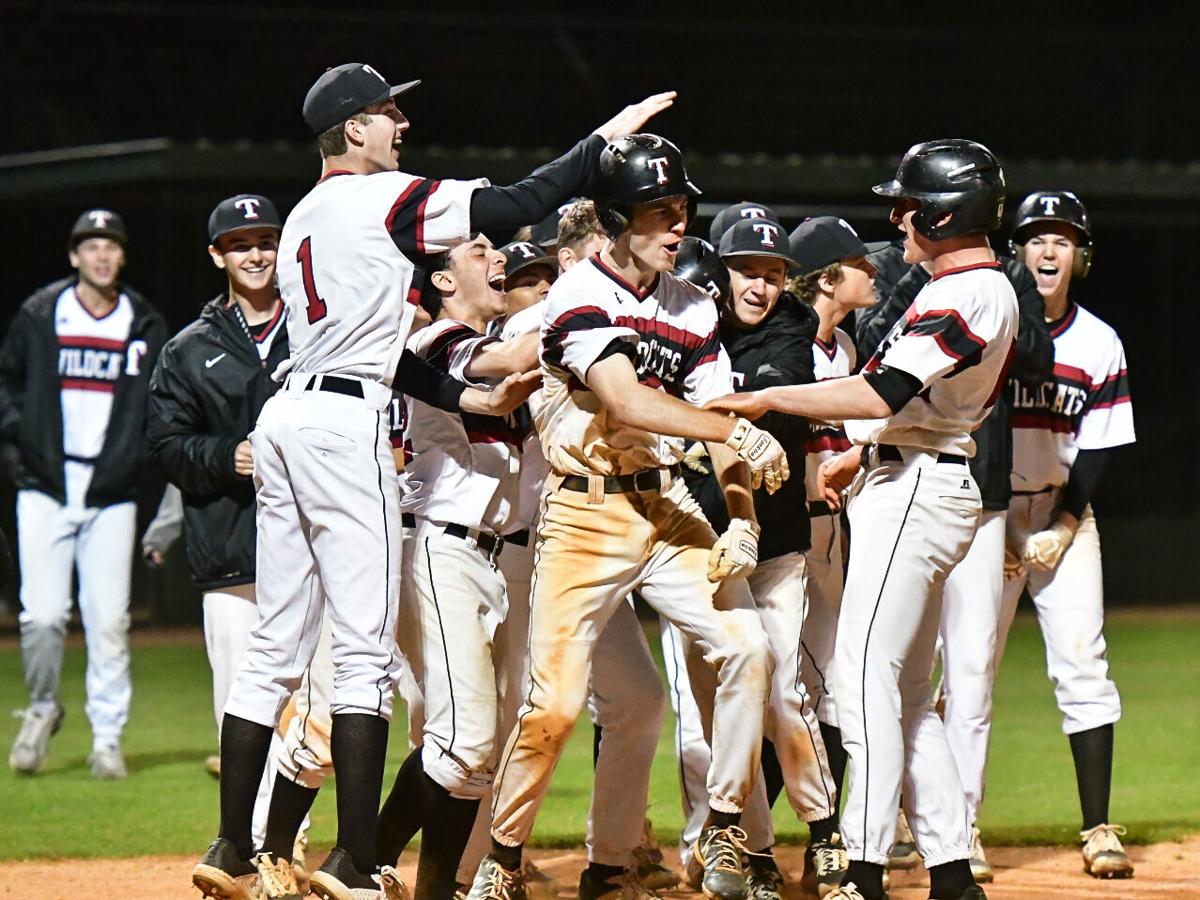 The Tullahoma players celebrate as DJ Dillehay hit a solo home run in the bottom of the seventh inning against Shelbyville on Tuesday. That homer was Dillehay's third home run of the season.

Jacob Dixon sent the Tullahoma crowd home happy Tuesday as the Wildcats won in walk-off style and captured a 14-13 extra-inning victory in order to sweep the season series with Shelbyville.

After holding the Golden Eagles scoreless in the top half of the eighth inning, Tullahoma secured the victory in the bottom half of the frame. With one out and a runner in second, Dixon lined a ground ball through the middle of the field for a single and allowed Evan Tomlin to plate the game-winning score.

“I just had to put the ball in play, that’s all I had to do to get that run in from second to home,” Dixon said. “Oh, it was the best feeling ever to pull this one out.”

Once Evan stepped on home plate, the Tullahoma bench erupted in celebration, as players met Dixon between second and third base and doused him with a bottle of water.

“I saw that water and ran because I didn’t feel like getting wet. It was a good feeling though,” Dixon said.

Tullahoma trailed for the majority of Tuesday night’s contest and fell behind 5-1 and 6-3, before it took a 9-6 lead in the fourth inning. That lead was short-lived and in the top of the fifth, Shelbyville regained control with seven runs in the frame to open up a 13-9 advantage.

DJ Dillehay got the Wildcats’ rally started early in the seventh. Dillehay hammered the first pitch he saw to left field for a solo home run to cut his team’s deficit down to 13-12.

Two batters later, Jayron Morris was able to work a walk in his at-bat and James Sell came in as the pinch runner for the Wildcat catcher. One play later, Sells scored as Joe Duncan reached base on a bunt single. Errors on the same bunt play allowed Sells to plate the game-tying run and move Duncan over to third base.

“There are many times during this game where we could have folded and we could laid down. I’m extremely proud of this group purely for the grit,” said THS Head Coach Bryan Morris. “We had a rough time on the mound, particularly at throwing strikes and every time that we did, Shelbyville did a really nice job at the plate.

“We were in a hole most of the night. The guys just continued to fight and that’s something that we are going to have to do with the injuries that we have. We have to continue to fight and just give ourselves a chance.”

Tullahoma previously notched a 14-10 win in Shelbyville to lead off the series with a victory. The Wildcats led 9-1 after three innings, before the Golden Eagles trimmed its deficit to 9-7 in the bottom of the fifth.

Quickly though, the Wildcats were able to bounce back and plate five runs in the top of the sixth to open up a 14-7 advantage. Shelbyville plated two runs in the bottom half of the sixth inning and then added another run in the seventh, before Tullahoma notched the victory.

Evan delivered a big shot during the Wildcats’ scoring run in the top of the sixth inning. On a 2-2 count, Evan was able to get ahold of a pitch for a three-run home run to left field to put his team up 14-7.

Sheffield also drove in three runs for Tullahoma, while Duncan and Cayden Tucker both added two RBI. Dillehay and Colton Emory both drove in one run for the Wildcats.

Trenton Sholey got the start and the win for Tullahoma on the hill. In four innings, he allowed three runs, two of which were earned on three hits and two walks. Sholey additionally struck out five batters.

Cannon Emory tossed an inning for Tullahoma and surrendered four runs on three hits and a walk, while he additionally struck out a batter. Dillehay pitched the final two innings for the Wildcats and gave up three runs, one of which was earned, on a hit and five walks. Dillehay also struck out three batters.

Jaxon Sheffield led off the bottom of the first inning with walk. He later scored when Jayron hit a sacrifice fly.

Shelbyville reclaimed the lead with four runs in the top of the third inning to open up a 5-1 advantage. Tullahoma chipped into its deficit with a pair of scores in the bottom of the frame.

Sheffield led off the bottom of the third with a triple and scored on the next play when Dixon lined a double into left field. Dixon later scored on passed ball to make it a 5-3 contest.

The Wildcats loaded the bases in the next at-bat as Sheffield drew a walk. Dixon grounded into a fielder’s choice and was out at first base, while Ragan was able to score on the play. Dillehay then reached on an error and both Evan and Sheffield were able to score to put Tullahoma in front 7-6.

Melton was hit by the pitch in his at-bat and Sells came in to pinch run for the Tullahoma pitcher at the time. Jayron grounded into a fielder’s choice and was out at first, but he was able to plate Dillehay. Duncan added the last run of the inning with a double into left field that scored Sells to give the Wildcats a 9-6 advantage.

Shelbyville didn’t wait long before reclaiming the lead. Hunter Wilhelm added the final blow of the frame for the Golden Eagles with a two-run triple to put his team up 13-9.

Colton followed with a single into left field to plate Melton. Sells scored the final run of the inning on a Shelbyville balk to make it a 13-11 contest.

Melton got the start for Tullahoma on the mound and received a no-decision. In four innings, he allowed six runs, three of which were earned on seven hits and struck out two batters.

Sheffield threw .2 of an inning for the Wildcats and allowed seven runs, one of which was earned on two hits and a pair of walks. Jaden Eggleston tossed 1.2 innings for Tullahoma and only surrendered a walk.

Evan got the win on the mound after entering in the top of the seventh inning. Tomlin pitched 1.2 innings and gave up a hit and struck out two batters.

“Eggleston came in and gave us some really good work on the mound and Evan came in and did a really nice job the last two innings,” Coach Morris said.

Tullahoma is scheduled to host Grundy County at 4:30 p.m. on Thursday, before taking on and Central Magnet at 6:45 p.m. the same day. The Wildcats will then welcome in Marshall County Friday at 6:45 p.m.

Tullahoma is then slated to open its final district series at home Tuesday against Columbia. The Wildcats will then travel to take on the Lions in Columbia Wednesday. First pitch on both days is scheduled for 6 p.m.