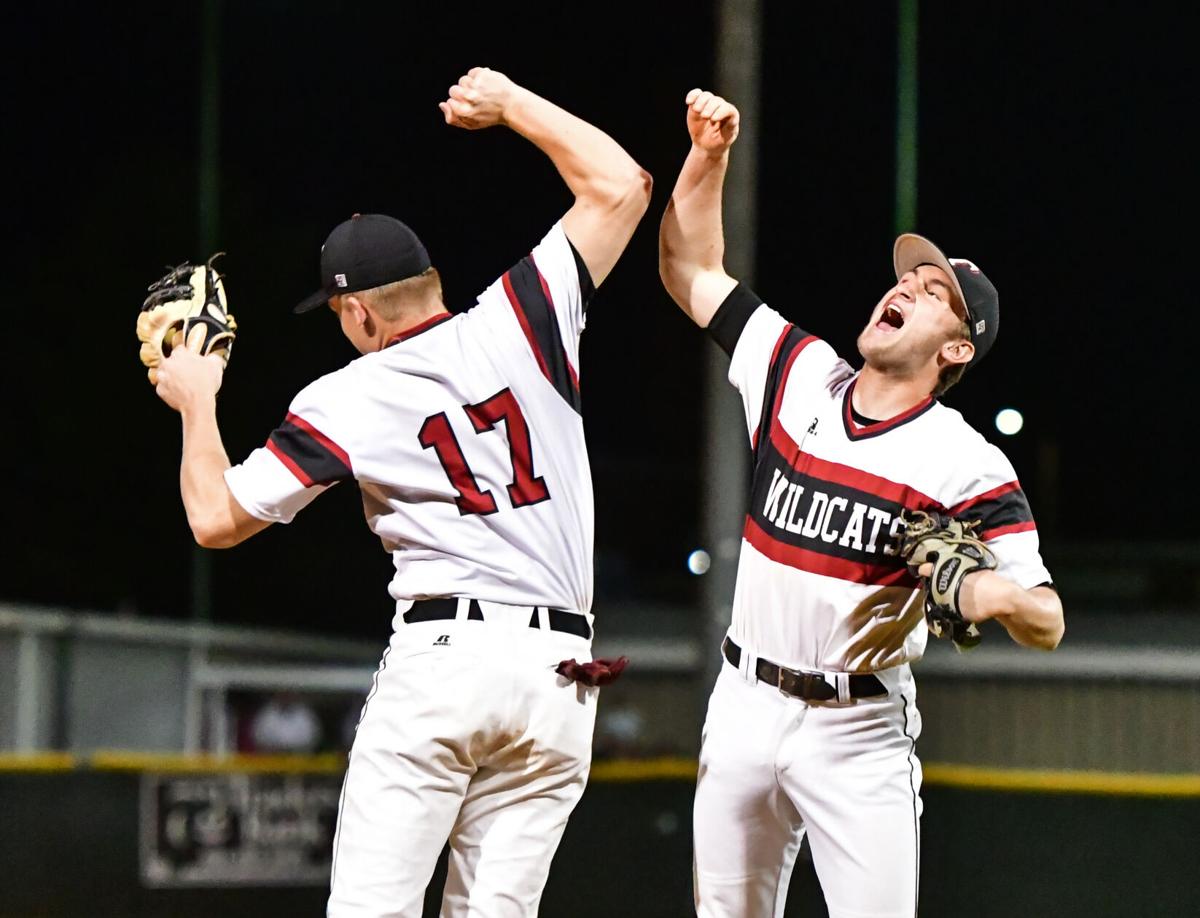 Tullahoma third baseman Brody Melton and center fielder Joe Duncan celebrate after picking up a 7-3 home win over Columbia on Tuesday. On Wednesday, Duncan tossed a complete game on the mound to help the Wildcats score a 5-1 victory over the Tigers in Columbia. 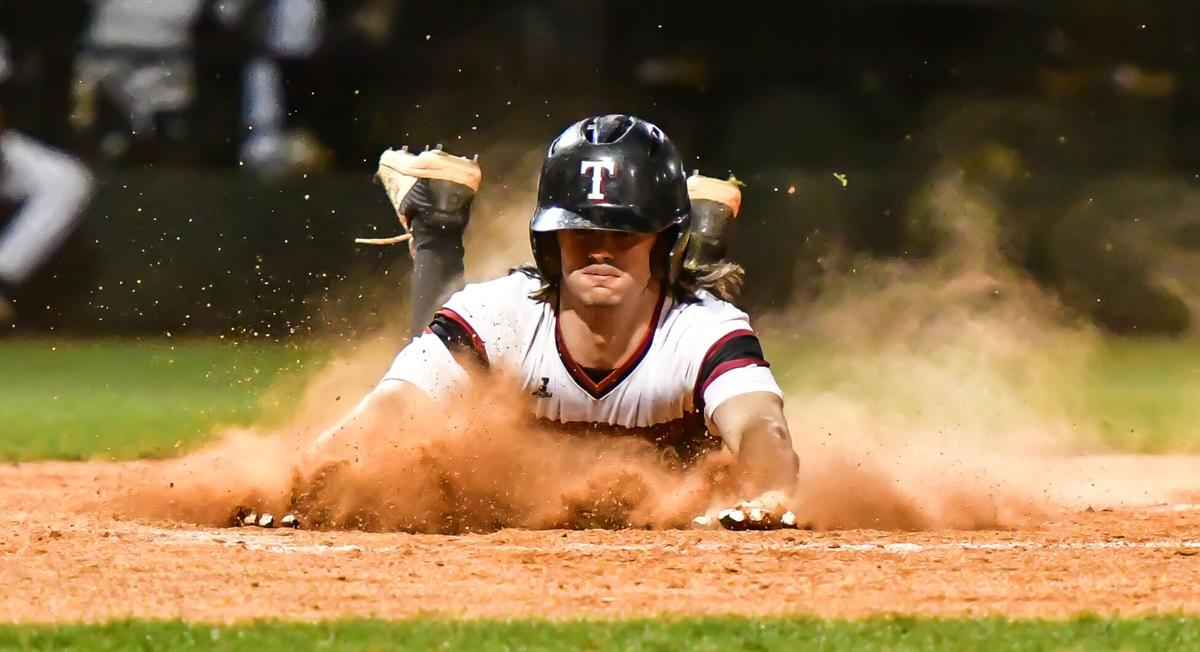 Evan Tomlin slides into home in the bottom of the sixth inning against Columbia on Tuesday. 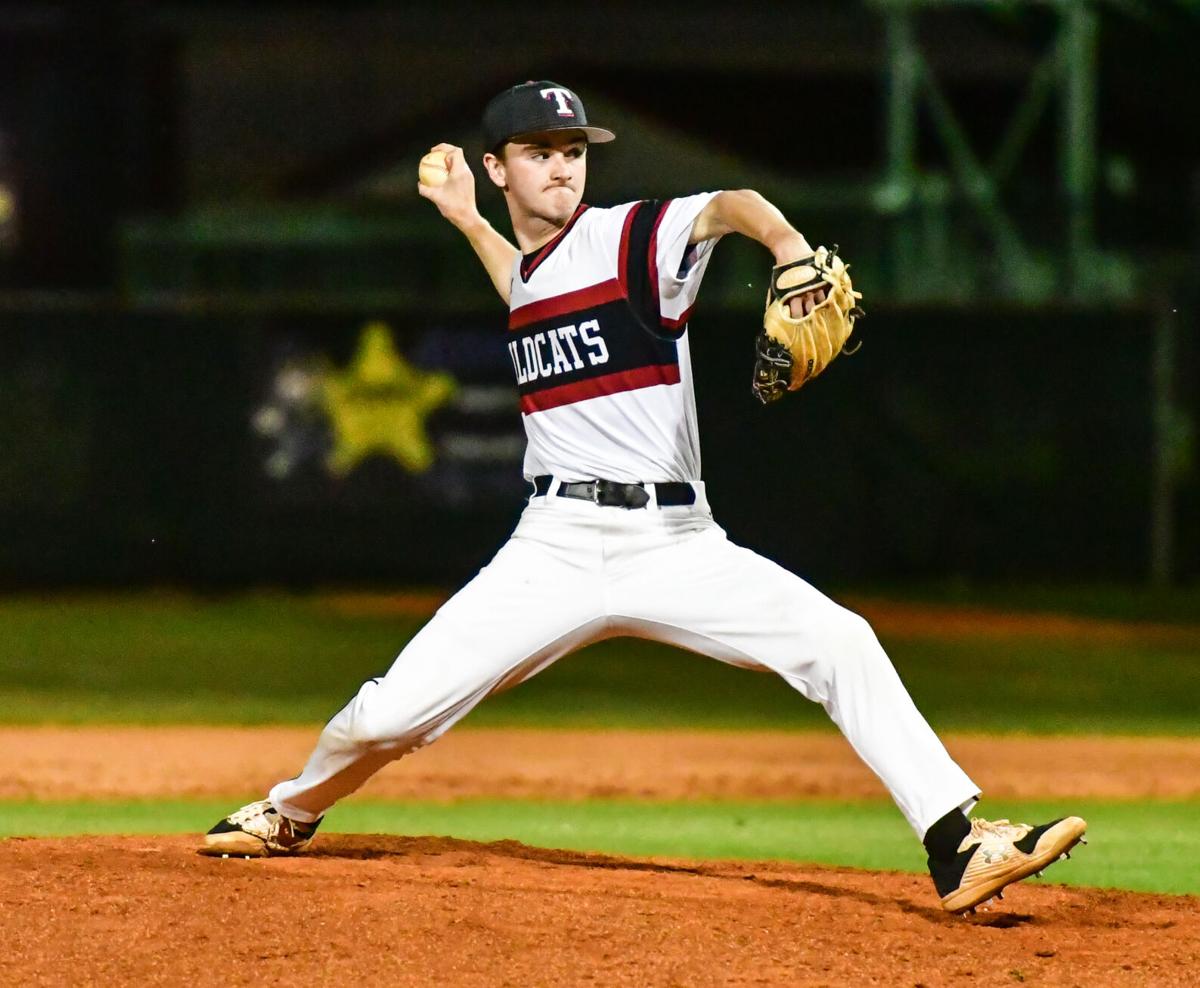 Cannon Emory pitches for the Wildcats on Tuesday night against Columbia. Emory tossed the final 1.2 innings and helped Tullahoma secure the 7-3 win over the Lions.

On back-to-back days, late scores helped Tullahoma clinch a pair of wins in order to sweep the season series with Columbia, as the Wildcats finished third in the District 8-AAA regular-season standings.

After trailing 2-0 early at home Tuesday, Tullahoma rallied and notched a 7-3 win in the first game against the Lions. A day later in Columbia, the Wildcats were able to spread four runs across the final four innings in order to notch a 5-1 victory.

With the win, Tullahoma is now 9-3 against District 8-AAA competition, placing them third in the standings. Lawrence County won the district regular season title with a 10-2 mark, while Lincoln County is second also at 10-2. Coffee County took fourth in the district standings with a 7-5 record. Columbia placed fifth in the district race at 2-10, while Columbia (2-10) and Shelbyville (2-10) finished sixth and seventh, respectively.

Game two of the series saw Tullahoma get a stellar pitching performance from Joe Duncan as he tossed the complete game for the Wildcats. In seven innings, he allowed an unearned run on a pair of hits and four walks and struck out seven batters.

Duncan got into trouble just once during his outing which came in the bottom of the seventh inning. After allowing three-straight walks with one out in the frame, Duncan was able to recover and get back-to-back outs to seal the victory. Duncan first got Gage Bolton to pop up to first baseman Jayron Morris, before Caden Czajka grounded out to end the contest.

Tullahoma helped out its pitcher in the top of the first inning after DJ Dillehay reached base on a two-out single. Dillehay later stole second base and scored when Melton lined a double into left field to make it a 1-0 ballgame.

Columbia answered back with a run in the bottom half of the third inning to tie the contest at 1. Bolton reached on an error and later scored on a two-out double by Konner Bowden.

That tie didn’t last long as Tullahoma regained control with a run in the top half of the fourth inning. Duncan drew a walk in his at-bat, before James Sells came in to pinch run for the Wildcat pitcher. Sells stole second base and scored when Morris singled into right field to put the Wildcats in front 2-1.

Dillehay singled with one out in the top of the fifth inning for Tullahoma. Deillehay stole his second base of the game and scored when Melton hit a base knock into center field to make the score 3-1.

Tullahoma tacked on its final two runs in the top of the seventh inning to open up a 5-1 advantage. Melton and Morris drew walks in their at-bats and both scored on a two-out, two-run double by Colton Emory.

Czajka took the loss for Columbia and pitched three innings. He allowed two runs, on four hits and a pair of walks, while he struck out two batters.

Ta’Vin Barner tossed the final four innings for the Lions. He surrendered three runs on four hits and four walks, while he punched out two batters.

During Tuesday’s series opener, Tullahoma fell behind early as Columbia plated a pair of runs in the top of the third inning. The Wildcats answered back though with two runs in each the fourth and fifth inning, before tacking on three more scores in the sixth.

“Anytime you can be down in a game and come back and win and win convincingly, it’s always nice,” said THS Head Coach Bryan Morris. “I don’t think anybody panics when we are down. I don’t panic, which I guess is where it starts. They stay in the game and they keep their energy. They are starting to learn that they have to do it together.

“There isn’t a single kid on this team who can win the game by themselves. They are starting to understand that it’s one team, one heartbeat and that’s how we are going to give ourselves a chance to make some noise during the tournament.”

Bowden and Luke Uselton gave Columbia the early lead in the top of the third inning. Both Bowden and Uselton had RBI singles to put the Lions up 2-0.

Dillehay reached base with one out in the bottom of the fourth inning after being hit by the pitch. He scored shortly when Melton hammered a double into center field. Morris later drove in Melton with an RBI single into right field to even the contest at 2.

Columbia cut into its deficit with a run in the top of the sixth inning. After a pair of walks and a hit batter, Lincoln English was able to get an RBI after he was plunked by the pitch to make it a 4-3 ballgame.

Tullahoma padded its lead with three more scores in the bottom half of the sixth inning. Morris drew a walk during his at-bat, while Morris reached on an error and Tomlin singled to load the bases.

Tucker hit a sacrifice fly in his plate appearance that scored Morris. Four pitches later, Jaxon Sheffield lined a double into right field that scored both Colton and Tomlin to put his team up 7-3.

Sholey got the start for Tullahoma on the hill and notched the win. In 5.1 innings, Sholey surrendered three runs, one of which was earned, on four hits and three hits, while he additionally struck out seven batters.

“He did ok, but I don’t think he had his best stuff tonight,” Coach Morris said. “With that being said, he did well by keeping us in the game and competing to get us to the sixth inning. He didn’t have his best stuff, but he did exactly what you’re supposed to do as a starting pitcher and kept it close and gave us a chance to win.”

Cannon Emory tossed the final 1.2 innings for the Wildcats and gave up just a hit and three walks, while he punched out two batters. Cannon got into trouble just once during his outing when Columbia loaded the bases with two outs in the bottom half of the seventh. However, Cannon was able to get Hudson Adams to ground out to end the contest.

“Cannon was a little out of whack with his mechanics early on,” Coach Morris said. “Usually when he’s on, he’s automatically in the zone. It took him a little bit to get it back together.

“When I went out there with the bases loaded, I asked him, ‘What do you think I should do right here?’ He looked at me for a second and said ‘I want it, Coach.’ I’ve been looking for that from some of our guys and I was glad to see Cannon take that approach and want to be that guy, so that was nice to see.”

Uselton took the loss for Columbia. In 5.2 innings, he allowed seven runs, four of which were earned, on six hits and a pair of walks, while he additionally struck out a batter.

Sam Pate tossed the final .1 of an inning and allowed a hit.

Tullahoma (20-9, 9-3) is scheduled to host Community on Friday for senior night with first pitch taking place at 6:30 p.m. The Wildcats are then scheduled to  take on White County twice on Saturday with game one getting underway at 5 p.m.

The Wildcats are then slated to close out the regular season Monday with a home game against Grundy County. First pitch is scheduled for 6 p.m.